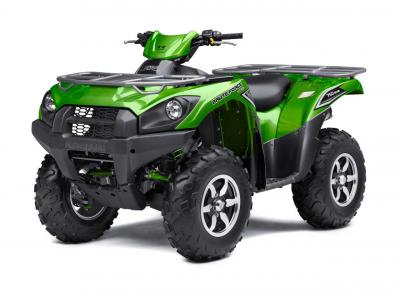 The Kawasaki Brute Force® ATV family boasts STRONG features that include Electric Power Steering (750 4x4i EPS and EPS Camo models), either a 749cc V-twin or a 271cc single-cylinder engines and all models are designed to suit a variety of needs and budgets. The Brute Force 750 4x4i models also feature four-wheel drive to help ensure you reach your destination, even in tough conditions, while the price-friendly Brute Force 300 is available in rear-wheel drive only.

All Brute Force ATVs are constructed around a sturdy frame that is built Kawasaki STRONG. Along with dependable engines and proven Kawasaki performance, the Brute Force family is the perfect transportation for a fun weekend ride, a fishing trip or getting around the work site.

Powered by a fuel injected 749cc V-twin engine, the Brute Force 750 4x4i EPS and EPS Camo can be ridden in either two- or four-wheel drive modes, which are selected at the touch of a button on the handlebar. It also has the benefit of Variable Front Differential Control for the limited-slip front differential, ensuring plenty of traction when it’s needed.

Power is transmitted through the Kawasaki Automatic Power-Drive System (KAPS) for the Continuously Variable Transmission (CVT) to ensure smooth power delivery and always the right amount of torque for the task at hand. These models also feature Electric Power Steering (EPS), making it easy to maneuver off-road, and allowing riders to stay in the saddle longer by reducing fatigue. 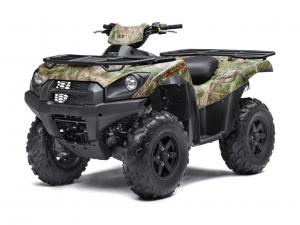 Equipped with powerful disc brakes and double wishbone independent suspension with 6.7” of wheel travel, the 2016 Kawasaki Brute Force 750 4x4i EPS and EPS Camo are ready for rough or tough conditions.

Not only can they handle the rough stuff, but these Brute Force ATVs look the part thanks to the rugged styling and attractive six-spoke cast aluminum wheels. The vehicle is also equipped with durable cargo racks with integrated tie-down loops.

The Brute Force 750 4x4i has the same powerful V-twin engine, flexible four-wheel drive system and limited-slip front differential as the 750 4x4i EPS models, although it does not have Electric Power Steering. It also uses the same sturdy frame and rugged bodywork, with the front cargo rack able to carry an identical 88 lb, with a capacity for up to 176 lb on the rear rack. Furthermore, all Brute Force 750 4x4i models are capable of towing up to 1250 lb thanks to an integrated truck-style 2” receiver. 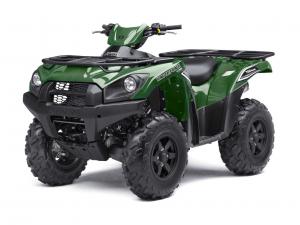 The Brute Force ATV family can be equipped with many Kawasaki Genuine Accessories that include snowplows (not available for the Brute Force 300), underbody protection, storage boxes, a winch and much more.

The third and most popular member of the Brute Force ATV family is powered by a capable 271cc single-cylinder, four-stroke engine that is tuned to deliver torque at low RPM for precise maneuvering. It is mated to a continuously variable transmission that provides responsive performance, smooth power transfer and useful engine braking.

Equipped with sturdy front and rear racks, the versatile Brute Force 300 can carry tools, animal feed or hunting gear into the backwoods and beyond. As with the Brute Force 750 4x4i models, the vehicle can also be equipped with a full range of Genuine Kawasaki Accessories. 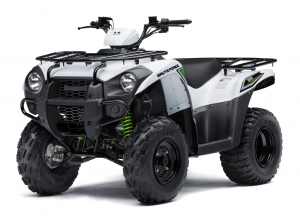 For a full spec sheet on the 2016 Kawasaki Brute Force 300, visit www.kawasaki.com.

Kawasaki Motors Corp., U.S.A. (KMC) markets and distributes Kawasaki motorcycles, ATVs, side x sides, and Jet Ski® watercraft through a network of approximately 1,100 independent retailers, with close to an additional 7,700 retailers specializing in general purpose engines. KMC and its affiliates employ nearly 3,100 people in the United States, with approximately 300 of them located at KMC's Irvine, California headquarters.

Kawasaki’s tagline, “Let the good times roll.®”, is recognized worldwide. The Kawasaki brand is synonymous with powerful, stylish and category-leading vehicles. Information about Kawasaki’s complete line of powersports products and Kawasaki affiliates can be found on the Internet at www.kawasaki.com.