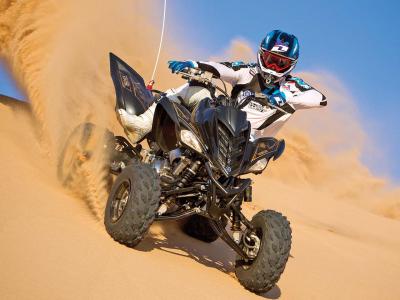 When it comes time to hit the dunes or trails, we’re looking for power in a great handling package and that means the Yamaha Raptor 700R. It’s been the perfect power and play machine since it was first introduced, and for this year Yamaha gave the mighty Raptor 700 a round of updates. Just to make sure you didn’t miss anything, they also bestowed the “R” designation to its name as well, but what it all means is the best machine in the class just got better.

A 686cc, liquid-cooled, SOHC engine fed by Electronic Fuel Injection drives the Raptor 700R and it has been our experience it is very reliable. It’s also very smooth thanks to dual, counter rotating, counter-balancers. With enormous torque, the engine refuses to stall, and the Raptor 700R transmission shifts very well and even features reverse which casual trail riders greatly appreciate.

Handling on the Raptor 700R is outstanding thanks to its high-tech, hybrid frame with geometry that is nearly identical to its smaller displacement, championship winning brother - the YFZ 450R. Also just like the 450R, the Raptor 700R is so good and so comfortable it’s actually easy to ride. For aggressive play riding or conquering the largest dunes, we’ll always take the Raptor 700R. That’s not to say we wouldn’t race the Raptor 700R, because we have and certainly will again, but for a play day, this is our pick. It’s the perfect complement to the YFZ 450R, and it’s the top Big Bore Sport ATV of 2012.