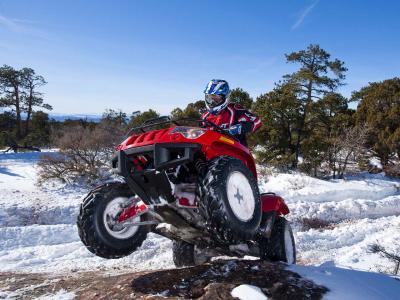 Of all the ATVs that offer power steering, none have benefited more than the 2010 Arctic Cats. When the Cat crew announced that several of their 2010 utility ATVs were going to feature variable assist power steering, they were almost a little apologetic about not introducing it a year ago, but they wanted extra time to develop the system as a package and not as a simple “me-too” add on. It was worth the wait.

In the Northwest corner of Minnesota where the giant Arctic Cat factory rises from the flat, surrounding prairie, even the building is a metaphor for the company as a whole. It’s solid, secure, unpretentious, and yet shows pride in the contents within.

The army of Cat employees who occupy the structure exhibit the same traits, showing up early and often staying late, each day doing their best to insure that every vehicle with a ‘Cat on the side is as perfect as they can make it. They are Arctic Cat. Their typical Midwestern values may not haven taken root in other regions, but it’s unapologetically how they do things in Thief River Falls. The other trait common to Arctic Cat is performance. ‘Cat employees love to compete, and we sometimes wonder if each one is a former or current racer. Imagine the competition for parking spaces in their lot! An example of their drive to win is the Thundercat 1000H2 ATV. Sure their 700 engine can compete with any big bore ATV on the planet, but somewhere deep in the development lab, somebody must have picked up an enormous piston and said, “Hey, why not use a couple of these in an ATV and really blow everybody away?” Today that quest for continuing performance has manifested itself in 6 new ATVs. 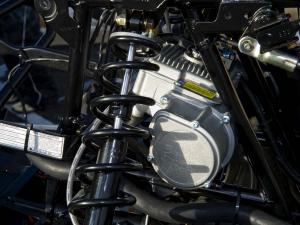 The “S” in each model name stands for power steering, and developing the Arctic Cat power steering system has been a 3-year process. Rather than grab off-the-shelf components, slap them on their existing ATVs, and hope for the best, the CAT engineering team developed the system specifically to match the performance of the ATV. The new system uses components similar to competing models, but together they form a variable assist power steering system unique to ‘Cat. 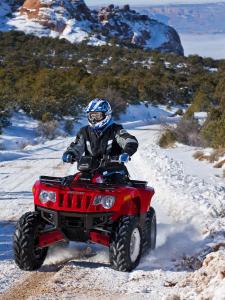 To offer effective power steering, the system must first measure wheel input force, and then the opposing forces at the handlebar. When it knows those two torque variables and vehicle speed, the electric motor can then apply enough input to either take up the wheel impacts that would ordinarily be transmitted back through bars, or help the rider steer more easily at any speed. The system is electromechanical, in that a brushless, electric motor spins a worm gear and matching drive gear at the steering shaft. At 14 pounds, it’s not exactly svelte, but it works! One advantage to the Arctic Cat variable assist power steering system is that it operates at much higher speeds, both on the input variables and the output, than competing systems. Regardless of what drives it, the Cat system is designed to provide consistent feel from the wheels at any speed. As you pick up the pace on the trail, the system gradually reduces its input so you always feel connected to the terrain. Since Arctic Cat is the only company marketing an ATV directly for mud racers, the power steering components are completely sealed to keep out any grit or water.

Our first ride on the 2010 Arctic Cats was on the rugged mountain trails near Moab Utah. From the valley floor to the tree line, there are huge elevation changes, and most of it is strewn with rocks ready to tear the bars from your hands. If there was ever a location to test power steering, this would be it. As we turned the new 550 H1 EFI S out of the parking lot and onto the trail, we were already impressed. Power steering input was very good and it provided just enough help to make it comfortable and easy, but not so much that it felt disconnected from the ground. For the first several miles, the ride was fast and slippery due to unusually high snowfall. Fortunately, steering was predictable here, because right next to the trail there were many huge drop-offs. Making things even more interesting was heavy fog that obscured anything beyond the ledge, and blowing a corner would be more than embarrassing, it would most likely be fatal. We love a challenge! 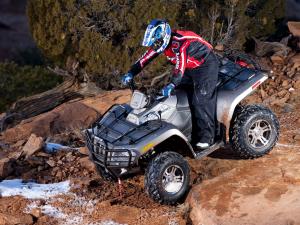 We’ve always found the Arctic Cat ATVs to be comfortable, and the 550 H1 EFI was no exception. Controls were well layed out, and the seat was plush; yet firm enough you didn’t sink into it like a worn out, lounge chair. We like the center-mounted, digital instrument package that tells you everything you need to know, but the Limited Edition units come with an old-school needle speedometer. It’s strictly a matter of preference, but we like the standard instrument package better. One EXCELLENT feature only Arctic Cat offers for 2010 is a new throttle housing that is much smaller and very comfortable. We like it! When Cat redesigned the throttle housing, they also changed the 4-wheel-drive / differential lock button attached to it and the new button is the best in the business. It’s easy to understand, works flawlessly, and is large enough to be used even with a heavy glove. At your left hand is the gear shifter which transfers easily between gears, and on the left handlebar are lighting controls and the single lever brake.

We’ll probably always wish for dual brake levers on the bars, especially on units capable of higher speeds, but both the foot-operated, rear brake and the handlebar-mounted brake work quite well. Both feet are anchored to a serrated foot peg riding above well drained floorboards, and the only time we wished for a taller peg was when they packed up with snow and became a little slippery. Just underneath the center-mounted display is a perfectly placed storage compartment that’s great for extra water, a map, etc, and closes securely. Sometimes so securely it can take a little effort to open, but we’ll take that any day over the door flopping open down the trail! 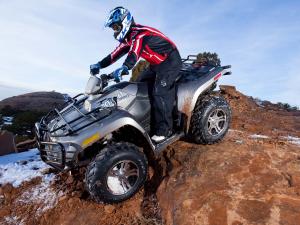 Climbing and crawling over rocks on the trail is always fun and because the Arctic Cat ATVs feature excellent ground clearance (11 inches on most models), few trail obstacles can stop them. It’s your fault if you get hung up! We found the tires do a good job of hooking up on either the solid rock or the loose terrain, and when sliding around a slippery corner, they hold their line well. We love the look of the cast aluminum wheels, and both the aluminum and the steel wheels are extremely durable. Suspension on the Cats is unique in that it features Arctic Cats “Ride-In” suspension which lowers the center of gravity as you climb aboard the machine and offers a supple initial shock stroke. All of the units we tested feature dual A-arm front suspension and dual A-arm Independent Rear Suspension, 10 inches of suspension travel at each end, and disc brakes to bring everything to a quick stop.

Our Moab mountain adventure would be a test of more than the suspension; it provided an excellent test of the engines as well. All of the engines we tested featured electronic fuel injection and our morning began with a sub freezing start, or what they would call “balmy” on the Minnesota prairie. Not having to use a choke is a wonderful thing, and despite the cold weather, all the engines fired up easily. We should have known a company from Minnesota that began as a snowmobile manufacturer would get this part dialed in perfectly! After a few minutes of warming up the engine, we headed down the trail. Throttle response was predictable and controlled whether coming off idle or at high rpms. 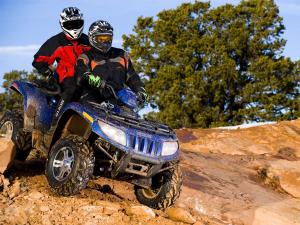 The trails we chose had enormous elevation changes, and we were actually going to ride well up the mountain and then continue higher on snowmobiles where the trail ended. As we made our way higher, the EFI equipped motors easily purred along, never sputtering regardless of the climb. It was possible to tell the motors couldn’t help but offer a little less power in the rapidly thinning air, but then again, so did we! Finally as we cleared the last parking area and attempted to follow the sled riders, higher, deep snow brought our ATV adventures to a powdery halt. When we attempted to turn around off-trail, we quickly discovered the well packed sled trail was a trap for ATV riders, and what we thought was only a few inches of powder turned out to be thigh high or better! After much pulling, rocking, and turning, we extricated ourselves, and 4wd proved invaluable to getting us out. It was amazing we went through as much snow as we did!

We love to ride anywhere, but it’s rare for any manufacturer to launch a new model on terrain or in

conditions that may not favor them. Arctic Cat launched 6 new units in extreme conditions and in unforgiving terrain, and that says a lot about the confidence they have in their ATVs. During our ride, the engines ran extremely well and offered good power, and variable assist power steering made the handling predictable and confidence inspiring. After a day of riding, we feel the new models are the best Arctic Cats ever. 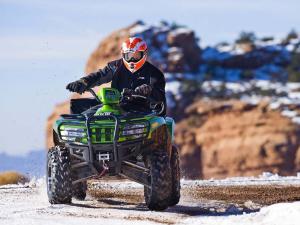