The Keeper of the Flame
Written By:
Staff 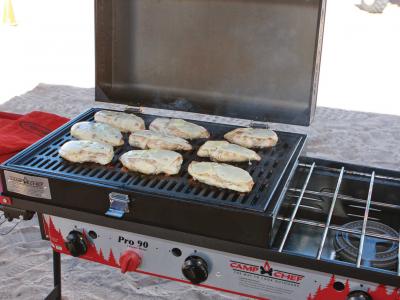 Part of the fun in any outdoor adventure is cooking out, and it seems everything tastes better outside.  For the past few years, Yamaha has been partnering with Camp Chef to provide the cooking gear for our desert oasis and they could hardly do any better.  Camp Chef has a huge lineup of high quality outdoor cooking equipment.  Whether you’re grilling brats at a pre-game tailgate party outside the stadium, making flap jacks for the crew at the hunting cabin, or warming up a single can of soup on your climb to the summit, they’ve got the perfect tool for you.

Matt Anderson is the keeper of the flame at Camp Chef, and he was on hand for our Yamaha desert adventure working his skill behind the grill.  Frankly, we love seeing Matt in camp.  We know we’re going to try some great food with Matt around and, as usual, we were not disappointed.  Matt also usually brings along some of Camp Chef’s cooking gear to check out, but this year he had something really cool!

You’re never going to cook anything with a lantern (we can barely manage it with a stove!), but Camp Chef introduced a camp lantern this year that was unlike any we’ve seen.  The Summit Solar Lantern lights up the dark as one would expect, but the cool part is it has two solar panels on top that charge its internal batteries during the day.  Should you need batteries for something else, they can be removed and used elsewhere, then reinstalled in the lantern for a recharge.  Best of all, the side of the Summit Solar Lantern has a USB port and it can charge your phone or mp3 player from its batteries and solar panels as well.  You’re right; there is something inherently wrong with using your phone so much at camp it actually needs a recharge, but if you do, Camp Chef’s got you covered. 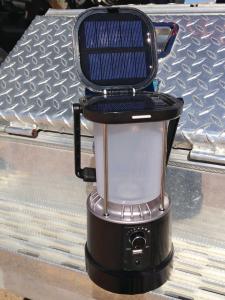 Matt brought along two other nifty pieces of gear this year and both would be welcome in any camp.  The Big Gas Grill is a three burner wonder with plenty of cooking space, separate heat controls capable of generating 30,000 BTU’s, and a preseasoned cast-iron grill grate that sears the meat perfectly, trapping flavors in.

Whether you want to fry it, smoke it, grill it, or bake it, Camp Chef has the perfect culinary tool for you.  We’re no chef by anybody’s standard, but this stuff is cool!  In shop terms, consider the Camp Chef gear the rolling cabinet full of new tools and socket wrenches for your outdoor kitchen.  Best of all, nearly every piece in the Camp Chef lineup works for bacon, and the only thing any better was Matt’s fried Oreos.  Does it get any better than that?  Thanks again, Matt!