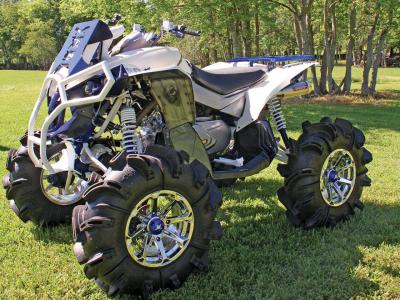 It’s the little details that can make or break any project.  Ben Darbone of Scott, Louisiana is one rider who won’t let anything slip by.  As a safety inspector for a fire safety company, it’s his job to notice all the little things, but Ben doesn’t just turn off those skills when the day’s work is done.  Some people just can’t help bringing their work home with them.

Like almost everyone who has ever swung a leg over a Can-Am Renegade, Ben loved the power, sporty look, and feel, while 4wd let him go places a traditional sport quad never could.  Ben isn’t a traditional guy, however, and when it came time to freshen up his 2009 Renegade, there was no way he could settle for a quick mechanical inspection and oil change.  It was time to do something unique, and what Ben ended up creating is probably the sharpest looking Renegade in the country.

There was no detail too small for Ben in this build project, and the first thing he did was strip the entire machine down to just a pile (more like several) of parts.  If it was metal, it would be sand blasted then powder coated, and if it was plastic, it would get a custom paint job.  Some parts would be replaced outright, but when Ben was finished, nobody would recognize the Renegade as the same machine.  Rather than tell you about every individual piece, we’ll show you Ben’s work of art here and let him tell the story. 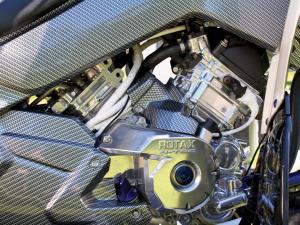 Thanks for showing us your Renegade project Ben.  First of all, what was the reason for taking on a build project like this?

B.D. “It was a good challenge for restoration, and I tend to go all out.”

What is your favorite type of riding and how long have you been at it?

Did you give the new machine a name?

B.D. “Since it’s all new from the ground up, I call it Ground Zero.”

Did the machine have a lot of miles before you stripped it down?

B.D.  “The quad was ridden hard and I sunk it once also.”

How did the Ground Zero project begin?

B.D. “I started stripping the bike down to the bare frame.”

How long did it take?

Did you do engine mods too?

Did you install a lot of new parts on this build also?

B.D. “Yes, plenty of new parts.  Most of the plastic is new; there is a new CATVOS 6" Suspension lift, Gorilla thru shaft, axles, bumper, and tires.  Also a new exhaust and new rims.”

Are you O.K. with getting it dirty again and riding it through the mud?  Is it a runner? 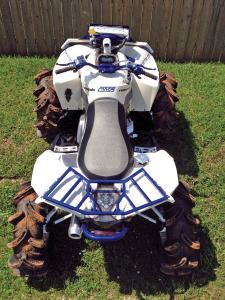 B.D. “It’s a runner and I plan on riding the bike and enjoying the bike after many hard nights in my shop of working on it. I am proud to say, I did about 90% of this build on my own in my shop with everyday tools.”

What award did you win at the Mud Nationals?

B.D. “First place in the Bad to the Bone contest, and that’s the one that is most important to me because it’s picked by the people.”

What was your favorite part of this project?

B.D. “Hearing the engine fire up after almost 2 years.”

B.D. “Waiting for parts to come back from vendors.  Also hearing my wife complain about the long nights in the shop, and amount of money being spent.”

So what’s next from Ben’s Workshop?

B.D. “My next build project will be my Can-Am Commander 1000.  I’m starting on that one in June.  I probably won’t do the whole frame like I did on this project though because of the size, but I’ll do lots of powder coating and airbrush work.”

Thanks Ben!  We can’t wait to see it!  You know people are going to expect a lot out of you on this next project also?

It takes a lot of skill, dedication, and attention to detail to create a machine like Ben Darbone has with Ground Zero.  It’s the ultimate in customization for those with the talent to make it happen.  After all that effort, we’re not even sure we could take it back into the swamp like Ben intends to, but it doesn’t faze him.  He’ll just create another.