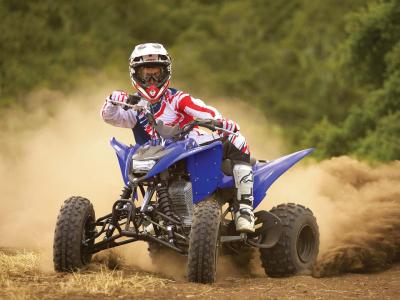 Utilizing the core elements of their philosophy such as innovation, forward thinking and technology, the design gurus at Yamaha Motor Corp. have once again put their collective minds together and produced several changes to some current models for 2011, as well as a brand new model that should fit well within the ‘newbie’ sport riding sector of the ATV industry.

Perfect for riders who might be intimidated by the larger size of the Grizzly 550 and 700, the Grizzly 450 has been a welcome addition to the fully encompassing Yamaha utility line-up. Not content to simply be a stripped down version of the bigger bears, we are pleased to see that in 2011 this slightly scaled down version of the very popular Grizzly 700 and 550 now comes with several new features, including Yamaha’s excellent feeling Electric Power Steering for superior handling in any situation. This power steering unit even received its own ECU mapping – unique to the handling characteristics of the 450 – to give it the most accurate feedback responses possible. In addition, the 2011 450 continues to boast such features as IRS, On Command Diff Lock, and a digital meter readout. While it’s a smaller package, it’s certainly not a lesser one! 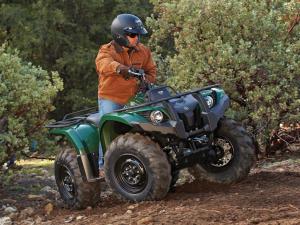 Along with the addition of EPS, the 2011 450 Grizzly EPS and non-EPS models boast a newly redesigned and lightened (6 lbs lighter!) chassis that is now a one-piece unit, which has been structured to compliment the EPS system. In addition to the new chassis, new front suspension points have also been created and go hand in hand with a new, anti-roll sway bar that offers up to a 20% increase in stiffness, compared to the 2010 model.

Yamaha also updated the Grizzly’s rear sealed brake system on the new 450 with three mounting points instead of two, and the system actuates on the pinion gear, as opposed to the ring gear on competing models – offering more braking leverage for less effort as well as less wear and tear on brake pads.

As with almost every model, Yamaha also has a number of accessories available for the 2011 Grizzly 450, including skid plates, hitches, winches and anything else a utility ATV could need. 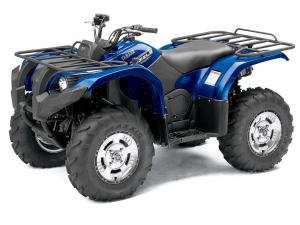 Yamaha continues to impress us with their sport ATV lineup which is hands down the best and most complete in the business. While other companies make half hearted attempts with models based on dated, or worse, warmed over utility technology, Yamaha is shifting it up a gear once again.

No doubt you have scanned ATV classified ads over the past few years and have seen a plethora of off-brand, entry level quads at ridiculously low prices, which many lave labeled as “disposable” quads. Theses quads have no actual dealer in many cases, parts are all but non-existent, and you're on your own when it rolls to a stop which usually is sooner rather than later. Imported from countries such as Korea, China and Taiwan, these quads often have a ‘shelf-life’ shorter than canned vegetables, which can leave new enthusiasts who have fallen in love with the sport subsequently quadless. This scenario did not go unnoticed at Yamaha, and true to their nature and knack for finding a market and then building a product to fill it, they decided to do something about it. The all new Yamaha Raptor 125 is designed to answer the call for new sport riders who have had a taste of the ATV lifestyle and like it, and are looking for a name-brand quad that boasts quality as well as affordability. 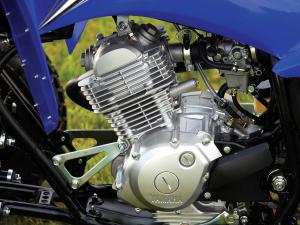 The first thing we like about the new Raptor 125 is the look! It's sporty and fits in perfectly with its big brothers. Body styling is sleek and aggressive just like the rest of the family, and leaves no doubt this quad was designed to play.

The Raptor 125 is powered by a newly designed 125cc, air-cooled, single overhead cam engine that produces a more mellow-feeling power. A 29mm Mikuni carburetor offers an electric heater to aid cold weather starts, and the carb was designed to work with minimal throttle effort. The Raptor 125 also comes with a smooth shifting, 5-speed transmission, and should be great for newer riders who are primed for learning how to use a fully manual transmission.

Yamaha wisely chose to give the new Raptor 125 a nearly identical chassis to the perfect handling Raptor 250, and we've named the Raptor 250 as ATV of the Year for it's outstanding traits. While the Raptor 125 shares the same chassis, swingarm and a-arm design as its big brother, the handlebar/footpeg/seat ratio has been updated to accompany a smaller sized rider more comfortably. 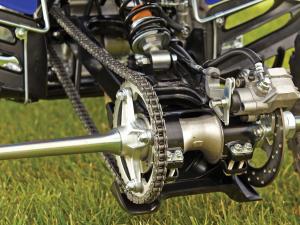 Completing the package on the new 125 are the same 5-way preload adjustable shocks that come standard on the Raptor 250, as well as a set of Maxxis tires (18” front / 19” rear) that were chosen to enhance the overall handling characteristics of this new little machine. What it all adds up to is a entry level, true sport ATV far more advanced than any of the cheap knock offs, and with a complete dealer network offering support and safety behind it. Now there is no reason to look at the knock-offs. As with the Grizzly 450s, there are a ton of accessories for this newest Raptor, and we can't wait to get one on dirt for a full test.

Not to be left out for 2011, the extremely popular Raptor 250 also received a noticeable change by way of a new special edition model. The special edition Raptor 250R now features compression and rebound adjustable piggy back shocks with threaded rebound on the front and a new, remote reservoir rear shock! Looking like miniature versions of the YFZ 450 shocks, this new suspension should improve the already superb handling on the Raptor 250, and will make this machine even more competitive on the track and trail. Nothing in its class can touch it!

While the economy is struggling to pick itself up out of the dirt, we're delighted to see that the top OEM’s have not taken much time off when it comes to continuing to develop, test and release the quality products and new models consumers are looking for. Hats off to Yamaha for a job well done!