Yamaha Gets back to Basics with their new YFZ450
Written By:
John Arens 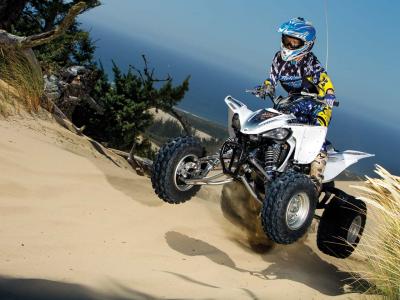 Twenty five years ago at Oregon’s Winchester Dunes, journalists got their first ride on Honda’s legend in the making, the TRX 250R. In production only 4 years, the 250R quickly became the standard for handling and performance that all sport ATVs thereafter would be judged by. By today’s standards, the TRX was narrow, had limited suspension, and put out only meager power, but as a package it worked. The lessons were not lost on the competition, although it would be another 15 years before they would manifest themselves in a new and very different model from a much more proactive manufacturer. It’s never easy to follow a legend, but today I would be riding an ATV with a legitimate claim to the title on the same giant hills where tracks were made so many years ago. I would be riding the latest version of Yamaha’s YFZ 450.

Yamaha owns the sport ATV category. They’ve got models for every size and skill level from the diminutive Raptor 125 to the dune taming Raptor 700, but if there was a model missing from the lineup, it was between the Raptor 250 and the Raptor 700. Sure, the awesome YFZ450R is there, but not everybody wants or needs a race ready 450 with a state of the art race motor, especially if they really don’t intend to do anything other than hit the trails. Yamaha needed an answer to the Suzuki Z400 and Honda’s 400EX. They’ve found one, and it was already in the Yamaha stable.

When Yamaha released the 2004 YFZ 450 high performance ATV, they ventured into territory no other OEM had dared enter for 15 years. Before the YFZ 450, none of the OEMs wanted to even discuss racing, but Honda’s 400EX and Suzuki’s LTZ400 had proven the viability and eagerness of an untapped sport market that had survived mostly with aftermarket support. While Yamaha still owned the dunes with their Banshee, the track and trail was the domain of the other guys. That was about to change. The new YFZ 450 was the sum of lessons learned from aftermarket racers: a powerful, liquid cooled, 4 stroke motor, and a racy new chassis designed to attack the track and trail like nothing before it. It took me exactly one lap around the fabled LACR race course to know Yamaha really had something special. 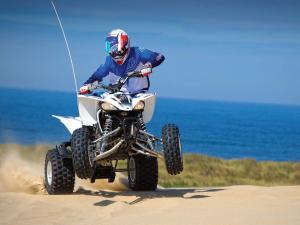 Since that time, competitors have jumped into the class only to disappear a couple years later, but Yamaha never wavered on their commitment to the sport by continually refining every part of the YFZ 450. For 2009 they clicked it up another gear when they released the completely new YFZ450R. All that development comes at a price, however. As the model was increasingly honed for the track, it became a little more intimidating for casual trail riders, and top of the line components pushed the price up as well. It was time for a model to fill a hole in the lineup.

When introducing any new model, the goal is to surpass any competitors. After all, there’s little point in being “just as good”, but you must also be at a similar price point. The problem Yamaha had was developing an all new model takes lots of time and money, and the development and tooling costs must be recovered. That put them in a bit of a conundrum, but somebody in the organization had a stroke of genius when they realized they already had a model that could fill the gap, be extremely competitive, and the tooling was already paid for! With some refinements for trail riding and a careful eye on the bottom line, they would be ready to go. Welcome to the new $6799 YFZ 450! 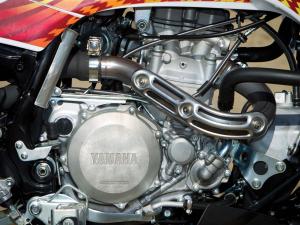 Yamaha’s new YFZ 450 will look very familiar to most riders. On the surface it’s very similar to the 2008 YFZ, but it has been optimized for trail riding with internal changes to the engine and suspension. A new cam delivers better bottom and mid-range power for casual riders, but at its heart it is still a liquid cooled, high performance, 4 stroke engine. An external oil tank sits ahead of the motor for optimum cooling of the dry sump engine, and a large radiator is tucked into the frame for protection. At the top of the cylinder is Yamaha’s 5-valve head and the engine puts out power competitive with any other 450 on the track. There is no reverse gear in the transmission, however, which may irk some riders, but electric start makes up for it, and I’ve never really wanted reverse gear on a performance quad anyway. Sometimes you just need to man-up and muscle your way out of a jam or steer better in the first place!

I had always felt comfortable on the first generation YFZ and when I climbed onto the new one, it was like hopping on my own ATV. I checked the tire pressure for what I normally run in the sand, adjusted the levers and throttle to the correct angle for me, and fired it up. Even though the new YFZ 450 does not have EFI, it quickly purred to life. One major change to this trail friendly version of the YFZ is the carburetor is now a 42mm Mikuni BSR. This was for better top end, reduced pull, and improved throttle response. After a few minutes of warm-up, I snicked it into gear and headed for the sand. 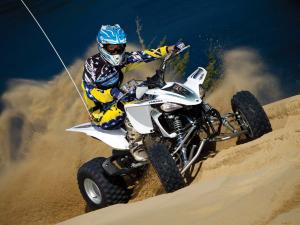 It was good to be riding a YFZ again in the sand. In many ways, this version works better for me than its all-out racing brother, the YFZR. It’s simply comfortable and confidence inspiring. As I picked up speed and followed fellow rider Bill Lanphier around trees, up and down dunes, and through whoop sections, I was taken back to my first impression from that first lap at LACR years ago: As a package the YFZ works, and it’s so easy to ride it makes me a better rider. What’s not to like about that?

The YFZ chassis responds to input very well. It’s easy to move around on the seat and even though some sport ATVs give you a feeling you are sitting “in-it”, the YFZ definitely delivers a feeling you are on top of the machine. When I hit the whoops, I would slide to the back, stand on the wide, sturdy pegs, grab the narrow tank with my knees, and keep the throttle pinned. The YFZ chassis and suspension responded extremely well and would track straight down the middle or wherever I pointed it. The steel tube chassis may be “old-school” as compared to the cast aluminum work of metal art that cradles the YFZR, but it works and it holds up. It also feels a little more forgiving on the track and more than a few racers actually prefer the steel chassis over the aluminum. Count me in that group. 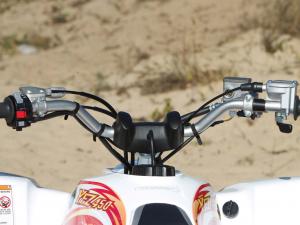 The front shocks on the new YFZ are nothing to get excited about and offer only 5 position preload adjustability, but in fairness, they do an adequate job in the sand. We suspect in choppy terrain or on a rutted trail it might be a different story, but on the up side they do help keep the cost down. The rear shock offers a piggyback reservoir and preload adjustability, and is attached to the cast aluminum swingarm via a linkage. One big advantage to the YFZ suspension is that there are plenty of aftermarket parts available when you want to upgrade.

As in the past, steering was precise, quick to respond, and we like the new front tires which get a good bite on the sand and turn rather than sliding. Even when you get a little out of shape, it’s easy to correct with a little skill and a stab at the throttle as I saw fellow journalist Corry Weller do on the side of a huge hill.

Sand typically saps a lot of power from any machine, but when it came time to challenge even the largest dunes at Winchester, the engine was up to it. The first time I pointed the YFZ at a 500’ high pile of sand, I think the YFZ was a little more ready than I. After all, I had not ridden here before, nor had I been on this model in a couple years. With a little courage, a firm grip on the bars, and a healthy dose of help from the engine, I was quickly rocketing towards the top. Since the sand was perfectly smooth, I made the customary sweeping turn just short of the ridge throwing roost over the top, and I was soon racing back down the face in top gear. Just as I remembered, the YFZ shifts very well with positive engagement even when under power. I also like the more forgiving throttle return spring on the new carb and throttle. They’re much easier on your thumb after all day rides. 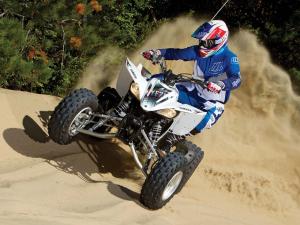 Yamaha designed the engine to provide plenty of power in the open, but also to be easy to control in tight sections. It works extremely well for both. The Winchester Dunes offer much more than unending sand, and there are plenty of very tight, twisty trails that wind through the woods as well. It was a blast to drop down from the sand into the woods, chase each other through the pines, then rocket back uphill, and the YFZ motor made it easy. Everyone in our group really liked it! At the end of the day, I didn’t want to give it back or to leave. The YFZ450 is a great dune buddy!

I’ve not wavered in my belief that Yamaha had something special in their original YFZ 450. With the 2012 YFZ 450 they still do; it’s quick, precise, powerful, easy to ride, and confidence inspiring. Perhaps the feature most will get excited about with the new YFZ450 is the price. At $6,799 it’s actually $200 LESS than the original, and this one has all the updates. That places it squarely in the 400cc class price range, and over $1200 less than any other 450. A little less cash up front leaves more for upgrades later, which is just what most riders want.

So is the YFZ 450 worthy of being called a “legend”? Only time will tell, but all legends are made based on the performance in their own day. There is always room for another at a later time, but in almost every case, the best traits of the first are found in the second. What the TRX had going for it, the YFZ 450 and now the YFZR 450 incorporated and expanded on, as they should have and that certainly meets part of the criteria. Any way you look at it, though, the Yamaha sport ATV lineup is a lot like the New York Yankees. The roster is full of all-stars and when you look beyond the starting player – the YFZ 450R – there’s another all-star on the bench ready to play.