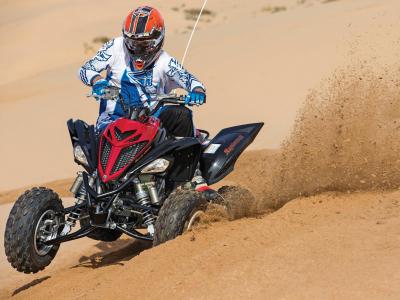 Every rider that loves the dunes needs a trip to the Mecca of dune riding at least once.  Southern California’s Imperial Sand Dunes, a.k.a. Glamis, is to dune riders what Fenway Park is to baseball fans; it’s the heart and soul of their sport, and until you actually go there, it’s a little difficult to understand.  The Glamis Dunes are 6 miles wide and 45 miles long, running right up to and beyond the Mexican border.  We were determined to ride every bit of it and Yamaha had just the vehicle to do it; the new Raptor 700R.

Yamaha broke new ground when they introduced the hybrid Raptor 700 chassis years ago.  Rather than a traditional tube chassis, Yamaha gave the Raptor a hybrid frame utilizing both traditional round steel tubing, where strength and the ability to flex was needed, and major cast aluminum components in other areas for light weight.  At the rear the Raptor 700 received a cast aluminum sub frame, and we really like how the bodywork fills in the void below the easy access air box above the swing arm for a very clean look. Down below, a cast aluminum swing arm also gets an eccentric-style carrier for quick chain adjustment, a familiar suspension linkage, and for 2013, a twin piston brake from the YFZ450R.  The advantage of the new brake is better feel and stopping power along with manufacturing efficiency.  Previous models had included a wave rotor for lighter weight, but it was found a standard, round, drilled rotor actually stopped a little better.  Front suspension on the Raptor 700 relies on traditional dual A-arms with 9.1 inches of wheel travel, and it is the shocks that mark a major difference between the different Raptor packages. 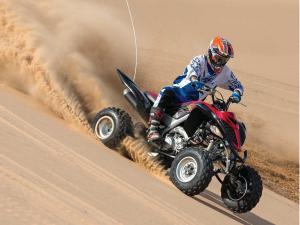 Yamaha likes to equip their racing and special edition models with premium shocks, and both the Raptor 700R and 700R Special Edition model get front shocks that offer a piggyback reservoir with High and Low speed compression adjustment, adjustable rebound, and threaded preload adjustment.  The front shocks of the base model Raptor 700 feature only preload adjustment.  At the rear of the 700R and 700R SE is YZ-style piggyback shock with high and low speed compression adjustment, preload, rebound adjustment, and 10.1 inches of wheel travel.  All models of the Raptor 700 get new Maxxis tires with a stiffer sidewall for less tire flex and more predictable slides.

We’ve always liked the Raptor 700’s 686cc, liquid-cooled, SOHC engine.  The big 4-stroke is fed by EFI, and it refuses to quit.  Vibration is non-existent thanks to dual, counter rotating, counter-balancers and it has gobs of power everywhere in the powerband.  Even though the engine has immense torque, it’s still easy to control and you can practically run across the dunes in any gear with no fear of stalling.  Yamaha gave the Raptor 700 engine a forged lightweight piston, connecting rod and crankshaft for ultimate durability and it will rev to 9000 rpms with no complaints.  Our only complaint is the motor is a little heavy, but it’s still an enormously fun power plant. 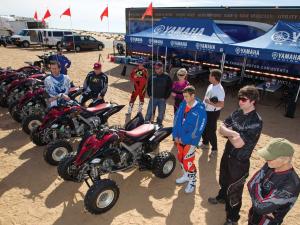 Raptor 700 styling has always reflected the machine’s sporty nature, but seating position was much more upright than on the racy YFZ450 or 450R.  It was designed for comfort for all day rides rather than a quick moto.  About our only complaint was the front fenders were closer than we would have preferred and often times during aggressive cornering, we would rub our knee on the front fenders.  That changed for 2013 and Yamaha was able to maintain the narrow seat and tank feel, but moved the front fenders 2 inches forward for more knee room.

Yamaha gave the Raptor 700 a new, vented nose piece for 2013, but at the top of the new nose piece the small digital display has been replaced with a lighted panel showing gear selection and a few warning lights.  It’s all you need, and we never looked down at the old digital display on the trail anyway.  In the saddle everything feels perfectly placed on the Raptor 700.  The narrow tank is perfect for sport riding, the seat offers an aggressive position for charging ahead, but it’s still comfortable for all day trail rides.  Handlebars are exactly where they should be, and there is plenty of room between the seat and the pegs. 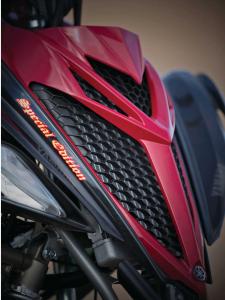 A brand new Raptor 700R and 200,000 acres of sand to play on is our definition of a good time!  We had several days ahead with the new Yamahas and we couldn’t get out in the sand soon enough.

There’s nothing like shifting up through the gears and heading off for a day of play on a great sport machine.  Everything feels natural on the Raptor 700R and heading across the sand the Raptor seemed as anxious as I was for a couple days of play.  Before long I was at the base of the big dunes and a firm stab at the throttle brought an instant response from the engine.  Climbing skyward was a blast and one of the things I love most about Glamis is that we never cross directly over the peaks.  Glamis seems to require its own riding style actually, and rather than blasting over the top of each dune, only guessing what is on the other side, the usual method is to carve a big, sweeping arc near the top and either race back to the bottom, repeating the move on the next giant dune, or to pop over the ridge at an angle.  The Raptor 700R is perfectly suited to both.  Enormous power lets you conquer any dune with ease regardless of size, but it’s also very easy to shift your weight on the Raptor 700, especially with extra room from the redesigned front bodywork.  The 700R can make you lazy, however.  Even though the Raptor shifts easily, with a powerband seemingly as wide as the dunes themselves, you can lug it across the sand in practically any gear, and we have.  The Raptor 700 is extremely easy to ride.  Rocketing up and down the huge hills and around the enormous bowls at Glamis lets you test one other thing: suspension. 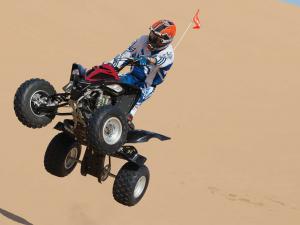 Often times there are choppy wheel tracks from many other vehicles to contend with, and Yamaha designed the suspension on the Raptor 700 for comfort.  On the base model, the suspension does a good job for most situations, but the adjustability on the 700R and 700R Special Edition models can be dialed in perfectly for your riding style.  We like it!  Blasting up and down the huge dunes you can often feel the G-force as the suspension is compressed, but even though we’ve managed to bottom it out at the bottom occasionally, it’s never done anything unpredictable.  It’s also good off jumps which there are plenty of in the sand.  At times you can feel a little extra weight from the big motor, but it’s very confidence inspiring in the air and we launched it every chance we could get and as far as we dared to fly.  About the only area where the Raptor struggles is in slides.  It’s not as wide as its racy brothers, the YFZ 450 or 450R, and with the extra weight, it takes a little more effort to really get the back end sliding, especially in the sand.  Overall though, the Raptor 700 is born to be in the dunes.  It’s a natural.

Yamaha’s Machine For The Ages

As much as I love riding utility ATVs and driving Side x Sides, climbing aboard a high-performance machine like the Yamaha Raptor 700R is like getting back to one’s roots.  It’s a time machine – It’s pure play, and isn’t that why we all began riding in the first place?