We tackle the toughest rocks in Utah
Written By:
John Arens 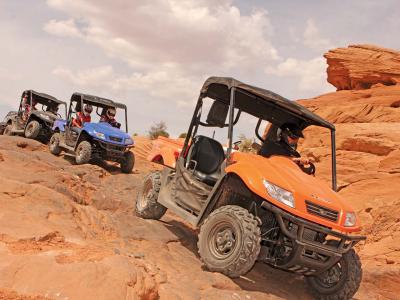 Last year we spent a couple days prowling around the woods of South Carolina on KYMCO’s UXV 500i and it performed extremely well crawling over downed timber, crossing streams and mud holes, and maneuvering through the tight trees.  This year we would be giving the UXV an entirely new challenge and rather than the Eastern woods, we would be taking it into some of the toughest, yet most beautiful terrain on the planet.  Saddle up for UTAH!

When you want to test a machine’s capabilities, a good start is by looking for rocks, hill climbs, deep whoops, and desert heat.  Moab, Utah offers all that and more.  When area Uranium mining ground to a halt in the 70’s, off-road lovers soon began to trickle into town not only for the incredibly beautiful scenery, but to test themselves and their machines in the deserts and canyons.  Today a large portion of Moab’s economy is based on tourism dollars, much of that coming from off-roaders.  With the annual Rally on the Rocks UTV rally in town, it seemed like the perfect time to get the UXV 500i out for its desert test.

From our previous trips to Moab, we knew the terrain can be tough regardless of what you’re riding, and when we pulled into the pits, it quickly became evident just how tough others thought it would be as well.  Everywhere there were long travel machines outfitted with huge tires, extreme suspension travel, and just about every accessory you could bolt on.  ‘Nary could a stock machine be found other than our KYMCO UXV’s, and we began to wonder if we’d bitten off more than we could chew.  At this point it didn’t matter; tomorrow was trail riding day and we always love a challenge.

The UXV 500i is designed as a “crossover” machine.  That means it’s meant to do a little bit of everything well, from hauling garden tools and hay bales to weekend trail rides.  This would be on the extreme end of the trail riding spectrum and an excellent test for the UXV.  In the tight canyons, rugged trails, hair raising hill climbs and endless rocks that make up the MOAB experience, it doesn’t take long to discover a machine’s reliability, maneuverability, and durability. Once committed to the MOAB trails, there’s no other way out. 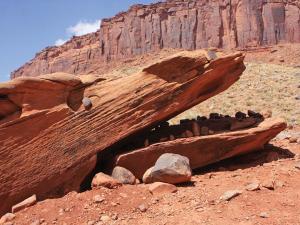 The UXV 500i is built on a solid, sturdy steel chassis with independent suspension at all corners, dual a-arms, and adjustable oil filled shocks with coil springs.  Suspension travel at each wheel is listed at 7.5 inches and we would be using all of it.  KYMCO outfits the UXV with steel wheels and Kenda tires on most models (which we’ve found do a good job in the mud), but the Limited Edition and Special Edition UXV models come with great looking and super durable cast aluminum wheels.  Disc brakes at all corners bring everything to a quick stop,

A 499cc, liquid cooled, DOHC engine powers every UXV regardless of model, but Electronic Fuel Injection is available and it’s well worth having.  Thanks to EFI, you can expect instant starts regardless of temperature, consistent operating temperature, and better fuel economy.  KYMCO engines have always been super reliable, and the UXV power plants live up to the family reputation.  While a 500cc engine is decidedly in the mid-range of Side x Side performance, the engine delivers a claimed 36 horsepower.  No trophy girl is ever going to hand you the checkered flag with the stock UXV engine, but it does exactly what it was designed to do.  It gets the UXV up to speed quickly with no hesitation and with enough power on tap for hill climbs or pulling a load.  Top speed is in the mid 40’s, which is right in line with other models of similar displacement and we believe the power is well matched to the chassis. 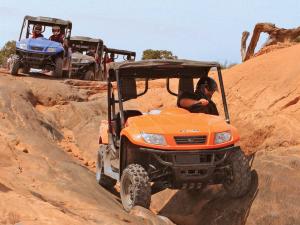 Mated to the engine is a CVT transmission that features Hi, Low, Neutral, and Reverse.   Switching between gears is as simple as sliding the right hand lever (found between the driver and passenger seats) into the gear of your choosing.  Shifting is smooth and the CVT “gearing” seems good whether ramping up during acceleration or when backing off the easy-to-control throttle.  KYMCO has a huge amount of experience with CVT transmissions and it shows.  When 4wd drive is needed – and it often is in Moab – a dash mounted switch gets the front wheels grabbing for traction.  When you’re really in trouble, a front differential lock is ready to help pull you out.

We’ve always liked the bodywork on all KYMCO models.  The plastic is excellent quality and it resists scratches while taking a ton of abuse.  Overall look of the UXV 500i is uncluttered inside and out, and rather than a full safety net protective system, KYMCO gave the UXV “half nets” which help keep you inside the vehicle, especially your feet and legs.  True to its utilitarian side, at the rear is a large, handy dump box ready to carry 420 pounds, while down below is a 2” receiver hitch.  Thankfully, KYMCO also gave the UXV an enormous storage box under the front hood for an extra jacket, tools, or practically anything else you want to carry. 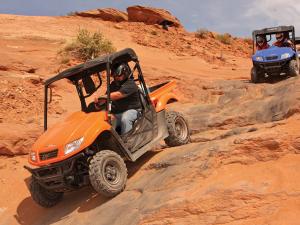 Inside the rider area, control layout on the UXV is pretty basic with a few switches on the dash and a nice center mounted digital display with a fuel gauge, speedometer, odometer, trip meter, high beam indicator, neutral/reverse light, and a high temperature warning light.  It has what you need, but it would be nice to find a tilting steering wheel.  Fortunately, there is an open spot under the dash, and even a locking glove box which easily carries a few bottles of water, gloves, maps, etc.

Since the engine on the UXV is center mounted between the two seats, a bench seat is not an option, but two comfy, well-positioned and well-shaped seats hold the occupants in place.  For long trail rides, a high back bucket style seat would be a great addition on future models.  Both the driver and passenger are kept securely in place with a locking, three point lap and shoulder belt system.  With our lap belt fastened and the engine purring quietly at idle, it was time to see what the UXV 500i could do on the Moab trails. 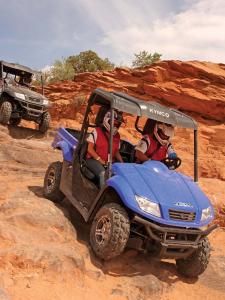 Our caravan of intrepid would-be rock crawlers headed out onto the trails, ready to challenge Moab’s toughest.  What began on the banks of the Colorado River quickly turned into a climb up the canyon walls on a winding, rocky trail where any mistake could be a disaster of the permanent variety.  Everyone was carefully picking their line.  Despite costing less than half of some of the high-dollar machines, the UXV 500i was doing a great job and it seemed right at home, as sure footed as a mountain goat.  Most of the time, we were driving the UXV in Low gear for both the added torque and the controllability over extreme terrain, but in the whoops and in faster sections, we slipped it into High.  Not once did it feel down on power regardless of which gear we were in, and transmission backshifting was also spot on; a stab at the throttle delivered instant throttle response both thanks to the CVT and EFI.  Since the engine is under the console between the seats, you do hear it purring away, but there isn't a lot of extra, annoying drive train noise.  From either the driver or passenger seat, there is ample room and the seat belts do a good job of holding you securely in place; although it would be great if the upper shoulder mount were adjustable.  At times it would ride up onto our neck and that can be a little annoying.  While they’re at it, the head rests need to be at least two inches further back.  They’re actually slightly forward of the upper seat back, and more than once we bounced our helmets off of the thick, rubber pad.  Both are easy changes to make and would improve rider comfort.  As expected, the further we ventured into the back country, the trail got even more rugged, with rock staircase climbs and descents, and crevices that would all give one’s relatives cause to worry. 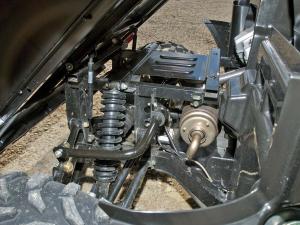 Faster sections of the trail gave us an opportunity to test the suspension, and in the whoops the shocks did a good job of soaking up the bumps.  Big hits didn’t seem to be a problem, but in extended sections, the rebound abilities of the shocks would eventually be overwhelmed by the endless, choppy bumps.  Overall, the chassis responded well to our aggressive driving with no noticeable flex or any annoying chassis noise.  It never felt tippy or unstable even when crossing rock ledges or at extreme angles, which really helps inspire confidence for both the driver and passenger.  The brakes always did an excellent job of bringing everything to a quick stop and, much to our relief, they never faded even on steep descents.  At MOAB if you’ve got a brake problem, you’ve got real issues - as many YouTube videos will demonstrate.  We even inadvertently gave them a high speed stop test.  When cruising back to the staging area, rather than watching the trail ahead, we found ourselves watching deer heading for the river banks and when we looked forward again, the driver in front of us had stopped.  DOAH!  It was one of those instant pucker moments, and with a heavy foot rammed on the brake, the UXV 500i screeched to a quick stop.  Thankfully, it held its line perfectly with no pull to either side.  That was too close!  We had become comfortable and complacent in the KYMCO UXV and it nearly cost us. 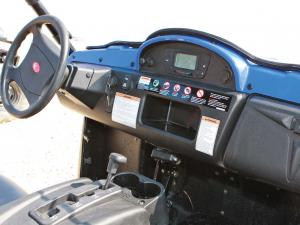 Crossing terrain as tough as that around Moab is usually a riding adventure interrupted by intermittent problem fixing.  Not this time!  In three days, we didn’t have so much as a bent rim or cut tire on our UXV 500i, and even the drivers of the high dollar machines were duly impressed!  The KYMCO UXV 500i offers a lot of value for the money with features most riders look for such as 4wd with a differential lock, plenty of storage, a dump box and 2 inch receiver hitch, a winch mount already built into the chassis, great torque, and a reliable motor.  After our Moab adventure though, the UXV500i can add one more attribute to the list: it’s tough!  Durability and reliability are huge for any owner, and both in the woods back East and in the tough rocks and canyons of the West, the KYMCO XUV500i has proven it can take a beating.  It’s the real deal.