The Sportiest Gator Yet!
Written By:
John Arens 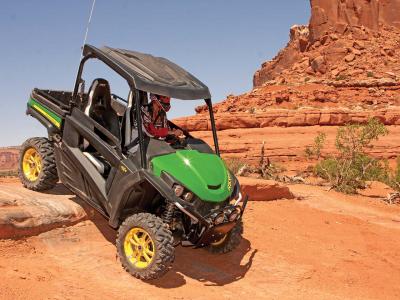 The Gator species has evolved.  What began as the humble, hard-working AMT (All Materials Transport) back in 1987 has now become a very capable off-road performer.  John Deere has sold over 500,000 of their Gator utility vehicles, but never has there been one as quick, nimble, powerful, or just plain fun as the new RSX 850i, and now there are three!  These Gators are meant for much more than the farm!

Entering into the sport market would not be easy or quick for Deere, and it would require an all-new machine from the ground up.  About the only feature the new Gator 850i’s have in common with Gators of the past is the color.

Suspension and chassis design are everything to a sport machine, and Deere introduced the Gator 850i chassis not on the new 850’s, but on the XUV550 a short while ago.  This solved two problems: the 550 would allow Deere to get the new chassis into production and in the hands of consumers, and it would increase manufacturing efficiency.  Both machines share a nearly identical frame, and the main structure is a beefy, strong, tubular steel design.  The minor differences in final dimensions are due to suspension components.

The new Gator suspension features dual A-arms at each end, and it’s almost certainly the strongest in the sport.  All A-arms are either forged or cast aluminum, and they look strong enough for a tractor.  The rear suspension does have a very unique axle and spindle design, however.  Rather than a simple upright with an axle protruding out, the upright on the Deere 850i’s looks very much like a front steering knuckle.  In fact, it even has the ball joints top and bottom, but the toe-in is fixed thanks to an adjustable tie-rod.  This does hint at a possible future crab-steer, or as GM coined with their trucks a few years ago, “Quadrasteer.”  It’s an interesting concept, and it might be just the ticket for extreme mud or rock crawling.  It will have to be precisely controlled, however, or it could make the vehicle handling a little twitchy at higher speeds.  We’ll see if Deere comes through with something very unique in the future.  Ground clearance is listed at 10.3 inches with 9 inches of wheel travel at both ends, and disc brakes are tucked inside each wheel.

All models of the new Gator 850i are highly customizable, and Deere has plenty of options ready to go as well.  No doubt the aftermarket won’t be far behind.  There are three different configurations right from the factory already though, and the differences are generally based on option packages.  All three share a common platform, body, and engine, but the base model comes with steel wheels and ANCLA tires.  For trail riders who spend their time prowling around the woods, the TRAIL model comes with alloy wheels, Maxxis Bighorn tires, a winch, front brush guard, a two inch front receiver hitch, a rear bumper, cargo box rails, and sport seats.  The SPORT model is designed for all-out desert or dune fun and comes with sport seats, cast alloy wheels with Maxxis Bighorn tires, a pre-runner style bumper, cargo box rails, a great looking sport steering wheel, and highly adjustable FOX 2.0 shocks.   Here is how the packages stack up. 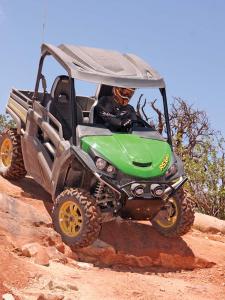 Gator RSX 850i Base Model

The new Gator RSX 850i is powered by a liquid cooled, 837cc, 4-stroke, V-twin engine mated to a closed loop Electronic Fuel Injection system.  The Piaggio engine churns out a claimed 62 hp  (59.5 ft-lb torque) with 53 mph listed as top speed, and that puts the RSX right on par with other models in the class.  As with all UTVs, the RSX gets up to speed with a CVT style transmission, and the shifter is between the seats. 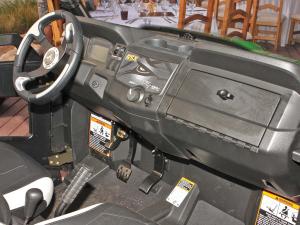 Maintenance is a huge concern for us, and the oil filter is readily accessible on the right side of the engine, although you’ll want to make oil changes while the engine is relatively cool since the exhaust is not far from the filter.  On the opposite side of the engine are a handy dip stick and oil reservoir, and both can easily be found under the rear dump box.  For even better access, we removed the box by pulling two pins!  The air intake for both the engine and the CVT is located high in the chassis, and the round, cartridge style filter is inside a housing that looks very much like a gun scabbard behind the seats.  It’s easy to get to and it will definitely stay dry!

The new Gator 850i is by far the best looking Gator yet, and we love how the body lines swoop from front to back with integrated doors and rounded corners on all surfaces.  In our opinion it’s the best looking model in the class!  The overall look is sporty, tough, and ready for action at any speed.  We also appreciate how Deere has changed to more pliable plastic bodywork and the new bodywork is designed to stay great looking for a very long time.  From any angle, the Gator looks outstanding, but we really like the recessed areas around the headlights, and the open air intake vents in the front hood.  The hood scoop is more than just ornamental, however, and the RSX 850i features a large front radiator and the hood opening provides extra airflow.  Under the front hood is a large storage bin with a rubber seal around the top, and it will be a welcome feature when it comes time to carry a ton of hunting gear or tools into the woods.  Deere didn’t stop with just the exterior panels, though, and inside the crew compartment are two large bucket seats.  Again the styling, instrumentation, and driver and passenger accoutrements are outstanding.  On the dash are the light switch, the key, the 2wd / 4wd / Diff lock knob, and a dry, secure glove box; yet the best feature on the dash is the digital instrument cluster. 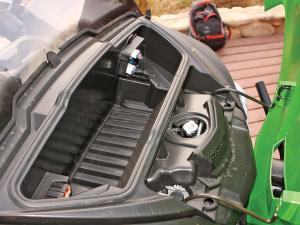 The digital instrument readout on the RSX 850i is found right in front of the driver and is easily read through the very stylish steering wheel.  We love this readout – it’s clear, easy to understand, and easy to read while underway.  It’s the best in the business!  The display shows speed, engine temp, hours, fuel level, a clock, and just about anything else you need to know.  If things really go badly, there are a couple warning lights as well.  Two things we don’t understand, however, are why there is no tilt wheel, and why gear position is not shown on the digital display.  In fact, you can see the gear readout in the digital display, but for some reason Deere didn’t activate the feature in the RSX 850i programming.  As a company we’ve seen Deere do this before with both construction and Ag. equipment, but from a customer’s standpoint, it’s a little aggravating that the feature is there, but the programming was left out.

We REALLY like the seats on the RSX 850i.  They’re extremely comfortable and if we had a choice, we’d ditch our lazy boy and put them in our living room in front of the big screen.  Overall, Deere did an outstanding job with the styling and cab area on the RSX 850i.  The cab features are well thought out, the doors keep you feeling safe and secure, and it’s very comfortable. 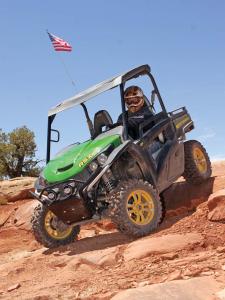 It’s always a thrill to try any all-new machine and as great as the new Gator RSX850i looked, we couldn’t wait to get one on the trail.  After a brief intro, we hopped into our seat, clipped our seat belt, and fired it up.  We snicked the shift lever between the seats in Hi and headed out into the desert.

Deere engineers promised the new RSX850i was quick to build speed and they weren’t kidding.  The Maxxis tires easily find traction just about anywhere (even in snow) and we quickly but smoothly built speed.  Throttle response was excellent and the V-twin hummed along while it delivered an exhaust note that let you know it’s all business.  Steering was slightly heavier than many of the power steering equipped machines these days, but we actually prefer the positive feel of the terrain through the wheel, and the sport steering wheel looks cool!  Unless you plan on installing a plow on the front, we wouldn’t bother with power steering on this machine.  Throttle angle was good at any part of the RPM range and the response was very linear.  It’s obvious Deere designed the clutching with an emphasis for bottom end response, though, and clutch response tapers off as you approach full throttle.

As we charged into the whoops, the FOX 2.0 shocks did a good job of controlling the ride and the RSX held its line with no swapping regardless of how hard we pushed it.  Thankfully, the shocks are highly adjustable and we think with a little more time we can dial them in even better!  The ultra-comfortable seats helped keep the ride plush as well.  As the trail climbed higher through the rocks and along ledges where any miscue meant a breathtaking plunge to the ‘nether world, we were immensely thankful for the stability built into the RSX 850i.  Descents were another matter, however. 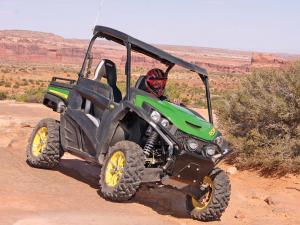 Thankfully, the RSX holds its line extremely well regardless of where you point it, but when it comes time to stop quickly, the brakes feel mushy and deliver little response.  The first time it simply scares the bejesus out of you as you hurtle towards the edge, but after that, you get used to steering your way out of trouble.  That brings us to a second point of concern.  Since the RSX 850i was designed as a performance machine, we feel it would benefit from a more aggressive, quicker steering ratio, especially for maneuvering in tight quarters or when you need to steer instantly.  We understand the slower response aids in stability, but this isn’t Grandpa’s Gator.  As for the brakes, a closer inspection revealed a much smaller than expected rotor, even by ATV standards.  A much larger rotor and more aggressive calipers and master cylinder would surely help, especially when towing a load, unless you happen to be towing a boat where you can toss out the anchor.

Overall we enjoyed our time getting to know the Gator, but like any new machine, there is a lot to learn.  There were a few adjustments we made to eliminate a rattle or two, and we love the stability and security from the doors.  It feels safe and it never let us down in the desert regardless of whether we were rock climbing or flying across the whoops.  We like it!

If you’re only familiar with the hard working Gators of the past, you’ve got a lot to discover with the all-new John Deere Gator RSX850i.  They’ve evolved and are a world apart from any previous Gator design.  Although they’ve got the heavy duty dump box, hitches, and working capabilities to handle just about any work around the farm or yard, they’re designed to carry you and your gear on just about any adventure you can imagine.  They’re also carrying Deere much further into the sport segment than they’ve ever been before, and we can’t wait to get one on our trails to study this new Gator even more.