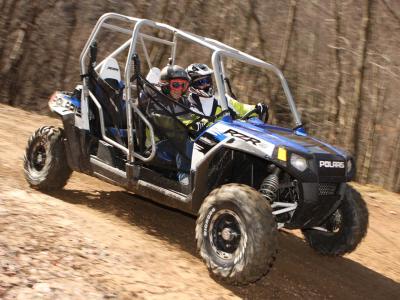 Most manufacturers have nightmares about extra unaccounted passengers on any vehicle they build. For years, the rule of thumb with ATVs was "one seat and one set of pegs equals one rider only." A trip to almost any riding area more than illustrated the real world practice of people riding double, however, and although we ALWAYS follow proper safety practices and do everything we can to encourage others to do so as well, we could see the point of riding double in some cases. It was only natural to take your significant other along for an enjoyable day of exploration. While the traditional Japanese OEMS looked the other way, the North American ATV manufacturers recognized fighting the tide was futile, and if people were going to ride double, they may as well give them a proper vehicle on which to do it. The result is, today there are many excellent two-up ATVs. Then the high performance Side x Sides came along, and a new reality began to take shape.

The extra seat in every side by side quickly found passengers ready to fill it, and for the same reason ATVs did. It was fun to explore with others! Often times that still left a buddy, a girlfriend, or family members behind, but to the dirt loving public, these vehicles had an even better solution than ATVs. They had an enormous rear dump box that could not only hold a couple extra passengers, but the cooler and camping gear as well! Once again the OEM nightmares began. With no secured seating, handholds, roll over protection, or seat restraints, passengers simply piled in and held on to whatever they could find. Before long, enterprising aftermarket companies began offering accessory seats, and some extra roll bars, but it was still a vehicle not designed for it. It was only a matter of time before an intrepid manufacturer filled the void. 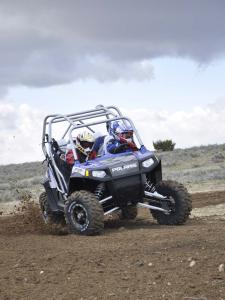 Polaris has a knack for finding a hole in the market and building a model to fill it, and the all new RZR 4 is designed to do exactly that and more. The sporty RZR 4 not only meets the need for a multiple rider UTV, but it practically slams the door closed on any other OEM even considering offering a similar unit. It will take a spectacular machine even to compete! The RZR 4 is that good!

We usually start any review of a new model with all the details, but not this time! One look at the new RZR 4 will clue riders in that this vehicle is designed for a whole lot more than hauling garden tools around the yard. The RZR 4 commands all nearby to pile in and go for a ride, which is exactly what we did.

It didn't take long to get comfortable in the deep bucket seats, and we like the rear head rest, which rides well up behind one’s helmet. (Yes we wear a helmet in a UTV!) The front seat and passenger area are much like the two seat RZR or RZRS, with all the controls in an identical position, as well as the passenger’s hand hold. We were concerned about rear seating position, but Polaris made sure that even full-sized adults passing the 6 foot mark can pile into the rear and strap in. Rear seating is elevated as compared to the front, giving the passengers a view of the terrain ahead. Identical bucket seats and restraints are used in back, but the passengers grab onto a cross bar instead. 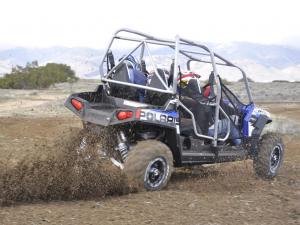 Once underway the RZR 4 handles extremely well, and this is where the machine really shines. We were concerned that the extra length would make it feel like a school bus and push in the corners, but it feels more stable in the turns than its shorter, narrower cousin, the RZR. The new RZR 4 steers easily and is completely smooth and predictable in turns, with no hint of being tippy or exceeding its moment of inertia that would make it want to two-wheel. It was very confidence inspiring. So far so good!

Absolutely the best we've tried. The RZR 4 can literally drive through the whoops, ditches, washouts, and any other obstacles with ease. The suspension soaks up everything on the trail and offers a Cadillac-like ride, and we should have expected this from a UTV with Robby Gordon's name on the side. After all, he's made a living racing across the roughest terrain imaginable, and he certainly knows a properly setup suspension is far more important than tons of power. There's no doubt he relayed this tidbit to the Polaris engineering staff as well during development. 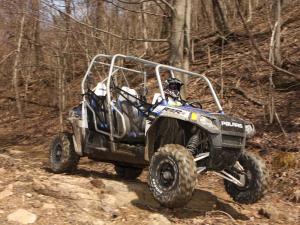 The suspension on the RZR 4 is very similar on both ends, with dual A-arms found at both the front and back; however, the rear end features the Polaris "rolled suspension" design. What they really mean is the lower frame rails have been tipped up slightly so that the suspension climbs over obstacles rather than slamming into them. Think of how the lower frame rails on most sport quads tip up slightly and you'll get the idea. Curiously, FOX Podium X® 2.0 Racing Shocks with Piggyback Reservoirs are used at both ends, and they give 12 inches of wheel travel at each end also. We do believe rear valving to be stiffer for the added engine load, however.

Polaris gives the RZR 4 the High Output, 800cc, twin cylinder, liquid cooled, 4 stroke engine, and top speed is a little over 61mph. EFI insures the engine starts easily regardless of temperature or elevation, and it has been our experience that the 800 engine is reliable, runs crisp, and provides plenty of power. Like we said, that has been our experience. On almost every surface, the engine has no trouble providing a ton of thrills for both driver and passenger alike, whether fully loaded with 4 passengers, or with only a couple. Nevertheless, the only time we thought the motor could use a little extra power was when fully loaded with 4 occupants in loose sand. To be fair, whether an ATV, Side x Side, or dirt bike, almost every engine needs a little extra grunt in the sand, and the RZR 4 is no different. Then again, snow made no difference, and it would fling powder with ease! We need to tell you everything, though, and when landing from jumps we sometimes would get a slight hesitation or hiccup from the engine, almost certainly from a momentary disturbance in fuel delivery. However, we could only make this happen when landing from big jumps. Overall, we feel the RZR 4 has very good power with a nice, perky power band that provides an exciting ride. 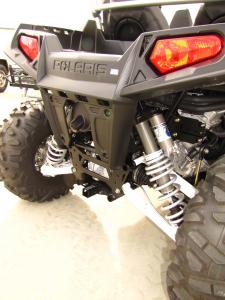 There is a lot to like about the Polaris RZR 4. Visually it is one of the most appealing vehicles we've ever seen, almost as nice as the Ducati 900 race bike we've always wanted in our living room as a piece of art. Inside the driver’s compartment, controls are well thought out, and there are even cup holders in front and back.

On the trail, the RZR 4 is extremely stable, the brakes offer good feel and strong stopping power, and low gear and 4wd allows you to climb most steep grades with no problem. Then again, the RZR 4 is not exactly intro quad cheap, and knocking on $15K it better be pretty good to start with. We also really like the cast aluminum wheels and 26" Maxxis Bighorn tires, which seemed to work as well in snow as they did in dirt! As for any working capabilities, it is equipped with a receiver hitch and a rear cargo rack, but the RZR 4 isn't likely to spend much time down on the farm. 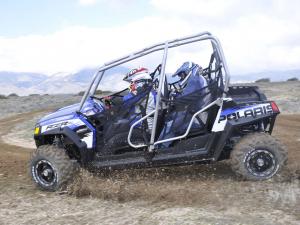 We tried the new Polaris RZR 4 in the sand, in the snow, in the dessert, and on the trails. Regardless of the driver, the universal description of the RZR 4 is "AWESOME". It delivers on its promise of razor sharp performance and handling, and our riders on opposite ends of the country gave almost identical accounts and very similar descriptions, despite the vastly different terrain. From the looks to the handling, everybody LOVES the RZR 4, and the consensus is, the RZR-4 just might be the best performance Side x Side ever!

Note: Special thanks to Bill Abshier, the GM for Valley Cycle & Motorsports of Bakersfield, CA, and to Donna Beadle at Polaris for getting us a machine on short notice. Also, thanks to our intrepid test riders Brent Reinhardt, Roger Hensley, Donnie Barnett, and Justin.