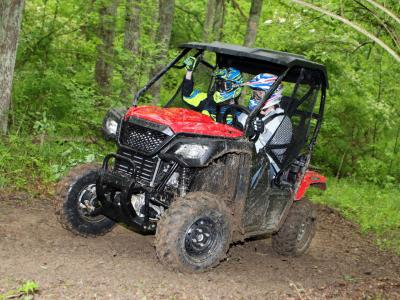 Less than a year ago at the introduction of their innovative Pioneer 700 and 700-4 Side x Side, Honda promised they were on the gas and there would be several more models to come.  For a company that protects their secrets as if they are grandmothers jewels it was a stunning statement that definitely grabbed our attention.  Today Honda delivered on the first part of that promise with the release of a second new Side x Side, the 2015 Pioneer 500, and it’s every bit as unique as the first.  The new Pioneer 500 isn’t meant to be a true sport machine, or strictly a working mule, but it’s designed to meet the needs of the majority of Side x Side buyers in a trail legal, budget minded package.  It’s not going to outrun the other two dedicated trail machines – the Arctic Cat Wildcat Trail and the Polaris RZR 570, but it has a place in the off-road world.

Honda may have been a little late to the Side x Side game, but never underestimate their ability to play, and play well.  The design goal for the new Pioneer 500 was to be compact, versatile, and fun.  Overall size is significantly smaller than the 700, which makes the new Pioneer 500 more nimble but also easier to store, it can be hauled in the back of a full-size pickup, and it is trail legal practically everywhere.  At just over 1000 pounds, the Pioneer 500 is also much lighter than the 700. 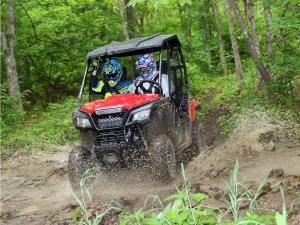 Styling for the new Pioneer 500 is similar to the 700 and we like the two structural tubes that wrap over the hood. Plastic quality is excellent and the Honda plastic has proven very durable in the past. The front hood can quickly be removed for access to the radiator and brake fluid reservoir, although we would purchase Honda's accessory bin designed for that position.  Inside the cab riders will find a comfy seat for two, adequate legroom, and a dash board featuring a center mounted digital display, the 4wd/2wd lever, the ignition key, but no glove box.  We're not sure why Honda did not include a glove box on the new Pioneer 500 but we miss it.  If it’s only a matter of molding it into the dash, why not give the customer one?  One feature we really like on the Pioneer 500 though is the doors.  The doors open fully for easy access but they are also attached to the side nets.  This alleviates any fumbling with net clips, and the doors are securely closed with automotive style double latches and a nifty, twisting release knob.  We like it!
The rear of the Pioneer 500 looks very different than any other side x side.  It almost appears that the rear end of a utility ATV has been grafted onto the crew compartment of a side-by-side. Rather than a dump box Honda gave the Pioneer 500 a sturdy, tubular steel cargo rack. The rack offers plenty of tie down points and Honda has a long list of accessories to increase its versatility.  It’s underneath the bodywork that counts most though. 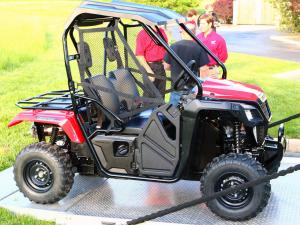 As with the Pioneer 700, the Pioneer 500 gets a steel chassis with dual A-arm suspension at both ends.  With a narrow chassis designed to be trail legal suspension travel is rather limited at 5.9 inches, but five away, preload adjustable shocks in the rear help you dial in the Pioneer 500 for your riding conditions and load.  The 500 is capable of towing a load as well and the rear features a 1.25 inch receiver hitch.  Power is provided by an engine and transmission package that originated in the Foreman ATV but was heavily modified during the development of this machine.  With an actual gearbox though, Honda had to find a way to shift gears and the result is very unique. The new Pioneer 500 is the only Side x Side equipped with a paddle shifter!  We were anxious to see what it could do.

First rides are always exciting; you never know what to expect and that was definitely the case with this machine.  Thanks to EFI it fires right up with a twist of the key and the sound is distinctively Honda-ish.  We released the parking brake next to our right calf and slipped the transmission into low by pulling the paddle shifter with our right middle finger. Finally we’ve found another use for that digit!  The digital display showed us we were in Low, and with a little throttle we were off. It doesn't take long and you'll quickly be ready to shift up into second.  Low gear is exactly that and will be good for towing heavy loads or any work duties requiring constant, slow speeds.  On the trail you'll likely be shifting into second, then third fairly quickly.  Honda had another clever method for smoothing out shifts though; with a split second cut to the ignition system and fuel delivery up shifts are fairly smooth, even under full power.  When downshifting though it's best to let rpm's drop almost to idle speed and then complete the shift to a lower gear.  Downshifts while carrying higher rpms can be somewhat jerky.  Overall though, the paddle style shifter is a lot of fun and offers a more interactive driving experience. 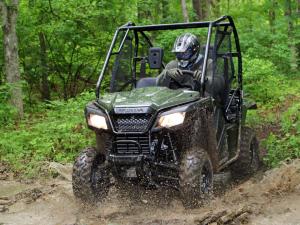 We spent an entire day piloting the new Pioneer 500 through the woods, up and down hills, and over what we would consider a good GNCC race course.  In fact, it was on legendary racer Scott Summers property.  The Pioneer 500 had no trouble maneuvering between trees and winding up and down the hills, and only rarely did we hit the upper rev limiter which cuts maximum speed to 37 mph.  Up, down, or flat, that’s as fast as you’re going to go on the Pioneer 500.  Still, it was an absolute blast playing on the 500 in the woods and it's the first time we could hear other riders giggling and laughing throughout the course. Obviously they were having a great time too.  About the only time we weren't laughing is when the seatbelt would not release and dig into our shoulder which can get annoying after it happens several times.  Throughout the day riders became more and more aggressive with the new Pioneer, oftentimes playing a game of cat and mouse. It was even possible to jump it, although with only 6 inches of wheel travel you don't want to get too crazy. We also feel it handles slightly better with two people and it’s a machine both can have fun on.

Perhaps more than any other power sports vehicles, Side x Side buyers outfit their machine with all manner of accessories, usually before they roll it off the dealers’ lot.  All of the manufacturers have recognized that trend also, and whether you are a hunter, rancher, weekend trail rider, or construction crew leader Honda has 46 accessories already available to make sure the new Pioneer 500 is ready for whatever you need it to do.  Since the Honda accessory lineup was developed with the vehicle you can be sure fit and finish is excellent as well and your dealer can order the parts for you and even install them if you prefer.  Our first accessories for the new Pioneer 500 would be a rear bumper, a roof, a windshield, and both the front under hood cargo bin, and a rear cargo box.  You can never have too much storage. 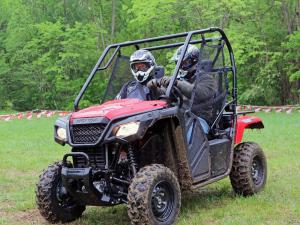 We know more than a few hi-performance enthusiasts were hoping for a big bore machine from Honda that could challenge anything else on the trail or dunes.  Would we like a hi-performance machine?  You bet, and that day is likely coming as well.  Until then we feel the new Pioneer 500 makes perfect sense in many ways.  It gets Honda a foothold in a relatively underserved segment of the market – trail legal, budget price, smaller size – and it meets the needs of a large number of buyers.  Don’t overlook the capabilities of the new Pioneer 500.  It’s easy to ride, fun, capable, and it will likely outlive you.  It’s a solid founding member of a new Honda team, with more team members to come.