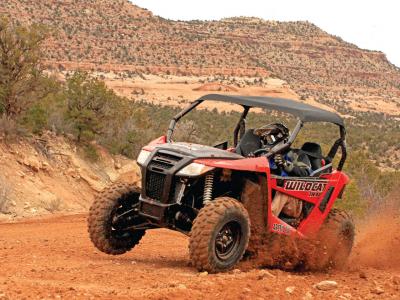 Getting right to the point -this is a really fun machine! As much as we love the open desert, we have been anxious to try Arctic Cat’s long promised, 50 inch wide trail machine because, like everyone else living east of the Mississippi, tight woods and narrow, twisty trails are the domain in which we live and ride. Finally Arctic Cat was answering the call for a value conscious, dedicated trail machine designed for our neighborhood and we couldn’t wait to try it out. Oddly enough, the wide open plains, rocky climbs, and high desert of Colorado’s western plateau would be where we would get our chance, and the new Wildcat Trail did not disappoint.

In a place that historically sees less than a foot of water for the entire year, winter snow covered the high desert trails making for spectacular scenery against the red rocks and towering canyon walls. Set against the traditional All-American background, everything appeared small, but before us two Arctic Cat semis and a lineup of new Wildcats stood ready like horses would have a century ago.

Everyone on hand liked the looks of the new Wildcat Trail. From any angle it’s sporty and the Cat styling team did a great job of designing a complete package that flows from bumper to bumper, with integrated panels and aggressive, flowing sight lines. More importantly, it’s also functional and when splashing through water crossings or in sticky mud, the fenders kept us well protected. The ultimate protection for Wildcat Trail passengers, though, is from great looking doors. Rather than a set of netting that one would expect to find as the uniform of choice for a Las Vegas showgirl, Arctic Cat gives their performance machines easy closing, secure doors and we’re happy to have them. At the rear Arctic Cat completes the styling package by wrapping the bodywork around a handy cargo deck. Any way you look at it, the new Wildcat Trail is a slightly smaller version of the long-legged Wildcat 1000 with full sized features and attitude. 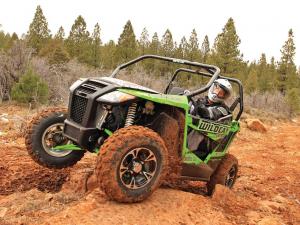 We quickly hopped into the comfy driver’s seat and swung the rear-hinged door closed. The latch clicked shut and a three point belt completed the safety package. There isn’t a lot of extra room in the Wildcat Trail, but there never will be in a 50” wide machine regardless of the manufacturer. Still, there was no shoulder rubbing with the passenger, and there was leg room for both. We also like the sturdy passenger hand hold. Tilt wheel steering is standard (nice touch!) and in the center of the dash is a beautiful digital display, along with switches for lights and 4wd, the key, and a 12v accessory outlet. A twist of the key brought the 700cc engine to life and we slipped the transmission into High and headed out.

We had expected Arctic Cat to use a variation on the smooth running 700cc engine from the Prowler in the new Wildcat Trail, but instead they started fresh and developed an all-new engine specifically designed for this machine. It takes a lot more money to design from the ground up, but the payback is maximum performance rather than a compromise by using mismatched, off the shelf parts. The new Wildcat Trail engine does have similar cylinder design specifications to Kymco’s MyRoad 700i scooter, but the two engine packages are vastly different. It’s a CAT engine all the way, although Arctic Cat almost certainly did partner with KYMCO for some components just as they have in the past, and as every other company does as well. Either way, the new engine packs a punch! 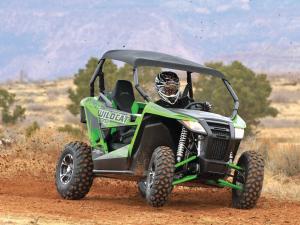 At first we were curious why CAT decided to go with a 700cc engine - seemingly smack dab in the middle between the Polaris RZR 570 and RZR 800 trail machines – but the specifications don’t tell the whole story. There is performance efficiency built into the new CAT 700 motor. By careful air intake tract, cylinder head, and exhaust design, the engine breathes freely. A high performance TEAM INDUSTRIES clutch reacts instantly to throttle input, and eliminating the rear differential further reduces weight and driveline power loss. The Wildcat Trail 700cc engine performs beyond its class. Horsepower output is claimed to be 60+ which is a full 20% more than the Polaris 800. It’s performance you can feel!

On our ride from the valley floor, up through steep canyons and across high plateaus, the Wildcat Trail engine never lacked for power. Usually we expect a little less power at high elevations, but the EFI equipped engine ran smoothly and we liked the performance both from the motor and the TEAM clutch which handled backshifts well. It seemed we were always in the powerband, with no hesitation. A couple features we always look for on any engine are the air filter, oil filter, and dip stick location, and when we found them on the new Wildcat Trail engine, we felt like buying the entire design team a beer. The large, foam filter is at the extreme back of the machine, and the cover is easily removed with no tools. Between the two seats is a small panel with the oil filter and dip stick immediately behind. About the only annoying thing with the engine was a little drive line chatter when backing off the throttle while going downhill. It’s a common noise associated with CVT transmissions in similar conditions so we didn’t worry about it the few times we noticed it. Overall, the Wildcat Trail engine is a performer! 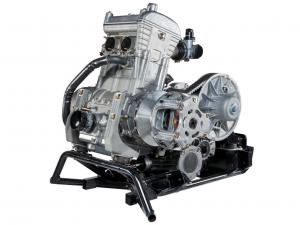 It wouldn’t be a Wildcat without serious suspension and the Wildcat Trail again offers extra value with preload adjustable, nitrogen filled FOX shocks. The shocks don’t have any external reservoir, but they are rebuildable and that makes them unique for a value conscious machine. In fact, thanks to a threaded port on the shock head, we believe it would be possible to include a remote reservoir in the future. Don’t expect a long travel, five link dragging suspension at the rear, but what you do get is dual A-arms at both ends, front and rear sway bars, disc brakes, and over 10 inches of wheel travel and ground clearance. Our favorite feature on the Wildcat Trail is the frame. Arctic Cat went with their high-strength steel, large diameter exoskeleton style tube chassis which offers incredible rigidity and durability. From an engineering perspective, we love the strength, but it just plain looks cool! As usual though, it’s performance on the trail that counts most.

The Wildcat Trail carved through the mountain trails and between rocks and obstacles easily and predictably. Most bumps in the trail were handled by the suspension with minimal feedback through the wheel or seat, and we never managed to bottom it. Stock shock performance is very good, but so is steering effort. With power steering being a common option on some larger machines, there are those who think it belongs on every machine. The Wildcat Trail doesn’t need it, even in 4wd. Steering is firm enough that you still feel connected to the ground, but light enough that if your forearms get tired, you don’t need power steering; you need a gym membership and a curl bar. In fact, we believe adding power steering to this machine would actually take away feel and be a mistake. While half of our ride was spent climbing hills, dodging rocks, skipping through whoops and generally exploring the plateau, we did get plenty of time on fast trails and fire roads as well. On wide open fire roads, it was a blast to slide into the corners, let the rear end drift out predictably, thanks to the sway bars and low center of gravity / seating position, and then exit the corner with our foot firmly on the gas. After a day of riding, we didn’t want to go back. In fact, before it was time to leave the next morning, we grabbed another Wildcat for another quick spin. It’s that much fun! 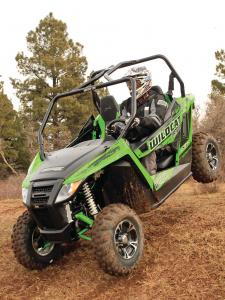 There is a lot to like about this machine, but there is one feature that is almost sure to be loved by all. With the longer suspension travel, great handling thanks to a 60/40 weight bias, better shocks, more power, comfy seats, full doors, and great looks, one has to wonder about price. Good news! The new Wildcat Trail is actually $500 LESS than the competition! The only things we wish for are more storage and a glove box door rather than a net. It may have taken Cat a little longer to bring this model to market, but thanks to Mark Esala and his excellent engineering team, the Wildcat Trail has arrived in style and ready for action.

Arctic Cat’s new Wildcat Trail is everything we hoped for and more. It’s almost like it doesn’t know it’s the junior Arctic Cat performance machine; it thinks it’s the biggest dog in the fight! The Wildcat Trail is a well-designed, highly crafted machine full of engineering ingenuity that performs beyond its price and class and offers enormous value for the money. It has style, price, and performance, and it’s a really fun ride. Is the Wildcat Trail a great machine? Only time will tell, but it’s got everything going for it.