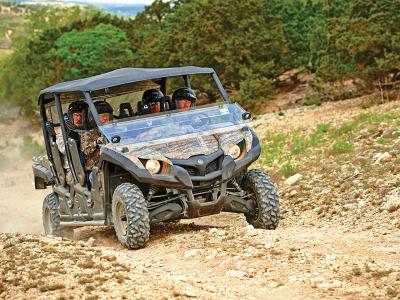 Yamaha made it very clear last year that the Viking would be the first of many models designed to carry them back into the Side x Side market. The new, six seat Viking VI is the second installment on that promise and it builds on the hard-working features of the original Viking, but with upgrades and features to make it even more capable for the entire work crew. Since Texas accounts for a large percentage of Side x Side sales, many of which are the multi-passenger “crew” type vehicles, Yamaha thought it would be fitting to preview their big Viking VI where it would be right at home.

They like everything big, beefy, and tough in Texas and you’ll be hard pressed to find any Side x Side that fits that description better than the new Yamaha Viking VI. The chassis platform is a steel tube structure much like the standard Viking, but it has been reinforced in critical areas to carry the extra load and torsion forces of the 7.5” longer wheelbase. Yamaha also came up with a clever trick to reduce your chances of getting the longer chassis stuck. Rather than having a completely flat lower surface, the outer cab frame rails have been raised about 2.5 inches, making a very shallow V-form bottom. This reduces the contact area with any trail obstacle. It wasn’t just the chassis that was beefed up or changed for the Viking VI, though; even the tires received changes, and on the side of the Maxxis Bighorn tires you will find a VI designation. 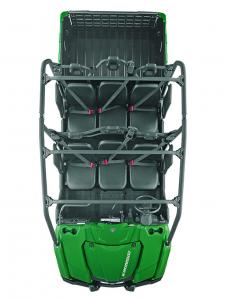 The new Viking VI shares the base 686cc, four-stroke, liquid-cooled, EFI-equipped engine with the standard Viking, but there have been several important updates. To make the engine even more capable of handling heavier loads, Yamaha shot peened the gear surfaces for better wear resistance. Shot peening is basically like sand blasting, but with little steel balls. This has the effect of both hardening the surface, and relieving stress in the grain structure of the steel. Since the engine is under the rear dump box and the air intake is under the front hood, a longer air intake was needed, but to compensate for any reduced flow a much larger, foam type filter is found under the rear center seat. We like how the new dual-foam filter is both washable, and has enormous area for excellent service life between cleanings. Fuel injection mapping was altered to match required power output, and the new Viking VI even has more cooling capacity. Keeping the oil from breaking down at high temperatures is vital, and a very clever oil cooler directly between the spin-on oil filter and the engine cases helps with that. Great idea!

Yamaha is very proud of their Ultramatic® transmission and sprag clutch. Although it appears similar to other CVT transmissions there is one big difference. Most CVT clutches rely on the belt slipping, and when the belts begin to heat up or wear, engagement can be jerky. The Yamaha Ultramatic sprag clutch insures constant belt tension, less heat buildup, and smooth engagement, all of which result in longer belt life. We’ve never had a failure with the Yamaha system. Switching between 2WD, 4WD, and 4WD fully locked front differential is easy thanks to a knob on the dash.

Bringing everything to a quick, controlled stop is every bit as important as getting it rolling, and to make sure that would not be a problem Yamaha gave the Viking VI excellent, twin piston calipers at each wheel. A thermal shim was also added to isolate heat out at the wheel rather than allowing it to transfer into the brake system. 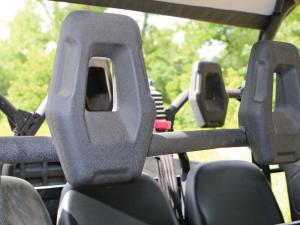 While the front section of the Viking VI is visually identical to the standard Viking, the second row of seats is definitely its distinctive feature. Rather than just stretch the frame and toss in a board with some foam strapped to it, though, the rear of the Viking VI is a fully engineered system designed for function and comfort.

Riders in the rear of the Viking VI get ample leg room, their own shoulder and lap belts, and individual bucket seats. Just like in the front, the center rider is relined ever-so-slightly back which doesn’t sound like a big deal, but in effect it avoids much of the shoulder to shoulder contact and shrugging as riders jockey for space. Somebody needs to send this idea to the airlines! The rear seating position has been raised an inch for a better view of the trail ahead, and Yamaha even carved out the front head rests so they did not block the forward view. A set of half doors keep everyone’s feet well protected inside the cab, and there is even a small, protective shoulder rest for the outside riders. A serrated floorboard helps anchor your boots, and a sturdy hand hold with a rubberized coating gives everyone in back a place to hang on. One feature we are especially fond of, though, is a protective cover. Yamaha chose to cover front passenger seat belt brackets with a protective shield. We’ve rammed various body parts into exposed brackets on other brands and it’s not a good feeling. Great job at addressing this, Yamaha!

Adding an extra row of seats presented another great opportunity to improve the Viking. We want tons of storage for everything from boots, to tow straps, and anything else we might need on the job or for a weekend in the woods. Thankfully the Viking VI has storage areas under the dash, in the dash, and under each of the front seats. There are also accessory outlets for riders front and back, and enough cup holders for a bachelor party! 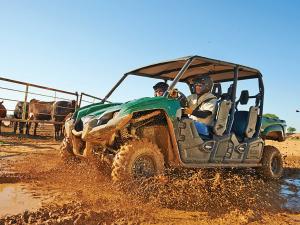 A longer chassis usually means a slightly better ride on rough terrain, but it usually comes at the expense of handling and performance in other areas. The new Viking VI is the first vehicle that defies that trait. We actually prefer this model to the standard version. While we didn’t have it long enough for extended testing, there is quite a bit we learned about its capabilities on our Texas backcountry adventure.

We liked the feel of the Viking VI. Even though the front seat and cab area is virtually identical to the standard Viking, we felt right at home. Access was very good, and we like Yamaha’s half-door and secure, yet easy-opening latch. The seats are comfortable, and even with a full load in the front, there was room for all. Controls and storage are easy to reach, and about the only thing we wish Yamaha would include would be tilt steering. Overall, though, we give it high marks.

Comfort in the back seat was also very good. Again, the doors make access easy unless you’re wearing some seriously huge boots, and once in the seat there is plenty of personal space. Just as importantly, there was good knee room, and even for riders over 6’ tall there was a couple inches to spare. We also really like the protective shoulder rest for the outside riders, and the hand hold works for all. Headrest position is right where you need it for protection, but far enough back it never pushes your helmet. There is also plenty of headroom – far more than your truck! 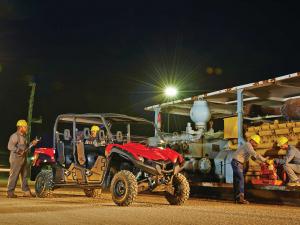 Performance from the Viking VI engine is good, but more importantly it is much quieter in the front. It’s possible to carry on a conversation without sounding like you’re about to come to blows! The motor hums along and steadily gets up to speed with a nice torque curve thanks to EFI. Unfortunately, the chassis still shows significant vibration thanks to a single cylinder engine. Overall though, the engine is well matched to the chassis, even with a full load of hefty hunters.

We really like the shifting on the Viking VI. It goes into gear smoothly and it never feels notchy. Performance from the Ultramatic transmission is also very good, and there was no abrupt shifting or lag when backing off, then getting back on the throttle. Yamaha did an outstanding job with the transmission.

A longer machine is usually a handful, but not this one. For turning around in the trail, you had better plan on three point turns, but for everything else it was easy to wind between the scrub brush on the Viking VI, even with one hand on the wheel. Feedback through the wheel was excellent and gave a good feel for the terrain. The steering ratio is also very good, and it’s even available with Yamaha’s Electronic Power Steering. Even when driving aggressively, it never gave a hint of being tippy or unstable. 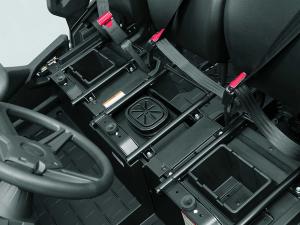 One feature we noted on the Viking VI is that it gets better with a full load. This is due to a shock setting that must accommodate a full crew aboard plus a full 600 lbs in the steel cargo bed. We actually really like the suspension and handling on this unit, although we still wish Yamaha would give us the ability to make at least some adjustment to the shocks. Braking action was also excellent, just as it was on the standard Viking.

We like the Yamaha Viking VI. It’s stable, confidence-inspiring, capable, and one of those rare cases where the larger, heavier machine feels better. If you’ve got a full crew to haul to the work site, or even just to deer camp, the Viking VI is an excellent choice. The big Viking VI may be right at home in Texas, but it’s ready to conquer terrain anywhere.

HIGHLIGHTS of the 2015 YAMAHA VIKING VI 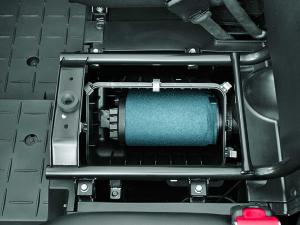