A first Look at the New Honda
Written By:
John Arens 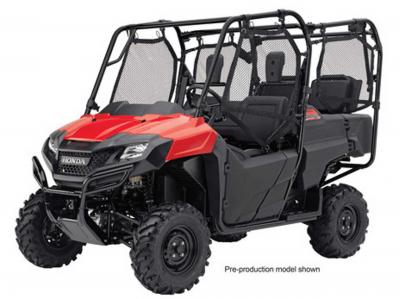 The details are still a little sketchy but one thing is clear; Honda intends to take a big swipe at Polaris, Arctic Cat, Can-Am, and Kawasaki with the newest and most advanced Side x Side they’ve ever built, the all-new Pioneer 700-4.  The new Pioneer is meant for more than life on the prairie, and one look shows that Honda is serious about Side x Sides.  It’s been a long time coming, but the Pioneer 700-4 looks to break new ground for Honda and make tracks where they’ve never been before.

Long before there was an Odyssey mini-van Honda released their first Odyssey, the FL250 back in 1977.  More of a buggy or off-road kart, the Odyssey FL 250 was neither a motorcycle nor an ATV, but it did allow thousands to experience the joys of off-roading for the first time and it was almost two decades ahead of anything else.  Odyssey development peaked with the introduction of the 1989 Pilot (another name used by the automotive division).  The Pilot was a single seat, 400cc machine and it still commands top dollar when you can find one for sale, but production ceased after 1990 much to the dismay of Pilot enthusiasts.  The Big Red MUV brought Honda into the Side x Side world but there were several other competitors already selling boat loads of Ranger, Rhino’s, and Prowlers, and the Big Red generated and received all the excitement of a library book fair on the day the circus was in town.  The Big Red is a capable machine on the farm, construction site, or trail, but it lacked features that are standard on other models, and let’s face it, it just doesn’t present the tough, hard working and hard playing sporting image other machines do.  The new Pioneer 700-4 is designed to change that. 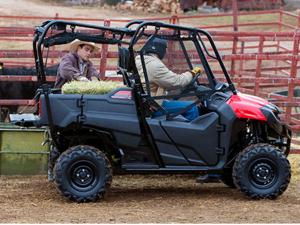 Honda protects their secrets as well and anybody but there is quite a bit we can glean about the new Pioneer 700-4 just by looking at the photos and glancing through the specifications.

Styling:   Honda scrapped the rounded, bulbous look of the Big Red MUV in favor of a much more edgy, muscular styling on the new Pioneer 700-4. It looks tough and ready for action!  There also appears to be a large storage bin under the front hood which can be removed with two quarter turn fasteners, not unlike some Polaris models.  The Big Red needed more storage; the PIONEER delivers.  We also like the swept lines that flow from front panels, through the doors, and continue through the rear box.  It gives a nice, uniform look to the entire bodywork and we know the Honda plastic will hold up.  We praised Deere for this approach to styling on their Gator RSX, and Honda was apparently working on the same “whole package” styling principal at the same time.  Nice job!  At the front they gave the Pioneer real protection with a serious, dual tubing steel bumper. 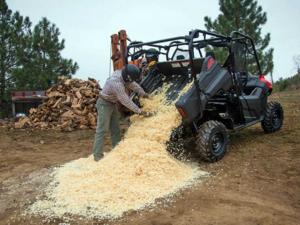 Chassis:   The Pioneer 700-4 uses a new, slightly longer chassis than the Big Red, but Honda clearly wanted to improve the ride and suspension capability as well.  Longer A-arms are used at both ends, and suspension wheel travel and ground clearance is increased.  New tires and wheels are found at both ends as well.  We also believe the suspension will feature five-way, preload adjustable shocks, especially at the rear which must accommodate widely varying loads.   Honda did include a 2” receiver hitch at the rear, and towing capacity is listed at 1500 pounds.

Engine:   Honda has equipped the Rincon ATV and the Bid Red MUV with a super reliable, fuel injected, 675cc 4-stroke engine, and the Pioneer will share that engine platform as well, although it will be updated for the loads and performance characteristics of the Pioneer.  A large capacity radiator is tucked up under the front hood for protection.  Mated to the engine will be Hondas unique, three speed automatic transmission.  Rather than CVT belts, the Pioneer transmission operates with fluid and gears, and by filtering the engine oil multiple times no other fluids are needed.  An added benefit on the trail is consistent engine braking.  Gear selection is Forward, Neutral, or Reverse.

Interior:   Bench seating is used in the front cab area of the Pioneer with three point seat belts for two.  We like the new, higher dash, and to the left of the steering wheel is the parking brake lever.  This makes it extremely handy when hopping in or out.  The shift lever will also be located on the dash, but one thing we’re really happy to see is the Pioneer appears to come with a glove box cover as a standard feature and not as an accessory it was on the Big Red.  Side nets are designed to keep everything inside the vehicle, but Honda also makes it possible to roll them out of the way. 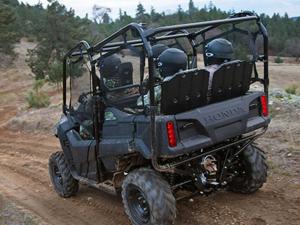 The Pioneer 700-4 has one other unique feature no other Side x Side can claim; It’s a transformer!  Thanks to a clever bed design and a slightly longer chassis, the Pioneer can be quickly converted to a four-seat fun machine capable of a day on the trails or hauling your crew to the hunting camp.  The two extra seats fold out of the rear bed with no extra tools, and we like the high back seats.  Three point belts keep you securely in place.   Each seat folds out individually, but when not hauling your buddies the tough, composite bed can handle anything from cinder blocks to bales.

Whether hauling hay bales or your buddies back sides the Pioneer 700-4 brings Honda into the world of modern Side x Sides.  It’s a great looking vehicle with some very unique features and we can’t wait for our first ride.