The Raptor 700 Gets a Round of Updates and a New Home
Written By:
John Arens 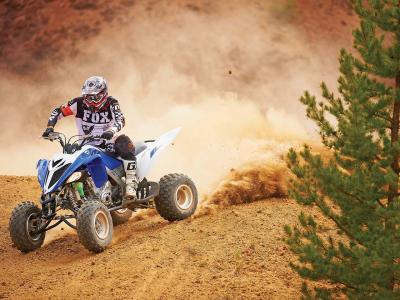 A little over a year ago Yamaha moved all production of the Grizzly ATV lineup to their Newnan, Georgia manufacturing facility.  It was a huge statement about the plant’s quality and production capacity, and it got the finished product closer to the end customer.  Now Yamaha is bringing production of their most popular sport ATV, the Raptor 700, to Georgia also, and while they’re at it they’re giving the Raptor a fresh look with a round of upgrades.

The Raptor 700 has reigned as king of the sand for most of a decade.  In that time other big bore sport ATV’s have been introduced but nothing has come close to challenging the blue bike in overall performance.  For experienced riders we believe the Raptor 700R to be the best ATV ever built for the dunes, desert, or for play riding in much of the country.  It’s a favorite among riders and a sales leader.  There are several reasons the Raptor appeals to so many; it looks great, it’s comfortable, and it’s got so much power nothing else can touch it.

A 686cc, liquid-cooled, SOHC 4-stroke engine fed by Electronic Fuel Injection drives the Raptor 700 and it’s been our experience it is extremely reliable.  While the engine carries a little extra weight and could probably be put on a diet it revs out quickly and smoothly thanks to dual, counter rotating, counter-balancers.  It’s got gobs of power everywhere in the powerband and refuses to stall.  We’ve even idled it across the pit area in 5th gear and the engine keeps chugging along.  One tester summed it up as; “the EFI doesn’t give it a real “hit”, but it’s got an insane amount of torque.”  Stab the throttle at any time and you can expect the back end to try and pass the front.  On the track or trail the transmission shifts very well, and the Raptor 700 even comes with reverse which is a big concern for casual trail riders. 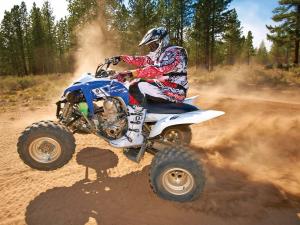 We’ve always liked the looks of the Raptor 700.  It’s bold, sporty, muscular, and seemingly ready for action, but Yamaha chose to incorporate changes in the 2013 Raptor 700 and we think it’s a good move.  The most obvious change most riders will notice is the new, vented front nose piece but there are other differences in styling as well.

In the saddle everything feels perfectly placed on the Raptor 700.  The narrow tank is perfect for sport riding, the seat offers an aggressive position for charging ahead, and it’s comfortable for all day trail rides.  Handlebars are exactly where they should be, and there is plenty of room between the seat and the pegs.  Our only complaint in the past is we would sometimes hit our knees on the front fenders but those days are gone.  For 2013 Yamaha moved the front fenders forward 50mm (about 2 inches) and the result is more leg room.  Just ahead of the steering column is the second change, and gone is the digital display.  To be honest we won’t miss it.  Nobody looks down while riding a high-performance sport machine anyway, and if they do they probably shouldn’t.  Instead of the digital display you’ll now find a lighted panel showing gear selection and a few warning lights.  It’s all you need.  Mounted on the right fender is a reverse knob. 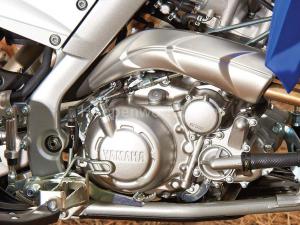 Yamaha broke new ground when they introduced the hybrid Raptor 700 chassis years ago.  Rather than a traditional tube chassis Yamaha gave the Raptor a hybrid frame utilizing both traditional round steel tubing where strength and flex was needed, and major cast aluminum components in other areas for light weight.  It’s been our experience the hybrid chassis holds up very well.  Just like the YFZ450R, the sub frame of the Raptor 700 is cast as well, and one thing we really like is how the bodywork fills in the void below the easy access air box above the swing arm for a very clean look. This cast aluminum swing arm also gets an eccentric-style carrier for easier chain adjustment, a familiar linkage, and for 2013 a twin piston brake from the YFZ450R.  The advantage of the new brake is better feel and stopping power along with manufacturing efficiency.  Front suspension on the Raptor 700 relies on traditional dual A-arms with 9.1 inches of wheel travel, and it is here that major differences between the different Raptor models can be found. 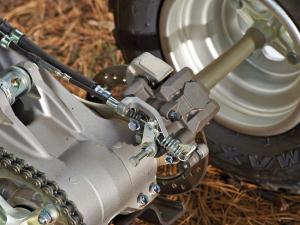 The base model Raptor 700 gets front shocks that are preload adjustable only while the upgrade 700R gets shocks that offer a piggyback reservoir with High and Low speed compression adjustment, adjustable rebound, and threaded preload adjustment.  At the rear of the 700R is a shock with adjustable preload, rebound, and High & Low speed compression for 10.1 inches of wheel travel.  The base model rear shock is identical to the 700R, but without compression and rebound adjustment capability.  All models of the Raptor 700 get new Maxxis tires with a stiffer sidewall for less tire flex and more predictable slides.

We haven’t had much trail time on the 2013 Raptor 700 but we’ll have one on our turf to work with soon.  We’ve always loved the past models though which were amazingly stable, confidence inspiring, had tons of torque, and were a blast to ride.  We expect those traits to continue with the 2013 models.

We’re also glad to see Yamaha expanding production with even more models at their Georgia plant.  It clearly shows that Yamaha is listening and committed to the customer, and we expect the new Raptor 700 models to create a lot more Yamaha fans in the future.  We can’t wait to get one on the trails, track, and dunes!