A LITTLE TLC for your CVT
Written By:
John Arens

Want to know what is hardest on your CVT belt? Bigger tires, grit making it’s way past your CVT cover, poorly working clutches, and high horsepower engine modifications all take their toll, but the biggest killer of your CVT belt is heat. The G-Force™ RedLine™ belt by Gates was designed to take the heat and stress caused every time you put your foot to the floor.

All CVT belts look similar, but it’s what beneath the surface that counts. At the heart of every belt is a series of cords that do the job of transmitting the engine power to the transmission and wheels. You can see the cords on the side where they meet the surface of the rubber compound they are encased in. The differences are in the details of how the fiber cords are treated, and the rubber polymers that are heat and wear resistant. It’s extremely important that the fiber cords distribute stress evenly. The job of the rubber is to grip the clutch faces and hold the cord in place. 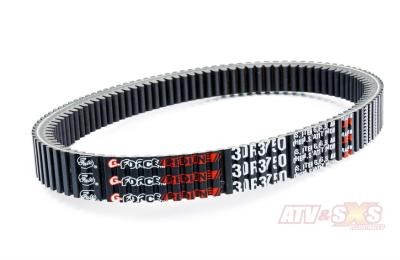 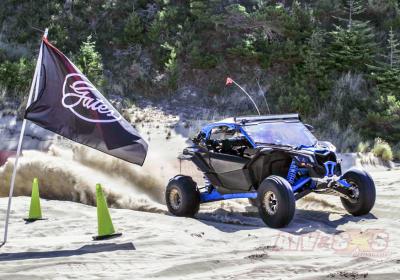 Gates uses a patented ethylene elastomer material in their new G-Force™ RedLine™ CVT belt designed to combat both heat and wear for up to a 300 percent increase in belt life. Axial stiffness is also maximized to allow the belt to run at higher continuous torque loads, such as those encountered in low-speed rock crawling and in extended sand riding. Dunes are notorious for sapping power while at the same time causing heat buildup. In addition to the performance benefits, ethylene elastomers are more environmentally friendly to manufacture and will serve as the foundation for future belt developments at Gates. Details of the new G-Force™ RedLine™ belts are:

There is no doubt one of the toughest races on the planet is the King Of Hammers, a little jaunt around the barren, rocky mountains and desert flats of California’s Johnson Valley. The 143 mile course is a mix of high speed lake beds and brutal rocky climbs. This course will make a mountain goat turn back, and just spectating here is a sketchy challenge, much less completing the course. Of the 131 UTVs that entered the 2020 KOH event, only a very lucky 33 were able to finish, with Can-Am Maverick pilot Hunter Miller taking the win. His belt of choice: the G-Force™ RedLine™ by Gates®. It wasn’t Miller’s first outing with the RedLine™ belts though. Miller was part of a select Gates testing program for the innovative G-Force RedLine belts in 2019. This allowed Miller, Kyle Chaney, Travis Skelton, Bryan Carr, Scottie Lawrence, and other top UTV racers to test the new design in the heat of competition, prior to the official product release in December. What they tested, reworked, and tested again last year is now available to every high-performance UTV owner in 2020, with the race-proven performance and reliability UTV owners need. 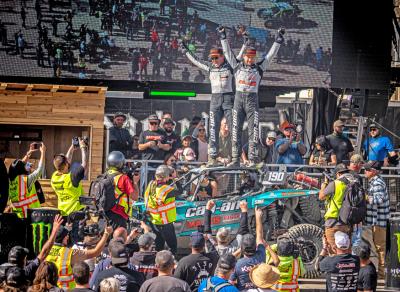 Gates G-Force™ RedLine™ CVT Belts have proven themselves off the track as well. Remember how your buddies gleefully exclaim “It’s a rental!” whenever they hop behind the wheel of a fleet car they don’t own? Now multiply that by a factor of ten for off-road vehicle rentals. It’s practically a license for controlled destruction! In the devil-may-care world of ATV & SxS rentals, the main casualties are tires, bodywork, and CVT belts.

Gates tested the G-Force™ RedLine™ belts with the rental fleets of Moab, Utah. Rock climbing is particularly stressful on belt and machine owner alike, and many rental customers make the mistake of leaving the transmission in High gear when rock crawling. BIG mistake! High gear puts the most stress on a belt and all too often it’s a sure ticket to the wafting scent of burnt rubber. Luckily, Gates engineers planned for this, and the RedLine belts have shown amazing resiliency in the face of such abuse. Fleet operators have reported a significant improvement in mileage and durability, with G-Force RedLine belts replaced after 3,000+ miles – more than twice the standard service interval – still in good condition. Sadly, there is no Gates equivalent for the mangled bodywork.

There is one other benefit to the Redline belt and that is the price. They cost far less than the standard OEM belt, with greater performance. It’s another win! 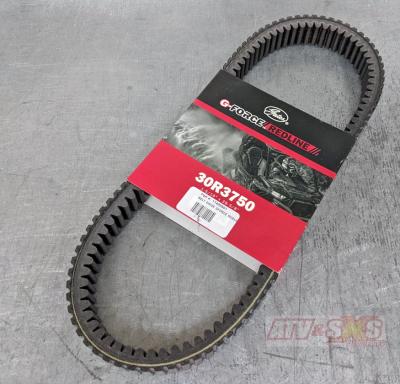