STAND and SALUTE
Written By:
By Francis Soyer 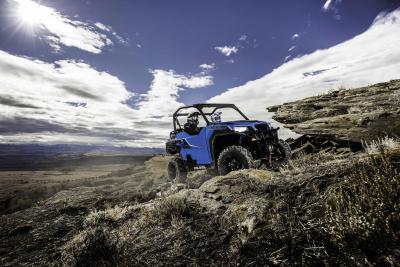 Atten-TION!  Before we can proceed any further, we gotta get somethin’ straight.  The new POL-aris General is NOT your mommas UTV.  It’s a fine, multi-purpose Side x Side meant to advance and take ground faster than anything else in its class.  It’s got a high performance motor, advanced technology, a capable chassis, and everything but a Sargent Hulka bobble head on the dash.  Welcome to the Polaris corp. 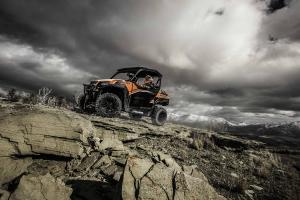 Polaris has conquered pretty much all the high ground in the off-road world with an aggressive strategy of continually putting new soldiers in the field, or in their case, new machines.  Whenever and wherever they see a hole it doesn’t take long and there is a new model to stand guard over it.  Their newest creation is called the General, and it looks to be ready to square off with Can-Am's Commander, the Honda Pioneer 700, and Yamaha’s Wolverine.

The General is based heavily on all Polaris has learned both from the Ranger and RZR platforms, and the specifications most closely resemble the RZR-S 1000.  Comparing the specs for both reveals many numbers are identical, with only a slight difference in overall size and weight.  The most obvious difference though is body styling. 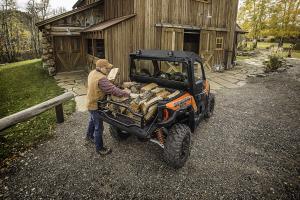 The General gets its exterior looks from the RZR lineup and we generally like the styling.  We’re happy to see Polaris is installing doors on nearly all new models, and these doors even come with arm rests on the inside.  It’s on the inside though where the real differences can be found, and it’s unlike any Polaris before it.  Welcome to the future interior of all RZR models to come!

We’ve criticized Polaris for the RZR interior which never really matched the rest of the machine for performance and looks.  Somebody at Polaris must have taken it to heart, and the new General interior is highly stylized and looks GREAT!  We really like the new cockpit layout which is much more automotive like, and finally the instrument pod is ahead of the steering wheel.  Of course a tilting steering wheel is standard, as is Electronic Power Steering.  We believe the General will also include a new four post seat mount to eliminate the annoying tendency of the RZR seats to roll in aggressive cornering.  It’s a good bet that next year’s RZR models will feature this interior package as well. 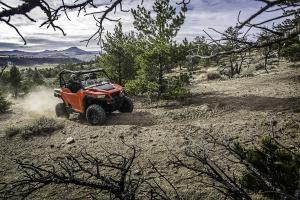 Highlights of the new General include: