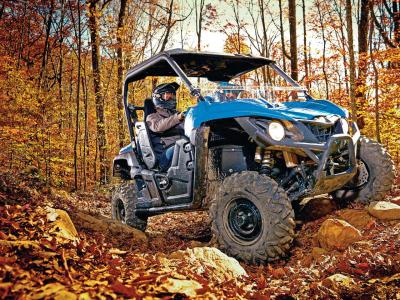 The last decade has not been kind to Wolverines, whether it was the economic downturn felt by the Wolverine State of Michigan, the four-legged forest dweller, or the cellar dwellers of Big Ten football, the Michigan Wolverines. All three were seemingly on the brink of extinction, and even the comic book character Wolverine was killed off in recent months, but there may be hope on the horizon. State business is picking up, the first Wolverine was spotted in the wilds of California in almost 100 years, and gridiron guru coach Jim Harbaugh was hired to perform the most miraculous resurrection since Jesus. The Wolverine we’re most interested in, though, came from Yamaha.

For years, Yamaha had a Wolverine ATV in their lineup, and it was known as a sporty trail explorer that combined the four wheel drive capabilities of a heavy duty utility machine with the handling traits of a much lighter, sport ATV. It was a natural in the woods. As the Yamaha ATV lineup evolved and the Grizzly ATVs became ever more capable, the Wolverine was discontinued, but today a new Yamaha Wolverine is ready to take to the trails. It’s the third installment on Yamaha’s five year, “model per year” pledge to build a presence in all segments of the Side x Side world.

The all-new 2016 Yamaha Wolverine R-Spec is ready to take up where the Wolverine ATV left off, and it’s got a lot going for it. At first glance, it offers great looks, 26” tires, HUGE shocks offering long wheel travel, a medium sized rear bed for hauling, and a spacious crew compartment. It even comes standard with a roof! It’s what’s under the skin that counts most though. 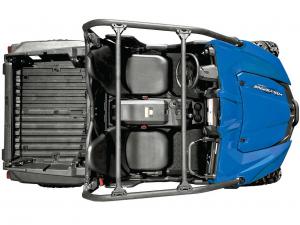 An all-new design warrants a new engine and drive system, and while there are similarities to the Viking Side x Side, the engines are not the same. The new Wolverine R-Spec gets a liquid cooled, dual overhead cam, 708cc engine fed by EFI mated to Yamaha’s incredibly reliable Ultramatic transmission. In fact, if we had to pick one word to describe the Yamaha lineup in recent memory that word would be “reliable.” While there are sport models with a little more flash and sizzle, the Yamaha’s just don’t quit and we expect the new Wolverine to be the same. Plus, body styling on the Wolverine definitely elevates the flash factor.

At first glance, the new Wolverine looks GREAT! We like the aggressive body styling of the Wolverine, but we also appreciate features such as a lower hood line for increased visibility of the trail ahead. In addition, Yamaha built in a couple clever features on the lower frame rails to protect the rear suspension. Since the new Wolverine has a fairly wide stance at over 61 inches, anybody exploring tight woods is bound to scrape a little bark now and then. Small wedge shaped brackets have been welded to the frame rails and they’ll work wonders in protecting your wheels from stumps and rocks along the trail. It’s a great idea! To protect the underside, Yamaha gave the Wolverine a steel skid plate that covers the entire bottom, and although we love the protection, we’re a little concerned about debris cleanout. Since the entire skid plate has been welded to the frame, you’ll likely have to flush any crap out with water, and there are times we prefer to drop a skid plate for thorough cleaning. A welded on skid plate isn’t a deal breaker, however, and we can live with it for the protection it provides. 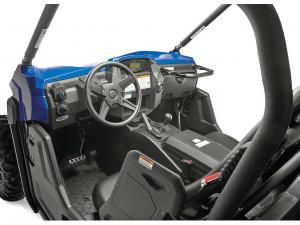 Yamaha says the Wolverine is built for recreation, and a big part of that is hunting, fishing, and camping. The first place most hunters, campers, and anybody else hauling gear looks is in the bed, and this one is different than any before it. While the Viking offers a big, steel bed, the Wolverine offers a medium sized composite bed with a clever feature. Rather than a hinged tail gate, the Wolverine tail gate slides into place but can be removed and stored neatly at the front of the box. The advantage of the composite bed is durability, reduced weight, and much less noise. Although the bed does not tilt for dumping, we like it!

A traditional dual A-arm and shock setup is used at all wheels, along with hydraulic disc brakes featuring dual piston calipers for excellent stopping. We’re especially glad to see Yamaha go with super reliable hydraulic disc brakes all the way around. After all, this Side x Side does have sport capabilities, and stopping is every bit as important as acceleration. Curiously, even though there are already 4 disc brakes on the Wolverine, Yamaha included one more on the drive shaft that works solely as the parking brake mechanism.

A big factor of handling on any machine is the tires, and for the Wolverine R-Spec, Yamaha chose Maxxis 2.0 radials designed to the requirements of this machine. The tires are designed for the sporty performance aspect of the Wolverine, but they feature a very deep and aggressive lug which hints at their climbing and mudslinging capabilities. Steel wheels are used for their durability. 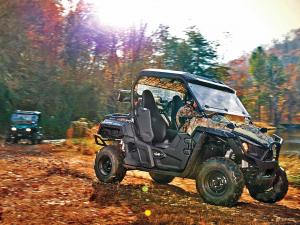 Yamaha went all out with the shock design for the new Wolverine and it’s a good bet they’re bigger and more advanced than the ones on your truck. The large diameter, extra-long shocks offer incredible adjustability with high and low speed compression, rebound, and threaded preload adjustability. This is not the shock you find on most recreational machines and far more in line with what you would find on a full sport machine. Yamaha understands the ride is everything and critical to the passenger’s experience. Yamaha also realized it’s not just about wheel travel, but also keeping the wheels in contact with the ground to help create that confident, safe ride feeling. To achieve that, the front suspension has a significant amount of droop, allowing the wheels to follow the terrain. For a recreational machine, the suspension is definitely on the sporty side.

Yamaha carried the confident, controlled ride feeling into the passenger compartment of the Wolverine R-Spec as well, and the seats were moved almost 3 inches toward the vehicle center to reduce the roll dynamic of both the passengers and the machine. The driver and passenger get a very comfy, high back bucket seat with a lap and shoulder belt to help keep them in place. We were especially fond of the doors on the Viking last year, but Yamaha felt there was room for improvement in that area as well and those have been upgraded with new hinges and latch mechanisms. Seating position is more upright than on many true sport machines, but it does provide an excellent view of the trail ahead, and full access to all dash controls. There is no tilt wheel on the Wolverine, but the preset steering wheel location is comfortable, as is the shift lever and parking brake location on a console between the seats. One feature we’re not completely sold on, however, is the center console which takes up quite a bit of space, but we’ll reserve our judgment until we can put in some seat time and see how it feels on the trail. We do like how Yamaha increased the leg and foot room for your outboard leg which will be a welcome feature for taller riders. In the center of the dash is a great looking digital LCD display that gives a reading on critical engine functions, as well as speed, trip data, etc. Overall, we can’t wait to get one in the woods to see how it feels and performs on the trail. 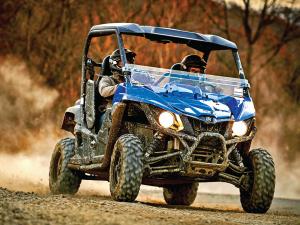 Yamaha realized there is a large segment of riders who like the feel of a sport machine, but sometimes want the climbing, crawling, and hauling capabilities of a utility machine. The recreation based Wolverine R-Spec is designed to fill that need. It’s not a pure sport machine, and not a rack and cinder block toting pure utility machine, but it shares some of the best traits of both. The Wolverine R-Spec is adventure and exploration waiting to happen.

The future certainly looks bright for Wolverines: the State of Michigan is on a healthy rebound, the once near extinct woodland creature is now slowly staking territory again, and even the sorry, whipping boys from Ann Arbor might snag a 3rd win next season – maybe. One thing is certain though, the new Yamaha Wolverine R-Spec has all the makings of a winner right out of the gate, and three wins out of four isn’t bad! 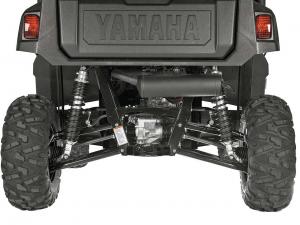