Ranch Time with the 2016 Kawsaki Mule Pro-FX and Pro-FXT
Written By:
John Arens 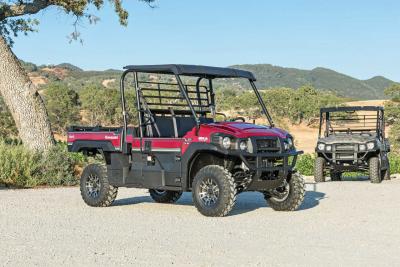 A year ago we were treated to a tour of Kawasaki's sprawling, Lincoln, Nebraska manufacturing plant for a factory tour, and for the introduction of one of the most important models Kawasaki has ever built.  There on the edge of the prairie is the birthplace of nearly every Kawasaki ATV, Jet Ski watercraft, Teryx Side x Side, and hardworking yet often overlooked Mule utility vehicle.  That day marked a turning point for the lowly Mule, though.  It was the unveiling of the completely new, modern, and most capable Mule ever, the Mule Pro-FXT.  To say we were taken by surprise is an understatement; we were highly impressed.  After our factory tour, we were even treated to some ride time on the new machines, but a few hours around the test course doesn't always tell the whole story.  We needed to get the new Mule Pro out for some real world work and ride time, where it would surely toil away for most of its days just like its long eared, namesake cousin.

Nobody is going to race a Mule. Instead they'll quietly take their place on ranches, farms, parks departments, and every other operation that has a use for a hard-working utility vehicle.  It was natural for us to try the Mule in the situation where it fits best. 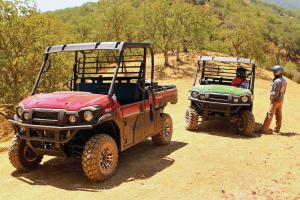 The Santa Margarita Ranch in California’s Central Valley is nearly 14,000 acres of huge, rolling hills, trails through the trees, water crossings, and either cattle land or vineyards.  Interestingly, the current family owners are only the 4th owners of the ranch which can trace its lineage back to the original Spanish land grant from the President of Mexico, then through Spanish missionaries on the old Mission trail, and finally to two families.  A million or so years before, it had been covered by the sea, and a whale bone was even found on the property!  The only bones you are likely to find today, however, are from cattle, deer, bears (we saw one on our ride) and whatever small critters roam the ranch.  It was the perfect place to put the new Mules to work.

The main difference between the Mule Pro-FX and Mule Pro FXT is the number of passengers they can haul.  The FX model has one bench seat and a large rear cargo box, while the FXT model has a trick no other Side x Side can match; it can transform from a single bench seat to two rows of seats capable of hauling the whole crew!  It accomplishes this feat by transforming the rear dump box, and it’s an incredibly clever feature.  Making the transformation is super easy, requires no tools, and we did it by ourselves in less than a minute!  When configured for six passengers, there is still a good sized cargo box in the back.

We like the styling of the new Mules!  Kawasaki did a great job with the plastic and it is both pliable enough to take plenty of abuse, and tough enough to resist scratches.  The overall look is tough and ready for business.  Half doors keep the riders protected and fully inside the vehicle but they also latch securely and don’t rattle on the trail.  About the only change we would make to the doors would be to have them open a little further.  This would be important when wearing heavy gear or hunting boots. 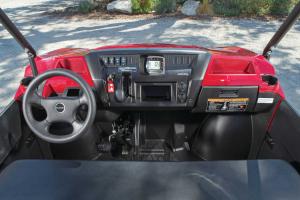 Once in the front seat, you have plenty of room for your arms and feet, and pedal spacing is very good.  All controls are dash mounted, and we especially like the switch panel which is within easy reach.  In the center of the dash, an excellent digital display tells you everything you need to know about the machine.  There is plenty of storage space both in and under the dash, and large cavernous areas under the seat.  About the only place Kawasaki could have put a little more effort into is the bench seat.  It’s one huge piece of flat vinyl, with no sculpted area for your butt.  Providing a little more foam while creating individual seating pockets would bring it more in line with the rest of the highly stylized machine.  As it sits now, it reminds us of the flat seat from an old golf cart: functional but definitely not flashy.

When you want a little extra flash from your Mule, Kawasaki’s top-of-the-line model is a very sharp looking Mule Pro-FXT Ranch Edition.  The Ranch edition comes with a Metallic Titanium paint job, a Warn Vantage Winch, two-tone padded seats, and special badging.  It’s a great looking machine.  With NINE different models in the Mule Pro family, there is definitely a model for everyone. 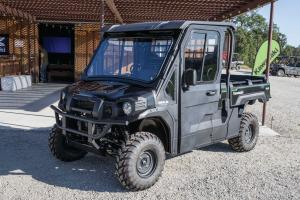 Kawasaki has a habit of building their machines on an excellent chassis, and we have no doubt the new Mule chassis is the best in the sport.  Main chassis members are steel tubes with plenty of cross bracing for support and hauling heavy loads.  When each chassis is completed, it gets a chemical bath to remove any oils or contaminants, and then a powder coat finish for corrosion protection.  The suspension on the new Mule Pro-FX and FXT models is also a huge improvement over previous models.  Rather than being designed strictly for work, the new Mule Pro models have fully independent front and rear suspension with 8.7 inches of wheel travel and the ground clearance to tackle the trails with ease.  There isn’t much that can stop one except the four 4-wheel disc brakes.  Kawasaki engineers were also quick to point out the high break over angle to reduce the chance of high centering, even on the longer FXT model.  It also comes with a turning radius of only 16ft, which is by far the tightest turning machine in its class.  That’s practically ATV tight, making it extremely nimble on the trails.

Both the new Mule Pro-FX and FXT come with a liquid cooled, 812cc three cylinder with Fuel Injection.  One mandate to the engineering crew was to make the Mule easy to maintain, and that meant locating the air filter, oil filter, and battery in easy to access locations.  The air filter and battery are mounted just inside a small panel on the right side, while the oil filter is mounted on the engine as usual.  A CVT transmission with High, Low, Neutral, and Reverse transfers power to the wheels, and torque is listed at 48 pounds, with a towing capacity of 2000 pounds even with a full load of passengers and 1000 pounds of gear in the bed.  For powering accessories, a 75 amp generator cranks out over 60 amps at 2,000 rpms which should power your winch, accessory lights, and just about anything else you can plug into multiple 12V outlets.  When you need extra traction, a button on the dash engages 4wd. 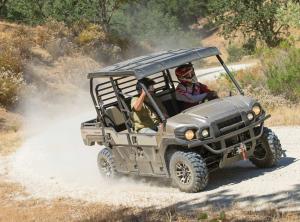 On the trail the mule is so easy to drive it could almost be called intuitive. We found ourselves not even really thinking about the driving, and instead spent much of the time talking with our passenger who just happened to be one of the Mule's engineers.

Like its namesake brethren who spend their lives trotting up and down the walls of the Grand Canyon, the new Kawasaki Mule Pro-FX and Pro-FXT surely is not scared of any steep climbs.  All we needed to do was point the Mule up the side of the hill and it would begin the climb.  It didn't really matter how steep the hill was; the three cylinder Mule engine would never run out of power.  It would run out of traction from time to time, though, especially in loose terrain.  That’s not to say we dislike the stock Duro Frontier tires on the Mule Pro.  They're an excellent choice with plenty of open space between lugs for wet or sticky terrain, yet the lugs have a large flat surface on top for a smooth ride on hard surfaces.  We just like to see what a machine can do, and to be fair, we often try climbs in 2wd first just to find the limits, and then use 4wd the next time when we really want to see how it performs.  In four-wheel drive, it is a very capable climber.

We’ve said for years that Kawasaki has the best power steering system in the sport, and we have not changed our opinion. Steering on the mule is excellent, with enough assistance that it is very possible to drive with one hand, yet it does not take away feel of the terrain. We especially like how the power steering absorbs any unwanted feedback like when you clip a rut or log along the trail. Rather than snapping the wheel back, it absorbs the force and protects your wrists. 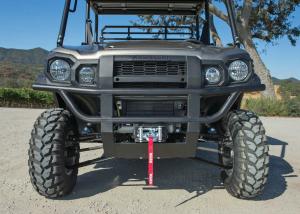 Since the mule chassis is meant for heavy duty hauling and hard work, the suspension must be capable of carrying heavy loads.  That usually means the vehicle will ride fairly stiff with no weight in the back. Kawasaki engineers did a good job with the mule suspension and achieved a good balance between the fully loaded and unloaded ride characteristics.   In choppy terrain you can feel the bumps a little bit, but it's not bad or a deal breaker.  Larger bumps are absorbed easily, and one feature we really like is how the vehicle tracks across uneven terrain. Some of the trails we tried had deep ruts or rain washouts.  We purposely steered the mule through and across these ruts to see if the steering would dive in and follow the ruts.  We were very happy to learn that the Mule stayed exactly where we placed it on the trail rather than darting back and forth like a scared rabbit. 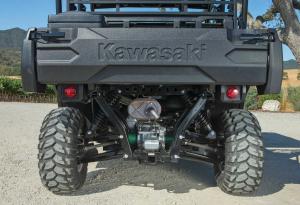 As we wound between trees and up and down the huge hills of the Santa Margarita Ranch, we realized this is exactly what the new Mule was designed to do better than any Mule before it.  At its base, it is a supremely capable, heavy-duty, utility based machine, but on a casual ride it felt amazingly stable and actually nimble.  It was a joy to drive and we would gladly take it on weekend trail rides with no second thoughts or problems.  It’s quiet, vibration free, there are no chassis or suspension bushing squeaks, and it’s comfortable.  What more can you ask for?

NOTE***Specifications for standard single seat Mule Pro-FX model nearly identical to above except for the following: