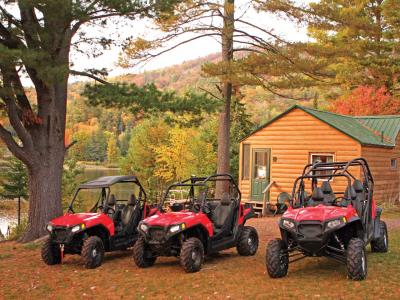 Six foot waves pound into the rusty stones and exposed bedrock of Lake Superior's southern shore. With no visible land across the water, several in our group more accustomed to the deserts of the Southwest wonder aloud if they are standing at a northern ocean. They’re right in a way; by volume Superior is the largest freshwater lake in the world. Along the beach in either direction, there is nothing but frothy waves, the red stones rich with raw iron, and a deep green pine forest behind, all under an impossibly blue sky. Our trek has led us to one of the most pristine and remote areas of the country. Welcome to the Keweenaw Peninsula.

The Keweenaw Peninsula thrusts far out into Lake Superior from Michigan’s Upper Peninsula, and with the Portage River slicing across its lower section, it could be called an island. Mining and timber harvesting dominated the local economy a century ago and shafts as deep as 9000’ bore through the landmass, but the copper and iron mines have mostly been capped. Today a mature forest of both hardwoods and pines thrives in the cool, moist air, where summers are short and cool, but winters can be severe and last until May. Since the Keweenaw is in effect surrounded on all sides by water, it gets massive amounts of winter snow, more so in fact than any other non-mountainous region of the U.S. When driving North into the Peninsula, visitors will no doubt be amused and perhaps frightened by a snow measurement pole that stands over 30ft tall! The season record is 391 inches, but the average is around 250. Bear, deer, fish, and all types of wildlife abound, but it takes a hardy soul to survive here and call Keweenaw home. Whether here for a weekend or for a lifetime, there is no other place like it. 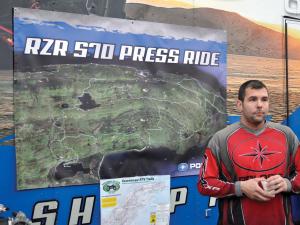 Despite its remote location and sometimes severe weather, the Keweenaw does have several things going for it. It has year round unparalleled natural beauty, the residents are super friendly, it’s a paradise for sportsman and thanks to the considerable efforts of the Keweenaw ATV club, it’s got some of the best trail riding on the planet.

Michigan’s Upper Peninsula is a vast, heavily forested territory with thousands of miles of National Forest Roads, State Forest Roads and County Roads that are legal for ORV use, and over 1300 miles of state registered ORV trails. In addition, there are countless logging, mining, and access roads that branch off into the forest, although most are uncharted and there’s no telling where you might come out. Before you charge down any trail, you better be equipped with a GPS, a good map, and know how to use both. Some trails will also venture onto private property so you would need landowner permission in those areas. Just like when riding anywhere else though, be respectful of the trails, of others on the trail, and be prepared for anything.

Terrain in the Keweenaw Peninsula ranges from marshy areas along lakes or swamps to rocky bluffs that offer amazing views of the peninsula. Most of the trails offer sandy terrain with a few rocks thrown in, but don’t be surprised to find mud or standing water. Think trails winding through the woods rather than high speed runs across open desert. Since the area gets a lot of moisture, dust won’t usually be a problem but it is possible during summer months. You also won’t meet a lot of other riders, and on our 85 mile loop through the woods we only met one other person. This means you will need to count on yourself should you run into any trouble since your chance of help from other riders is slim. Cell phone coverage is also limited at best, so be prepared with anything you might need. We suggest a tire repair kit (or better yet an extra tire), tools, a basic medical kit, snacks, water, and some camping gear just in case you need to spend the night. We also suggest you carry the snowmobile map as well because it is possible to venture onto the wrong trail with different numbers than the ATV trails. Since you are surrounded by water, you’ll never get too lost but local club members warned us to be aware of any old holes left behind by mines long ago forgotten, but the danger remains. Should you hop off your machine and go for a stroll in the woods, make sure you don’t inadvertently drop yourself into a miner’s test hole of unknown depth. It all comes down to using common sense and being prepared. 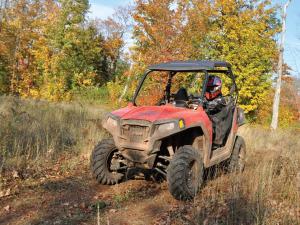 One thing you’ll definitely need to be prepared for is awesome riding in every direction. Since Copper Harbor is at the northern tip of the peninsula, most riders make it their destination, but there is plenty to see along the way. Depending on where you start, the trails will take you past old mining towns, but you’ll need to plan gas stops accordingly. We usually fill up whenever we get the chance on long rides, and there is a pump at Lac LaBelle where we stayed. One thing you’ll definitely want to try is a local pastry called a “pasty” which is sort of like a Hot Pocket / meat, potato, & carrot pie that was introduced by Finnish immigrants who migrated to the area to work in the woods or the mines. While large scale mining has pretty much come to a standstill, the pasty remains as popular as ever and the town of Calumet even has a Pasty festival! Don’t worry though, it’s possible to grab everything from a slice of pizza to the delicious meal we had at the Bear Belly Bar at Lac La Belle Lodge and the little bars / restaurants found in the old mining towns are always interesting.

Thanks to Michigan’s expansive trial system, you can actually begin riding the Bill Nichols trail when you enter the Keweenaw. Pick up trail heads in Ontonagon, Mass City, Twin Lakes State Park, Toivola, South Range, at the Houghton waterfront and the Hancock waterfront at the Ramada Inn. To cross the Portage Lake bridge from Houghton to Hancock, however, you will need a police escort, but riders who’ve done it recently suggest the local police force are happy to help out. Wildlife Refuge Cabins is right on the trail in the town of South Range about five miles south of Houghton and we’ve known them for years. They’ll gladly fix you up with a place to stay right on the trail for your adventure. You’ll find the area is very ATV friendly and happy to help you regardless of where you plan to ride. If you intend to ride to Copper Harbor, though, you’ll be on trails built by the people who have done the most to make your adventure possible, the Keweenaw ATV Club. 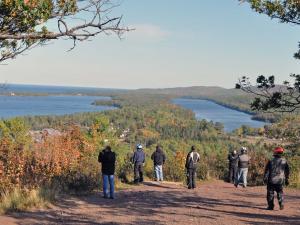 The Keweenaw ATV Club is a group of highly dedicated riders based out of Calumet Michigan. The opening page of their web site lists the goals of:

Creating a trail system that extends from the Keweenaw Point to Houghton County.
Connecting all municipalities and spurs in Keweenaw and Houghton Counties.
Working within the guidelines and laws of regulatory agencies as they pertain to off-road vehicles.
Aiding in Search and Rescue operations whenever called upon.
Fostering Youth Safety Programs.

The Keweenaw ATV Club is one of the best organized, highly motivated, and well received clubs anywhere in the country and they’re the largest in Michigan. They’ve been the driving force behind the development of the Keweenaw trails as they exist today, and to make the current trail system possible, they had to forge an agreement between state and local officials, different governing bodies, law enforcement agencies, private property owners, and even snowmobile enthusiasts. It was a huge task that called for the ability to address the concern of all parties, and just about anywhere else we would think the task impossible. The U.P. is one of those special places where people can still reason and see the other side’s point, even when they disagree. We congratulate all those involved in the trail making process for their ability to figure out how things can be done rather than the reasons they cannot. As approval was granted, club members enthusiastically went to work clearing and marking trail, installing drainage, and preparing for their guests. 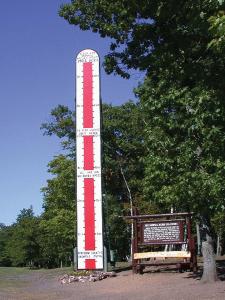 Today the club boasts a very active membership and is headed by the skilled leadership of President Mike McMahon, Vice President Mike Gagnon, and Secretary Ray Chase. As with most enthusiast club leaders, they do it to give back a little to an activity and community they have enjoyed so much themselves. "I started this a long time ago and it's my passion," said McMahon. It’s been a ten year process to develop the trails from Hancock to the tip of the peninsula, but it has also become an important part of the local economy. Riders now come from across the Midwest to explore the area. Keweenaw ATV Club Secretary Ray Chase says, “Ninety percent of the trail system up here is snowmobiles, but snowmobiles run three months out of the year. ATVs can run seven months out of the year. ATVs also outsell snowmobiles in the Upper Peninsula at the rate of 14 to 1." That’s a huge margin and drawing even a small percentage of the total ATV & Side x Side sales is a win for the local economy. Chase added, "Economically, we need the ATVs up here. The riders come here, stay for a bit, use the trails, and eat and buy locally."

Today the club continues to work on new trails and their efforts have not gone unnoticed. That was most evident last fall at a trail dedication that featured two bands, a State Representative, a State Senator, a local sheriff and a large group that showed up to celebrate the event and praise the group for their contributions to the community. The Keweenaw ATV Club is a class act. 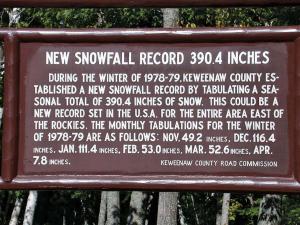 A New Favorite Place to Ride

There are some organizations you want to be a part of and special places you want to ride; this place has both. After one ride in the Keweenaw Peninsula, we knew we would be coming back. Since we grabbed a membership application, hopefully we’ll be heading back as a member of the club. The trails here offer incredible natural beauty year round, especially in the fall when the leaves turn a million different colors and it’s like riding through nature’s fireworks, there is plenty of variety with the changing terrain, and the locals make you feel at home.

There are a few special places across North America that offer a riding experience like nowhere else: the mountains and canyons of Utah, the giant trees and huge dunes of the Oregon Coast, Mexico’s Baja Peninsula, British Columbia, Arizona’s trials to the Grand Canyon, and now the winding trails to Superior’s shore on the Keweenaw Peninsula. We think of it often and we can’t wait to smell the wet leaves, hear the waves break onto the rocky shore and drink in and explore Keweenaw’s beauty once again.