Playmate of the Year - The Suzuki LTZ 400 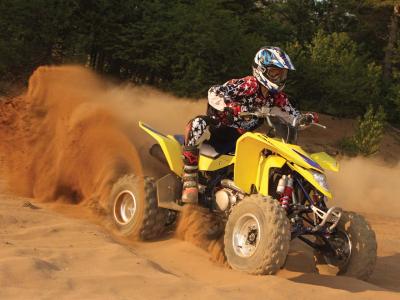 We're always happy to head to the track on an ATV built for racing. The performance, handling, and power from the 450cc racers on the market today was only a distant dream a decade ago. Like most ATV owners, much of our riding is on the trails and in the woods however, and that's not always the best place for a high strung racer, better suited to rocketing corner to corner and between jumps than winding through the trees or gliding across the dunes. Championship winning performance does not often translate well to all day play riding, but we've found one sport ATV that bridges the gap perfectly.

When the 2003 LTZ 400 was released it marked a watershed moment in sport ATVs. The new Suzuki sport quad came with a state-of-the-art water cooled 4 stroke engine, a high strength steel frame, race inspired styling, and an aggressive stance and riding style. It could attack any obstacle on the track or could ride the trails all weekend with equal ease, and it was exactly what a rapidly expanding sport quad and racing market had been asking for. The new 'Z offered features, handling, and performance never before seen on a sport atv, making it an instant hit, and it rapidly overshadowed its only rival at the time, the Honda TRX 400EX. Within weeks of its release there was a yellow wave of new Suzukis taking every riding area and race track by storm. Once again Suzuki had released a model that changed the sport, and the LTZ 400 reigned supreme. When Suzuki released the razor sharp, pro class level LTR 450 racer a few years later, the LTZ took a back seat to it's honed for the track big brother. The old saying "racing improves the breed" was not lost on the Suzuki team however, and lessons learned on the track were soon to be incorporated in the second generation LTZ 400.

As with most things in life, looks are important, and the LTZ 400 is no red headed stepchild. (No offense to those who are!) The LTZ 400 looks GREAT! It's sporty, strong, and the body styling hints at the performance within. It's the perfect compliment to the LTR 450, and we couldn't wait to climb aboard! 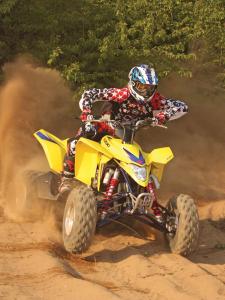 We're always careful to check the ergonomics and bodywork for any little edges or annoying tabs that catch your gear when riding, and we're happy to report the Suzuki had nothing of the sort. It's clear the 'Z was meant for aggressive action, and the rider sits in a “charging” position, with a bar position designed to help maintain better arm leverage, exactly as a sport ATV should. The foot pegs are well placed, and at 46mms wide, are the same size as on the LTR 450. Also just like the 450, the 'Z gets Suzuki's trademark T-bone seat, which is great for moving your body around on during aggressive riding and cornering. Ahead of the steering column is a small panel with a few warning and maintenance lights, and just in front of your right knee is an easy to use reverse lever. Finally, the front brake lever is also adjustable just like on the LTR 450 as well.

The LTZ engine is a thoroughly modern, liquid cooled, 398cc 4-stroke, single-cylinder, dual overhead cam engine with a counter-balancer. To keep things cool on all day trail rides Suzuki gave the 'Z a large capacity radiator with an “on-demand” thermostatically controlled fan for consistent operating temperature, and every once in a while you will hear it kick on. The bottom end of the engine features a dry-sump lubrication system with an oil reservoir mounted just ahead of the engine, and a 5 speed gearbox (with reverse) to get everything rolling.

Electronic Fuel Injection is perhaps the greatest thing to happen to ATVs since they added a fourth wheel. (Also a Suzuki idea) The LTZ 400 is equipped with Suzuki's EFI system with a 36mm throttle body and 12-hole injector that delivers the fuel/air mix in an efficient fine-mist spray pattern. Believe it or not, the pattern and number of holes, and even the injector hole angle makes a big difference in how efficiently an EFI system delivers fuel to the engine, and how well it runs. Suzuki even straightened and narrowed the intake tract on the 'Z for higher airflow velocity and the cam was reshaped for more low to mid range power. A 16-bit CPU manages the injection timing and based on throttle position, engine rpm, temperature, crank position, and other data, feeds in just enough fuel. The Suzuki system does have one added twist in that it works a little like a traction control system, limiting fuel input when it senses very rapid changes in RPMs - the telltale sign of wheel slip. 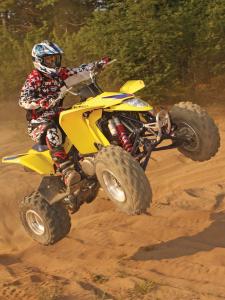 A flip of the key kicked the electronic fuel injection system on, and a stab at the starter quickly brought the LTZ 400 engine to life. The engine starts very easily and we really like the sound from the exhaust system which gives a throaty rumble that sounds much like the LTR 450. Suzuki reworked the exhaust for better low to mid range power, and a drop of our foot brought the lever smoothly into gear. We were off!

The 'Z runs smooth and crisp throughout the power band thanks to the EFI, and rather than spinning the wheels it hooks up and drives you forward. The engine lets you know it is all business, and the pull continues from right off the bottom until well into the mid range. All the power in the world means nothing without an equally capable suspension however, and for that Suzuki again turned to the lessons learned on the track.

Years of racing and information gleaned from countless hours testing with some of the best riders on the planet gave Suzuki engineers a very good idea of what the LTZ 400 needed for suspension. It would be not much different than its racy brother the LTR 450, but a little more forgiving for new or less experienced riders. 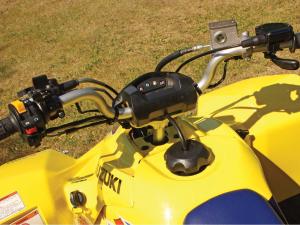 The front of the 'Z features dual A-arms with fully adjustable, piggyback reservoir-style shocks that provide 8.5 in. of wheel travel. Front shocks and springs were designed for a softer initial feel that becomes firmer throughout the suspension stroke, and we found them to be adequate, but neither outstanding or completely off. In reality, all the manufacturers are forced to design a suspension package that works adequately for riders of all size and skill levels, and widely varying terrain. There are just too many variables to dial it in perfectly for everybody, but the 'Z 400 shocks are far better than some competing units, and they'll work for many.

At the rear of the LTZ 400 chassis is a linkage-type suspension with a fully adjustable, piggyback reservoir-style shock offering 9.1 in. of wheel travel and 10.4 in. of ground clearance. Luckily the rear shock is highly adjustable because our first impression is that the rear was so stiff the tires had a hard time hooking up. Our quick solution was to back off almost all spring pressure and completely soften the compression screw to its lower limit, which helped greatly, but it's still going to be pretty stiff for a lot of riders. The best solution would be a softer rear spring which we may try next. After our initial suspension changes the LTZ really became a completely different machine and one we really began to like! It had performance, handling, and looks!

Suzuki put a lot of time into the fine details on the 'Z 400, and the caster, camber, wheelbase, and width were all designed for performance. Even the tubular steel chassis was redesigned with thicker tubing in some areas both for reliability and to enhance the ride. The result is a machine that is a blast to play on all day with enough power for nearly anybody, and handling that is precise, predictable, and easy to control. 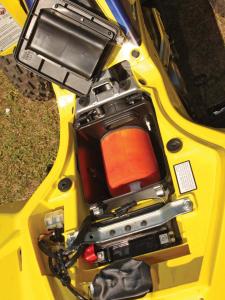 A huge factor we consider in any new model is maintenance. It should be easy and quick, or people will ignore it. Thankfully on the LTZ 400 the air filter is easily accessed under the seat, and the oil filter in conveniently located on the right side of the engine. There is no excuse not to have clean oil and a clean air filter on this model! Unfortunately chain adjustment is still a pain on the LTZ 400, and adjustment is a matter of several wrenches and bolts through a sliding axle carrier, rather than the super simple eccentric type system found on the LTR 450. Yes it's a pain, but we understand the reasoning on this one. Tooling up for a sand cast swingarm would cost a fortune, and we'll give Suzuki a pass this time and hope that in future models we'll get our wish for a simpler chain adjustment system.

We really like the Suzuki LTZ 400 and it is easily our choice for the best ATV in its class. It's so good in fact we believe it is better than some competing 450 models. Sure the chain adjustment can be a pain and the shocks are a little stiff, but there is so much to like about the LTZ 400 the benefits far outweigh any drawbacks. It's very comfortable, easy to ride, handling is precise, and the EFI gives the motor a nice, peppy powerband. In our experience it has also proven very reliable. We're always happy to take one to the tack or trails, and for many riders it will be perfect!