A New Tool for an Old Job
Written By:
Staff 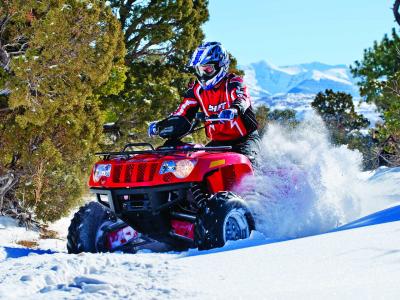 A snow plow is one of the most useful tools you can use with your ATV.  An ATV can maneuver into areas a tractor or truck mounted plow can’t reach, and it can make short work of a tough winter job.  Most snow plows follow a similar design, but recently American Manufacturing introduced a new trick for your old dog.

Almost every snow plow is attached to the ATV by one of two methods; either a short lift arm and pivot bar bolted just beneath the front bumper, or more commonly, by a long, undercarriage push bar system.   A front mounted winch is the lifting mechanism in both cases, and the blade swivels on a pivot just ahead of the winch hook attachment point.  To swivel the blade for moving snow in either direction the rider hops off, digs the pivot angle locking pin out of the accumulated snow, rotates the blade to one of several preset holes, and slides the pin back in.  It’s generally an easy enough task but it requires hopping on and off your ATV then finding the locking pin and holes every time you need a blade angle change.  The TURBO TURN by American Manufacturing is designed to make that task a lot easier and quicker. 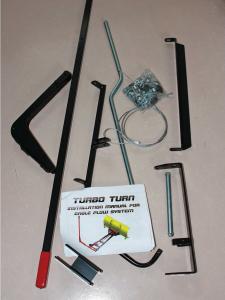 Turbo Turn to the Rescue

The Turbo Turn lets you operate the plow and make blade angle changes all from the ATV’s seat.  The working end of the Turbo Turn attaches to the plow blade pivot, and a mechanical linkage reaches back between the undercarriage push bars.  Next to your left foot is the operating lever which reaches up next to the ATV’s floor board or foot peg.  The lever controls the blade pivot angle lock pin, and turns the blade.  It’s quite easy to bolt the Turbo Turn to Cycle Country, Moose brand, and Eagle Plow systems that use the undercarriage push bar design.  The Turbo Turn does not attach to plows with the short, front bumper mounting system however.

To operate the Turbo Turn the rider first pulls the lever inwards towards their body.  This operates a cable which releases the pivot angle locking pin.  With the lever still pulled inboard, the rider then pushes the lever either forward or back to pivot the blade, then releases the lever to its standard position to drop the blade pivot pin.  This locks the blade into the new position.  The whole actuation takes only seconds, and about the only thing we would do differently is to shorten the operating lever so that it was slightly lower than handlebar height.  That’s just our personal preference, but the Turbo Turn system is perfectly functional as designed and is a much quicker method of blade angle adjustment. 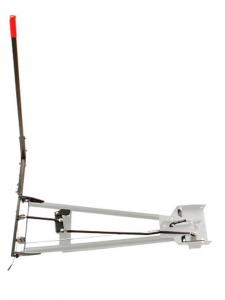 American Manufacturing did a great job with the Turbo Turn kit.  All the parts are beefy and well made, with clean holes and no sharp edges or burrs.  Every part is either powder coated or zinc plated for corrosion protection, and the hardware and cable are packed neatly.  Thankfully it also comes with an excellent set of instructions with plenty of photos to help you along.

The right tool makes any job a little less difficult, and the Turbo Turn makes your ATV a better snow moving machine.  When the work is done it’s also a blast to play around making tracks, doing power slides, and busting drifts on your ATV, but we’ve actually been enjoying moving snow also.  After all, any riding is good riding, and the Turbo Turn makes a winter chore easier. 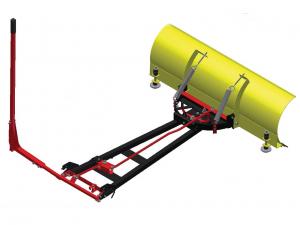