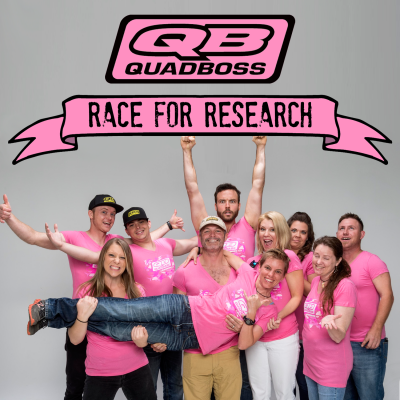 FORT WORTH, TX – This year, the QuadBoss team wanted to do something special for breast cancer awareness month. Something that wasn't just handing out pink t-shirts or posting a picture. Something that could help raise money for the National Breast Cancer Foundation, while still taking advantage of our competitive spirits.

With that in mind, we created the QuadBoss Race for Research. The race will be tournament-style, which means we'll set up racers in a seeded bracket and, two-by-two, they’ll face off until one is named the Queen or King of the Race. We’ll be racing Razor Crazy Carts at our Texas headquarters on Thursday, October 22.

Up until the morning of the race, each racer will be collecting donations. Riders’ donation amounts will determine their racing seeds, so fans are encouraged to donate toward their favorite to help them top the leaderboard. All donations will go to the National Breast Cancer Foundation.

QuadBoss will also match up to $1,000 of total donations received, doubling the money going to one great cause! So why wouldn't you donate?