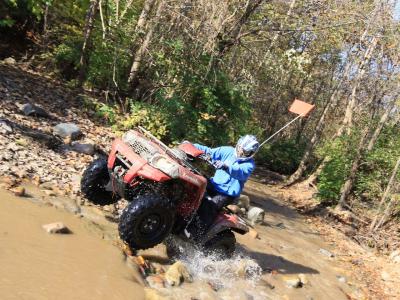 Rural Indiana is known for being one of the most productive agricultural regions on the planet.  A back roads drive on a sunny, fall day will display endless fields in every direction, with soybeans drying in the sun, and brown corn leaves rustling to the slightest breeze, waiting to be harvested.  Scattered along the roads and in between the practically endless corn and bean prairie, giant, silver, grain bins dot the sky and mark the small towns that are, for all intents and purposes, a Midwestern oasis.  This is clearly farm country, the veritable “bread basket” of America, and for much of the world.  Soil here is for planting in and not for riding on, unless you’re riding something that says John Deere on the side.

Back Home in Indiana

When we first heard of a ride area called the BADLANDS Off Road Park, we naturally assumed it was near the desolate stretch of South Dakota known for its unusual geological formations.  Then Kawasaki invited us to try out their 2010 lineup at the Badlands, and we were off to Attica, Indiana for an awesome fall day of riding.  Coming from farm country ourselves and having been through much of Indiana, we weren’t sure exactly what to expect.  From our travels, we knew the area is relatively flat, with the only variation being a meandering stream or river and the ridges that follow them.  The riding they do here is mostly of the flat, oval variety, and this is where Jeff Gordon cut his teeth behind a steering wheel.  In late October, Crawfordsville does host the Iron Man round of the GNCC series only a few miles away, but that seems to be the exception to the local flavor rather than the rule. 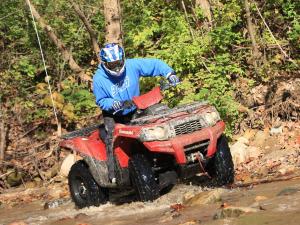 Attica, Indiana fits the mold for the typical Midwestern, farm town with one exception.  Just past the grain elevator is the entrance to the Badlands Off Road Park, owned by Kyle and Stephanie Knosp.  Unlike many ride areas that seem to be one step below a Leper colony on the social ladder, and accordingly placed as far from town as possible, the BADLANDS Off Road Park is right on the edge of town just beyond the drive of middle class houses with neatly trimmed lawns.  A private campground adjoins the property, and many park users make the most of it.  Set up your tent, unload your ATV or Side x Side for the next day, and relax by your camp fire for the evening.  If camping is not your thing, there are plenty of local lodging options, restaurants, and everything else you could need nearby.

Before entering the BADLANDS, every person through the gate must sign the required paperwork, and if you are not at least 18, bring a parent or legal guardian with you.  There is a fee to ride the park, and it varies depending on the number of days, but it’s cheap entertainment.  You’ll spend more in gas and grub just getting there than you will for your ride pass.  A handy map and a few simple safety rules will get you on your way, and they’ll rent you an ATV or Side x Side if you want to give off roading a try before jumping into a long term payment.  The only vehicles not allowed in the park, due to their speed, are sand rails or buggies.  As expected, helmets are required, and you can even rent one, but the thought of spending a day with our head in a rented brain bucket is less than appealing.  Bring your own helmet or borrow one from somebody you know.  Once inside the 800 acre park, you will find a large parking area and adventure in every direction. 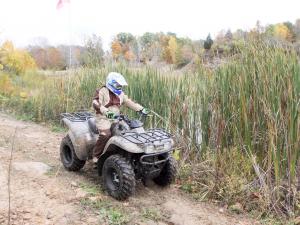 We were amazed at the varying terrain within the park.  Since it was a large, local quarry a few decades ago, there are many interesting trails and haul roads, and just about every type of terrain common to North America can be found here.  It makes the park seem much bigger than it actually is!  Just off the main parking area is a large, open, sandy section with good sized hills to climb on any side.  There is a wide track that we followed, and after blasting up one sandy hill, jumping down the back side to the expansive play area at the bottom, and then far up the other side, we were suddenly dropped from open dunes to northern forest.  The sandy main trail wound through trees, with other trails branching off in every direction.  It was amazing how rapidly the territory changed, and before long, we were at a Deep South style creek crossing and mud bogs.  Here the leafy hardwood’s canopy covered the trail and riders dove into the creek, carefully picking their lines as they paddled to the other side.  Not all made it!  A slippery hill climb awaited those who made it through the creek, and so many 4wd vehicles found themselves stuck between the water and an impossible (for them) hill climb a tractor was permanently stationed nearby to give the less fortunate a tow.  Although the climb was a challenge, most ATVs or Side x Sides in 4wd could make it rather easily as long as the driver didn’t screw up.

There are 5 main trails that wind through the facility.  We never saw all of them, and there are so many side trails branching off in every direction we probably wouldn’t have known it anyway.  All main trails are marked with directional arrows that are color coded for the level of difficulty, ranging from red, yellow, orange, green and white.  Oddly enough, orange is the most difficult with yellow the easiest.  In one area, we even found a couple huge culverts and a rocky, flowing stream, and we jumped our Kawasaki Teryx into the pool below.  It was a blast!  In many places, we found Jeep and 4wd truck enthusiasts slogging through the mud, picking their way through the rocks, and generally having a fantastic time as demonstrated by the smiles on their muddy faces.  If it wasn’t for our goggles, we would have looked the same! 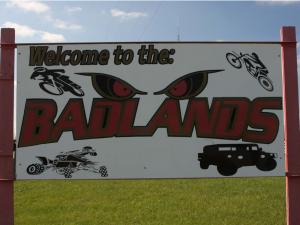 After a morning exploring the trails and challenging ourselves on just about every type of obstacle, it was time to grab a Kawasaki KFX 450 and head to the motocross track.  We really enjoyed the motocross track which features a fun, natural layout with a few elevation changes, some nice sized jumps, tabletops, and huge berms to rail around.  It was a blast turning laps, and the KFX seemed perfectly matched to it.  There are a few motocross courses at Badlands, but we left the supercross style course to the bikes which are better suited to it.  It was a great time no matter which track or trail we rode.

When Can We Go Back?

We’ve been to a lot of riding areas, and the Badlands Off Road Park is a hidden gem.  It’s perfect for testing a machine in every type of terrain, and we wish we lived right next to it.  They’re even open in the winter!  It has a little bit of everything, and whether you like rocks, mud, creek crossing, dunes, hill climbs, motocross, woods or water, the Badlands Off Road Park has something for you.  It’s like riding in nearly every region of the country, all in the same day.  We can’t wait to go back to the fields of Indiana!