We test a Polaris plow
Written By:
John Arens 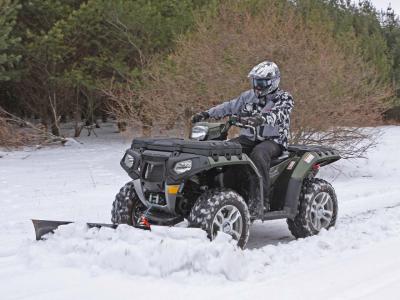 For those of us that live in a northern climate, the first snowfall is often a wondrous event. School children leap from their desks to gather at the windows, amazed at the fluffy, giant flakes that drift to the ground, slowly turning everything pristine, pillow soft, and white. Invariably, a few radio stations can’t resist playing “White Christmas” for a sentimental caller or two, and for one quiet afternoon, it’s Americana, as captured by a Norman Rockwell painting. Children rush home to build snowmen, people smile and wave at passing cars as they clean the drive, and all is well with the world, at least for a few glorious days. Soon, however, the wondrous, white world outside begins to grow old. Day after day, more of the white plague pours from the sky, each time requiring renewed effort to open the drive, only to have the passing snowplow and it’s demon driver hurl a frozen Tsunami back into the path you just cleared. Days turn to weeks, and weeks to months, the sky always grey, and the task master outside requiring, yet again, a penguin-like march across the bitterly cold, barren tundra.

Plowing out the drive is never going to be terribly exciting, but at least by using your all-weather, all-terrain loving buddy in the garage, it can be a little easier on your back. Regardless of where or when, riding is still riding. Recently, we tried an ATV-mounted plow from Polaris that promised to make a dull job a little easier. 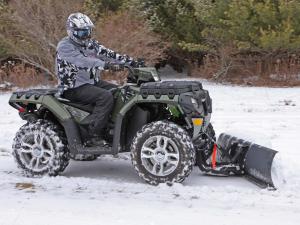 Ready for a Minnesota Winter

Despite the cold-weather-loving, snowmobile side of the company, every employee at Polaris has the same problem when it comes to cleaning out their own drive. When the company began building ATVs, it was only natural for them to mount a blade onto the front of one, and a very popular accessory was born. There are plenty of snowplows on the market today, but the Polaris system is one of the best.

Rather than have the dealer install the plow, we chose to mount the plow ourselves on a 550XP ATV. Our first task was to install the winch onto the ATV. That meant removing the metal, front bumper covering, a plastic grill piece, a couple bolts from the skid plate, and bolting the winch into place. So far no problem! Since the XP comes prewired for a winch, there was no need to route wires through the chassis, but it did require that we connect the wires to the winch motor. They must also be connected to the correct winch terminal or the electric motor will spin in the wrong direction! Controls for the winch are mounted on the bars, and that required opening the center -mounted light pod, and then plugging the winch control buttons into the existing harness. You guessed the next part; that meant pulling several of those d*@n torque head screws Polaris is so fond of. It was one of the hardest parts of the entire process, but we got through it. We also used a couple zip ties on the bars to keep the wires fastened securely and well out of harm’s way. At the rear of the ATV where the battery is located, a terminal block must be mounted and connections attached to power the system. Again, the XP is prewired, and there is no need to route conductors through the chassis. All locations are well marked and a set of clear instructions and color-coded wires made it easy enough. 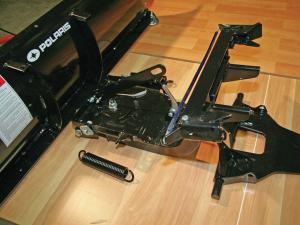 Our kit also required bolting the lift arms and swivel plate onto the back of the plow blade, and attaching a couple of the trip springs. We tightened the springs until there was no remaining slack in them and they were under tension, but not so much that they were at full draw. You want the springs to hold the blade steady when working, but allow it to trip if you run the blade into something solid under the snow. With a little help, it was easy to bolt the swivel mechanism together, and all parts are heavy-duty, well made components. The entire blade and all components are also powder-coated in a durable gloss black. The only remaining part was to bolt the plow mounting plate to the ATV frame.

The plow mounting plate attaches securely to the frame in several points. Once in place, the mount is out of the way and there is no need to ever remove it again, even for summer driving without the plow. We especially like how the tough plow mount even serves to protect the front of the chassis, and there is nothing that is going to hurt it! We were ready to go!

This has got to be one of the easiest plows on the market to attach. Simply drive the ATV up to the plow, slip the spring-loaded lift arm couplers over their attachment points on the frame, reel out a little cable from the winch, and connect the hook. However, we did also stiffen the front shocks a couple clicks for the added load. After those few steps, you are ready to throw down on Mother Nature’s worst! 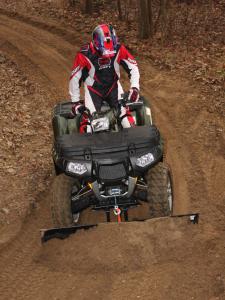 We love testing any new tool, especially one that works so well. The Polaris plow performed perfectly, and the entire unit is well thought out. One feature that makes it work so well is the lift arms are actually bent down from the frame and run parallel to the ground up behind the blade. This applies all force forward into the blade and straight ahead where the work is. Some other systems we’ve seen let the arms droop down from the frame. This means that the force from the ATV is both trying to push the blade forward and causing it to dig downward at the same time. The Polaris system is far superior in this critical design element, and an added bonus is that the blade can be lifted MUCH higher, allowing excellent ground clearance when transporting back to the garage or trailering. Swiveling the blade is super easy as well, and there are several preset angles allowing you to move material in either direction.

When underway, the plow works very well. As long as you can keep forward momentum, you can push the material. Drop the blade and push away, but don’t get overzealous and let too much snow drop behind the blade, or you can become stuck. A steady pace tends to work best, and by adding a little extra weight to the racks for extra traction, it’s amazing what you can go through. Look out Frosty! We also used the plow on a trail maintenance project to fill in ruts, and we found the Polaris plow can work very well in the dirt too. You’re not going to push heavy clay like a D-9 Cat, but it can easily work to grade a drive, or move dirt for landscaping. It beats shoveling any day! Once again, the trick was to keep steady momentum, and to utilize a little extra traction from ballast. When moving dirt, we found it takes a steady hand on the winch button to prevent the blade from digging in too far. Standing makes it much easier to see what you are doing, and this lead us to the best method for fine tuning blade adjustment. Simply shift your weight a little forward or back as needed to control blade height. After we learned that trick, it worked great! 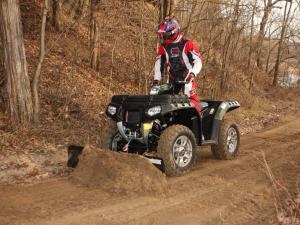 All in a Day's Work

We are thoroughly impressed with the Polaris plow. It’s well made, the mounting instructions are easy to follow, it requires no special tools to install, and with a little help, you can easily have it ready to go in a couple hours. When the snow beings to fall, attaching the plow to the ATV takes only seconds, as does removing it for summer riding. Once underway, it works great, and even though we originally intended only to move snow, it can work in the dirt as well. This is one plow we can recommend to anybody!