Why Gasoline Additives are Necessary with Ethanol-Blended Fuels
Written By:
Ed Newman 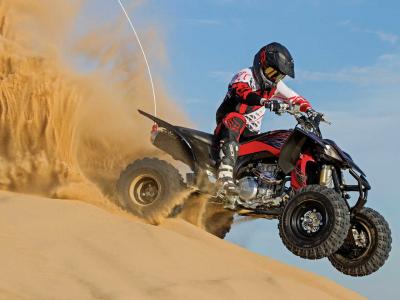 Change is the one constant in life. It’s also difficult, because when there is a change – whether in technology or how we do things – there are often unforeseen consequences. One change that affects everyone in power sports is the widespread use of ethanol in gasoline. How you prepare for the effects of high ethanol content gasoline in your engine can leave, or remove, a lot of change from your pocket.

Since 2005, the U.S. government has mandated that gasoline contain ethanol, most of it derived from corn. The aim of this policy, among other things, has been to reduce our nation’s dependence on foreign oil. What this change has done is to set in motion a number of unintended consequences, from its impact on food prices to mechanical issues in our ATVs and other equipment with small engines. Perhaps most ironic of all about the widespread use of ethanol, though, is that because of less energy available in the product, you can expect a 20% DECERASE in mileage, meaning you’ll end up using more fuel to go the same distance. It’s the engine damage we are most concerned about in power sports, though. The two main problems power sports owners have with ethanol are water absorption and phase separation.

Ethanol in fuel has a tendency to absorb water from the air and separate from the gasoline, sinking to the bottom of the gas tank, where it quickly degrades and creates gums, varnish and other insoluble debris that can plug fuel flow passages and negatively affect engine performance.  When this ethanol/water mixture is pulled into the engine, it creates a lean burn situation that increases combustion chamber temperatures and leads to engine damage.  Think of tiny drops of water hitting the top of your smoking hot piston, and you’ll get the idea. To meet emissions standards, winter fuel blends are already very weak and adding any water only makes the engine run even leaner. If you’re tempted to use dry gas in your tank, use it very sparingly, and NEVER use methanol which can damage materials used in your fuel system! If you have to use dry gas, ALWAYS USE ISOPROPYL types. 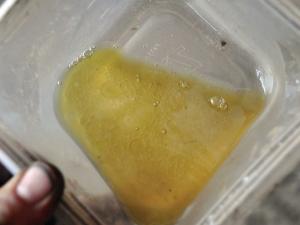 Stored gasoline has always been recognized as inherently problematic, long before ethanol was introduced to the mix, but the increased use of ethanol has made the problem worse. In vehicles like your truck with complex fuel management systems and knock sensors, or in vehicles used daily, it isn’t as big an issue, but when sitting idle in a container in the garage, ethanol blended fuels tend to degrade quickly. Because of this recognized chemical instability, a number of companies have produced a gasoline stabilizer to ameliorate this problem.

Gasoline is not formulated for long-term storage and can start to degrade in as little as 60 days, leading to clogged fuel injectors and carburetors, followed shortly by reduced engine performance. Fuels blended with ethanol exacerbate the problem, and when ethanol mixes with water and separates from gasoline, a chemical reaction known as phase separation happens. The ethanol/water mixture drops to the bottom of the tank and then can begin corroding the tank and engine intake parts as well.

Degraded fuel presents a major maintenance issue in small engines and power sports equipment, forming varnish, gums and insoluble debris that clog carburetors, fuel injectors and fuel filters. Add in the problem of carbon buildup on the tops of pistons, and you can end up with issues such as pre-ignition, rough idling and poor throttle response.  Fuel-related problems are only expected to intensify in the coming years as the ethanol content in pump gasoline continues to increase. 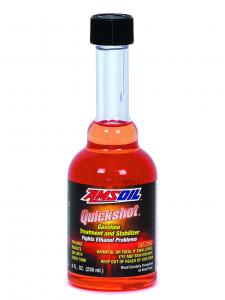 One way to address this problem of phase separation is to minimize the amount of time you keep unused gasoline stored. Another is to get in the habit of using a quality gasoline treatment like AMSOIL Quickshot SE, an award-winning product designed to address ethanol-based fuel issues by keeping water dispersed throughout the fuel tank, decreasing the chance of phase separation. Finally, a third but more difficult way is to find a rare independent station that still sells 100% gasoline and visit them often. Your toys and your truck will thank you! We’ve also found a tool that helps keep water out of the tank and a handy product known as Mr. Funnel that has the ability to filter out any water, which we especially appreciate when refueling our snowmobiles in the winter.

It’s a complicated world we live in, and increasingly complicated engines that power our off-road toys. It’s important to stay current by reading magazine tests, learning all you can about how best to protect your machine, and following good maintenance practices to make that happen. Things change. But they don’t always have to change without you knowing what to do about it.