Simple bolt-on Upgrades to make the Honda even better
Written By:
Pete Bengel 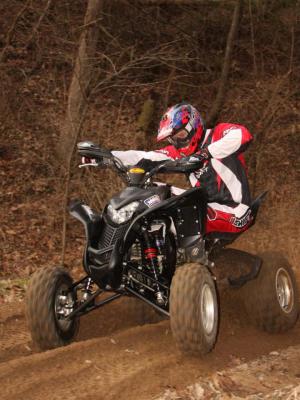 In a way, Honda’s voyage into the world of big-bore, IRS sport ATVs could be compared to Christopher Columbus’ voyage to the New World. Both embarked on a journey that few others had the courage to attempt, and for the most part, both journeys were a success. Columbus stumbled onto the New World, but then had to live with the problems that came with it. Honda developed an all-new engine and a unique chassis that could rock your world on two tracks, dunes, or desert …typical conditions on the western side of the country. On the flip side, their new TRX 700XX was a 505 pound ATV that was more than a handful in the hills and tight woods of the Midwest and Eastern US.

It’s easy to be a fan of Honda ATVs. Over the years, they’ve set standards for performance, reliability and, most importantly, versatility that few other OEMS can rival with any given model, much less over the entire product line. Take the TRX 450R for example. No matter what type of riding you want to do, a Honda 450R is always a reasonable ATV to choose. As we said, the 700XX does certain things very well. It has great ergonomics, excellent fit and finish, and industry leading reliability--all pretty typical of Honda. Coming from a company with such a great reputation, however, there were aspects of the XX that we felt were disappointing. Fortunately, there are a few simple things you can do to improve the 700XX and unleash the performance it promises. Read on, and we’ll tell you how to turn your 700XX into a well-rounded ATV that is much easier and more enjoyable to ride in tighter, rougher conditions, and on the open trail. 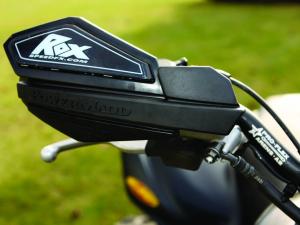 The 700XX’s biggest problem is its weight. At 505lbs, it is 107lbs more than its closest competitor, and the extra weight is the root of this Honda’s handling and suspension problems. No reasonable amount of money is going to magically shave over 100lbs from the XX, so we had to work on other areas that would help overcome its additional heft.

From day one, we thought the XX’s cornering ability was sub-par. We were told that the key to making the big Honda turn more precisely was to shift more of your weight to the front of the ATV. This puts more pressure on the front tires and less on the rear, which stay very firmly planted courtesy of the independent rear suspension. As we discovered, shifting your weight far forward does help. The problem is that, while being comfortable for sitting and riding in a straight line, the handlebar bend and positioning make it very tough and extremely tiring to put your body weight any farther forward. To help with this problem, we installed a set of Arens Pro-Flex, “fat” handlebars on a two-inch, pivoting riser from ROX Speed FX. The handlebars are much more firm than the OEM handlebars and have a more comfortable bend for aggressive riding. The pivoting riser from ROX clamps right into your stock mounts and allows you to fine tune both forward and back positioning of the handlebars as well as allowing you to roll the bars in the upper mount. Turning the riser so that the centerline of the handlebars was forward of their original position allowed us to comfortably shift our weight more towards the front of the ATV, which helps the front tires find enough traction to steer the big Honda. We finished off our new handlebar setup with a set of ROX hand guards and billet aluminum mounts to keep our grippers shielded from branches and flying debris. 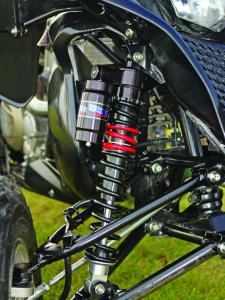 Moving our weight farther forward helped a lot with the under-steer problem, but it also brought another problem into light. The 700XX’s suspension gives a nice plush ride--to a point. While the rear suspension is equipped with piggyback reservoir shocks, the front shocks are sealed, monotube shocks with limited oil volume. Sliding our weight farther forward on the ATV over-worked the front shocks and they quickly faded into pogo sticks. Since neither the front or rear OEM shocks have adjustments other than spring preload, we felt that a good set of aftermarket shocks was in order. We called on Works Performance to handle our suspension needs, and they set us up with a set of fully adjustable, triple rate piggyback shocks for the front and rear. At first, the shocks felt way too stiff and we had the compression turned down as far as it would go. As we rode more miles, however, the shocks began to break-in, and in a relatively short time, we were able to fine tune the suspension to the point that it delivered a more plush ride overall, with much more ability to soak up choppy bumps. If airtime is your thing, you’ll quickly find out that the OEM shocks just don’t have what it takes to keep the 505 pound XX from bottoming. The Works Performance shocks, on the other hand, handled everything we could throw at them, and the performance remained fade-free and provided much better suspension action for the entire ride. 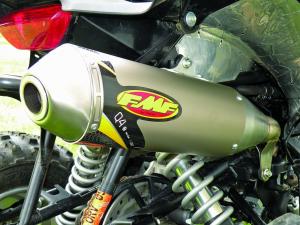 The fuel injected 686cc Honda puts out plenty of useable power for pretty much any condition you’ll ever care to encounter. With nearly 700cc’s under the seat, we wanted to see if we could wake up the Honda power plant just a little bit more to see what it really had. However, excessive noise is becoming an issue in more and more areas, and we want to do our part to keep tracks and trails open. We called FMF with our needs and they recommended their stainless steel, Power Bomb header combined with their Q4 S/A muffler. The FMF system uses a much larger diameter pipe for maximized flow, and the Q4 slip-on muffler does an excellent job at keeping the sound under control. The Q4 is advertised as 96db compliant and we believe it! In fact, the FMF system is barely louder than stock, but delivers a high performance rumble that will make any horsepower nut happy. Judging by our seat-of-the-pants dyno, the FMF exhaust increases the 700XX’s power throughout the entire range. The most noticeable differences, though, were better torque and response off idle and increased pull at high RPM, well past where the stock exhaust stopped making power. Another thing we really liked about the FMF exhaust was that it fit incredibly well. Every bolt lined up perfectly without the use of hammers, grinders, drills, or excessive force and/or cursing! For a balance of performance, non-offensive sound, looks, and fit, it’s hard to find a better exhaust system than the FMF.

While our modifications didn’t turn the 700XX into a fire breathing, land rocket capable of matching a 450’s agility in the woods, they did turn it into an ATV that our test riders enjoyed more and preferred over the basic model. For long trail rides, it is even the quad of choice for some, and they don’t want to give it back! In stock form, the 700XX reminded us of the somewhat awkward, unpopular kid who was picked last for kickball. Our modified 700XX is much more responsive, with increased handling and suspension performance, and it takes less rider input. Now it’s a player that most people would be happy to have as part of their team.