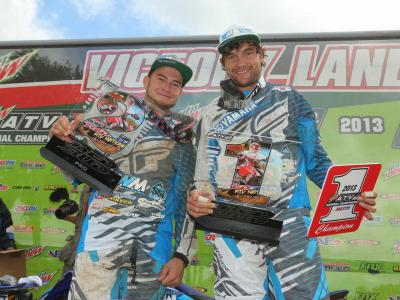 “Consistency was key starting from my YFZ450R running amazing all year long helping me get great starts and having zero mechanical failures to secure back-to-back Championships,” Wienen said.  “Working hard and never giving up helped me get where I am at today.  I never would have thought two years ago I would come back from a season-ending back injury and win back-to-back titles.  It feels surreal right now but will sink in someday.  Now to the season finale and on to working towards a three-peat!”

“Chad’s back-to-back championships are a true reflection of the passion, talent and effort he puts into ATV racing,” said Steve Nessl, Yamaha’s ATV/SxS marketing manager. “The Yamaha Race team congratulates Chad and the entire Wienen Motorsports team for their accomplishments and for putting the YFZ450R on top of the podium all year.”

Wienen and his YFZ450R go into the final round with eight first place finishes and nine straight podiums for a total of 410 points.  Yamaha’s Thomas Brown has been a strong contender all year with an impressive seven podium finishes that have helped him hold a steady second place overall.

“Yamaha is extremely proud and excited about Thomas’ success,” Nessl said.  “Thomas has been with Yamaha Racing for many years, and he’s always been a fierce competitor.  He’s putting together a great season, and it’s exciting to watch him and Chad battle it out and come out on top of the entire field.”

Yamaha Racing continues to lead the sport ATV market in sales, championships and support. This year has seen extended trackside support for all ATV racers at each stop of the AMA ATV nationals.  Layne Barnes and Pro Motorsports from Mt. Pleasant, Iowa, have been supporting all of the events on behalf of Yamaha stocking replacement parts and providing technical assistance to riders on race days. Yamaha, the number one brand in sport ATVs, also supports racers in the Grand National Cross Country series, World Off-Road Championship Series and Yamaha Quad-X Series.  Follow more Yamaha racing at www.facebook.com/yamahamotorusa and www.twitter.com/yamahaatvracing