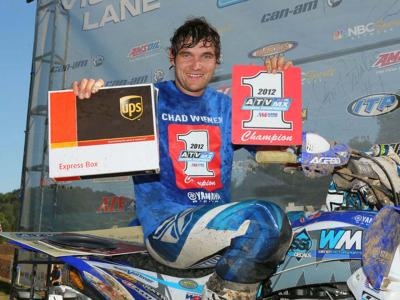 Racing a Yamaha YFZ450R for his Wienen Motorsports team this year, Wienen put together a smart pair of 3-4 moto finishes on August 11 to claim the historic championship with a 31-point advantage over his nearest rival. In all, Wienen took six wins and 10 straight podiums in his first season racing for Yamaha.

“After my injury last season, I was determined to make some major changes to my program and come back stronger than ever,” Wienen said.  “With the support of Yamaha and the YFZ450R, Wienen Motorsports had the complete package to take the 2012 championship.  The YFZ450R was bullet proof, and this was my first pro season with zero DNFs.  We never missed the podium taking six wins, three second places and one third on our way to the Championship!”

“Chad and his Ryan Cox-prepared YFZ450R have added their names to the Yamaha history books by winning the most prestigious championship in ATV MX racing,” said Donnie Luce, Yamaha’s ATV racing coordinator. “This is a great championship for Chad, the entire Wienen Motorsports team and Yamaha Racing.”

Brown, a five-year Yamaha rider, grabbed 5-3 moto results on the weekend to claim fifth in the 2012 overall season standings.  Brown and Wienen have secured their place as a threatening pair in AMA ATV racing through countless hours of team training and winning performances on their YFZ450Rs.

“Yamaha congratulates Thomas Brown on another great season,” Luce said.  “Brown has been a solid competitor consistently riding his YFZ450R to podium finishes in 2012 and was a key reason Yamaha captured the AMA ATV Manufacturer’s title.”