What Did We Think?
Written By:
Cory Weller 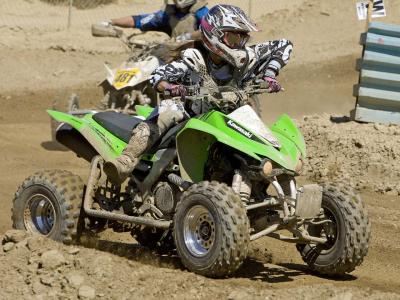 “What do you think about racing a stock Kawi, Corry?” These were the words that began my little journey to Glen Helen, CA for round seven of the WORCS series, in order to race in Kawasaki’s own media class; a class which would allow us “editor types” to get a taste of what the 2010 Kawasaki KFX450R has to offer in stock trim.

Upon arriving at the track, the members of the media who would be racing this event were greeted with a terrific, professional looking spread from Kawasaki – complete with huge semi truck and trailer, a canopy the size of a small warehouse, and a number of perfectly clean, perfectly stock 450 sport machines.

After a quick introduction by Kawasaki Motor Corp’s Public Relations Supervisor, Russ Brenan, we were assigned our very own KFX450R and given the opportunity to take pictures, adjust our controls (if we chose to do so), and otherwise get acquainted with our future race machine. 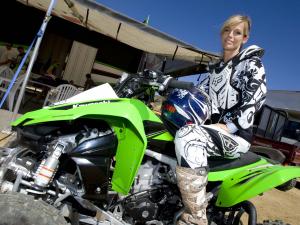 One of the first things that I tend to notice on any machine that I work with is fit and finish. Initial quality speaks volumes to me, and Kawasaki did a great job of producing a machine that not only looks great, but is put together very well.

The 2010 KFX 450R comes in two different color schemes – Kawasaki’s trademark Lime Green, as well as Bright White, for those who wish to stand out a little more in a crowd.

The most noticeable feature of the KFX could arguably be its aluminum, double cradle race frame, giving the Kawi a truly competitive look as well as allowing the motor to sit as low as possible in the chassis, while lightening up the frame considerably. The narrow front frame allows for longer lower a-arms, which in turns allows for better handling front suspension and maximum shock travel.

The body panels fit flush against each other and the frame, the plastics are made of high quality material and very glossy, and the fenders feature easily removable pieces that can be taken off (or left on) for racing purposes. The folks at Kawasaki also made sure that each of our media units was fitted with some great looking nerf bars for our safety, as well as tether-style kill switches.

The controls are placed well and securely mounted on a set of Renthal fat bars that come standard with every KFX, and wait – what’s this? A reverse lever? Kawasaki integrates a light-weight reverse gear with their 5-speed transmission, offering racers the luxury of getting out of a tight spot without having to dismount and heft a heavy quad around. 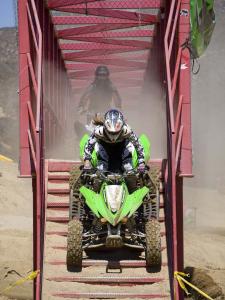 I was pleasantly surprised by how well the KFX fit me as soon as I sat on the wide, comfortable seat, and placed my feet on the huge, race inspired foot pegs. Ergonomically, Kawasaki did their homework, and I was happy to know that my race would be easier as I wouldn’t have to take much time to get used to this new machine!

The levers were easy to work with and were placed well on the bars and, at 5’10”, I was quite comfortable either sitting or standing, and it didn’t take much effort to make the transitions back and forth, either. This is important when racing, since an active rider will switch riding stances constantly throughout a race, and the easier it is, the more energy is saves for the rider.

Sitting on the starting line at Glen Helen, the media class waited for the inevitable gate drop, signaling the beginning of our 50 minute, grueling race. Glen Helen is always rough, and in the summer it can also be pretty darn hot – combine a rough track with a long race and un-seasonably hot temperatures, and you have yourself one challenging race! Throw in a stock quad, and the challenge doubles! However, what better way to test the KFX than to really put it through its paces?

As the gate dropped, the class surged forward – all except for me, who suddenly forgot how to shift properly and dropped into false neutral right off the starting line. Making up time through Talladega (Glen Helen’s long, sweeping first turn), I started up the next steep hill right on everyone’s tail.

The suspension on the Kawi soaked up most of the ruts and braking bumps that I encountered initially, but as the race progressed, some of the rougher whoops and holes would take their toll on my grip, and several times the bars were ripped out of my hands when my front wheels dropped into some nasty holes. The wide, grippy foot pegs helped to keep me seated whenever this happened, however, and I was able to recover without incident each time. 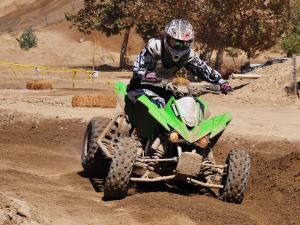 The people at WORCS decided to make the infield a bit more interesting for everyone, and routed the course to go up the stairs, over the foot bridge that spanned the bottom of Mt. St. Helens, and back down the stairs and onto the track again. This proved to be quite a challenge for many riders who had never ridden up a steep set of stairs before, but the KFX had no problems with traction or clearance – the biggest challenge I had was to resist the urge to jump too high up onto the bridge – one small turn of the bars to either side, and there would be some wall-climbing!

Jumping the KFX was easy and the Kawasaki felt well-balanced well in the air, but I wasn’t getting too aggressive on the bigger jumps since my rear suspension had a slight tendency to kick up. Turning was light and very responsive – sometimes almost too much so, and I found myself on two wheels several times in the deep, rutted corners.

While the KFX felt well balanced and had a good stance, it wasn’t as wide as some of the other quads I had tested, and I felt like I sat taller on the machine. If I were to race a KFX competitively, I would probably want to widen and lower it a bit more. The clearance was great, however – and sometimes on courses like the WORCS courses, having good clearance is ultra important.

The tires provided plenty of traction, and the seat was comfortable throughout my 50 minute wrestling match with Glen Helen, but the heat and the rough track took it’s toll on me, and I lost a couple of positions as I pulled off to the side to put my head down and get rid of some dizziness towards the final lap.

Knowing the white flag was out, I found whatever energy was left in me and kept my mind focused on finishing. My KFX was running great, and I couldn’t even tell it had been put through the things I had put it through – it certainly faired better than I did that day! That checkered flag looked better than anything I could have imagined by the time I came around to the finish line for the last time, and I wound up with a fourth place finish in the media class - not too shabby! 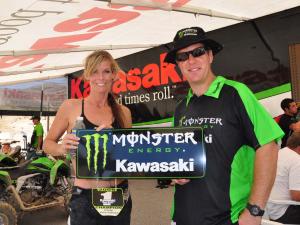 The KFX450R proved to be a fun and competitive machine. Kawasaki’s fit and finish is excellent, and it is obvious they put a lot of thought into how the KFX is put together. The motor, while not a rocket ship in stock form, pulled strong throughout the power band and handled the steep hills of Glen Helen with ease – its obvious there is plenty of hidden power to be had with just some regular mods, and I look forward to the opportunity to throw a leg over a fully modified KFX450R someday!