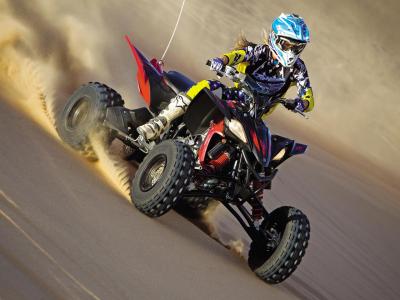 There are, quite possible, many times in an editor’s daily duties, when one might pause in the midst of various editorial activities, look around at their surroundings and breathe a deep sigh, thinking to oneself “How did I ever get so lucky to have been given this job?”

As I stood just outside the ring of Camping World supplied toy haulers circled neatly at Pad 2 in Glamis, CA just before sunset, I had that very thought. After all, here I was back in the dunes, and back at one of my favorite media events of the year – Yamaha’s press intro for their new 2011 Special Edition sport ATV models. Yamaha has been hosting this event longer than I have been an editor (over 6 years), and I have been fortunate enough to make most of these trips since I began writing professionally.

When you combine having all of the dunes surrounding Glamis, CA practically to yourself (mid-week trips are the best!) with great media friends, and throw in as much riding as you can stand on some of the best handling, fastest sport quads in the business, you have yourself an annual event that no editor wants to miss. Add in great weather, state of the art accommodations, horseshoe tournaments with awesome prizes, and fully catered (delicious!) meals, and it’s a wonder that even more editors don’t try to sneak in under the cover of night.

While this event is a lot of fun, there is a very important purpose to it – and that is to introduce us to the newest Special Edition Yamaha 2011 Raptor 700 and YFZ450R models. As always, work comes before play, so let’s get familiar with these newest machines before we throw our gear on and disappear over the sandy horizon! 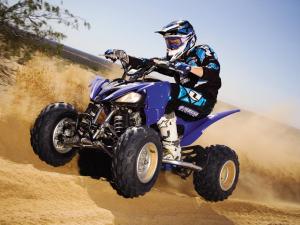 The most obvious difference between the standard 2011 model and the Special Edition is the great looking color scheme and graphics. It’s always fun to see what Yamaha comes up with, year after year – they almost always come up with something that is a real eye-catcher, and this year’s model would be no exception.

Utilizing the same black metallic plastics that we have seen (and liked) on previous models, this time around they are paired up with a fiery red rear fender section that is tied in nicely with the use of some wicked looking graphics and contrasting red shock springs. The overall impression when looking at the whole package is one of stealthy aggression, and to be grammatically incorrect – “me likey”!

Perhaps it’s because as soon as I bought my very first YFZ450, I swapped out the stock white plastics for the SE edition black ones and added red shrouds? Maybe it’s because I’m always drawn to any kind of dark, menacing-looking machine with four wheels and a motor – regardless, I instantly liked how this model looked!
The frame and swing arm, wheels, factory heel guards and newly designed dealer-installed front bumper are also black, lending to this machine’s dark aura, while the quick-release tabs on the plastics ensure that accessing anything under them on the YFZR can be done with ease. 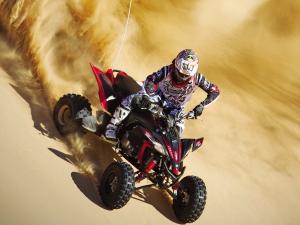 The SE model continues to be powered by Yamaha’s 449cc engine, utilizing it’s proven titanium five-valve cylinder head technology and offering abundant low to midrange torque while still maintaining a very strong top end, power that we used thoroughly in the three days we spent at this event. Helping to put that power to the ground are 20” Dunlop tires in the rear, with 21” tires up front, coupled with Yamaha’s aluminum wheels designed with a rolled inner lip for added rigidity. The Dunlop tread has proven to be aggressive and effective in the dirt, and even works surprisingly well at hooking up in the loose sand of the Glamis dunes.

The Pro Taper bars are a nice touch, and the extra wide, super grippy foot-pegs definitely help keep ones feet planted, even under more aggressive riding situations. Pair all of this with the YFZ450R’s excellent, fully adjustable stock suspension, and you have yourself a terrific track, trail or dune machine. While we think the R is most at home on the motocross track, its second home could easily be considered the dunes.

Given my admitted pension for darker themed machines, it’s no wonder I also think that Yamaha did a great job designing the SE Raptor for 2011. Black, black and more black – I love it! For this model, rather than use a bright contrasting color to set off the acres of black plastics and frame, Yamaha chose a more subdued silver accent in the seat trim area as well as in the lightning-inspired graphics. Silver shock springs complete the color scheme and give just enough contrast in the front end to keep the black from being too overwhelming. 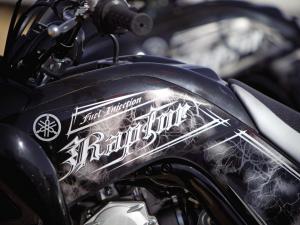 The SE Raptor 700, like the YFZR, comes to the public complete with a newly designed front bumper as well as black heel guards that sport a monogrammed ‘R’ cut into the back as a nice personal touch. In addition, the SE 700 also comes with a wave-style disc rotor, matching the more expensive, aftermarket styles that are currently popular in the sport crowd.

That kind of stopping power is important when you are riding a quad powered by the Raptor’s beefy 686cc fuel-injected engine, which makes the Raptor the most powerful Yamaha sport ATV being made. With tons of torque pretty much straight off of idle, there is plenty of power to be had anywhere you happen to stab the throttle in the power band.

The piggy-back shocks are fully adjustable (just like the YFZR’s) and with 9.1” of travel up front and 10.1” in the rear, the Raptor 700 can take on even the most challenging courses without losing its composure. Complementing the easy-handling suspension is a very comfortable seat that is perfect for longer, leisurely rides. 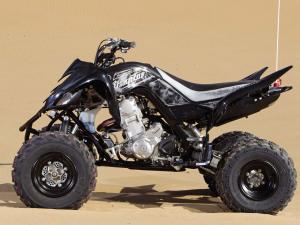 I am a motocross girl. I like the sporty, low and wide YFZR for pretty much any type of riding that I do, including duning – because that’s the machine I’m the most familiar with. During previous Yamaha dune events, I have always managed to sneak off with a YFZR and let the others enjoy themselves on the Raptor 700’s. I mean, sure….I’ve taken the Raptor out for a lot of photo-shoots, and even for some shorter rides around camp for review and testing purposes, but when it came down to choosing a quad to do the long, fast rides on – I’ve always gone for my trusty YFZR steed. It’s that dang competitive nature in me, I guess.

Well, for once, I decided to suck it up and step out of my comfort zone on this trip. It was time for me to be a big girl, and see just how good of a rider I actually was in the dunes by tackling the “beast” for our long, fast ride to China Wall (which was quite the trip from our campsite).

I’ve always like the Raptor. Even though I used to tease my now-husband mercilessly when I first met him and he was racing a Raptor (I was a Honda girl back then), I’ve always considered it a fantastic all-around machine with gobs of torque. When Yamaha improved the chassis several years ago and added the gauges and better suspension, an already great quad became even better. It’s very easy to recommend a Raptor to anyone looking for a solid handling, super powerful, very capable sport quad – as a matter of fact, I voted it my favorite big bore in a magazine shootout I participated in several years ago. It just does everything well.

As I got situated on my new torquey ride, I contemplated moving to the back of the line of editors and Yamaha staff, just so I wouldn’t hold anyone up as I got comfortable on the 700 thumper. Nah. Being in the back is no fun! 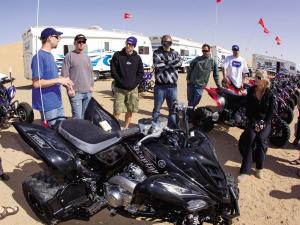 It took all of two minutes for me to forget I was riding a quad I had subsequently avoided choosing for years in the dunes. The Raptor felt awesome in the air and the suspension handled the tight turns and twists we were taking through the dune crests like a champ. I forgot the Raptor isn’t as wide as the YFZR quickly, and enjoyed feeling the torque and seemingly endless bottom-end handle even the steepest hills.

I ride standing up most of the time (a motocross thing, I guess), and the ergonomics of the Raptor fit my riding style just fine. It was a shame I stood so much, though – because the seat on the Raptor is extremely comfortable and easy to move around on. Not ‘Banshee cushy’, but softer than the YFZ450 that I had ridden for years.

I had no problems keeping up with even the fastest riders in the group, and that fact reminded me once again just how badass the Raptor 700 is. And this was a bone-stock machine – throw on a pipe, intake and some paddle tires (or not) and it’s no wonder the Raptor is considered king of the dunes.

Ladies, don’t let the guys have all the fun on this machine……if you are looking for an awesome quad to ride in the dunes, on the trails or in the desert, I urge you to add the Raptor 700 to your list of options! It’s got all the power you need on tap, but you don’t have to use it until you are ready for it – and when you are, it’s there in abundance.

As always, the folks at Yamaha treated us like kings (and a queen), and made sure we had as much time as we wanted on their newest models. They even brought out some of the highly popular Raptor 250’s for some short-course mobbing whenever there was down time at camp. Play-racing the little Raptors was a big hit last year, and I could see everyone’s eyes light up at the sight of them lined up against the trailer. Yes, there would be some shenanigans on the two-fiddies once more!

For several days we learned firsthand about the newest models, took plenty of pictures, and got so much riding in that it actually hurt to sit down for the drive home. We met some new friends, caught up with a lot of old ones, and accumulated enough sand in our gear to create our own small dune habitat in our driveway at home. Most of all, we had an opportunity to re-acquaint ourselves with two of the most popular sport quads in the industry – reminding us all why Yamaha remains steadfast at the top of the OEM food chain.