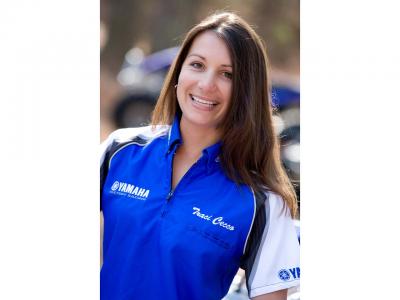 “This ninth championship is very special to me and by far will be the most memorable -- it is going to be my last championship,” Traci said.  “I am retiring from chasing championships.  With nine titles, my health, friends and memories for a lifetime, I finally feel this is the right time for me.”

Traci may be retiring from the track, but that doesn’t mean she’s leaving racing entirely.  “I will continue to be at all of the GNCC events supporting my husband and his racing career,” she said.  “Racing is a tremendous part of my life, and I will truly miss competing, but it’s time for me to be part of the sport I love in a different way -- whether that be representing longtime sponsors at the track, working the gas can in the pits, or mentoring new lady racers.”  To all of the up-and-coming women racers out there, she says: “Never quit setting achievable goals, and always act like a lady.”

Cecco clinched her historic championship at the last GNCC round October 6 in St. Clairsville, Ohio, allowing her to enjoy the Ironman knowing her championship is already in the books.  Known as the best woman racer in the history of the sport, Cecco captured six wins and was on the podium at every series stop this year leading up to Crawfordsville.

“Yamaha congratulates Traci on another championship season and reaching the historic milestone of winning nine championships throughout her career,” said Donnie Luce, Yamaha’s ATV racing coordinator.  “Traci has been an inspiration, a role model, and a champion of the sport throughout her career.  She’s broken barriers for women in racing, and she’s proven that she is one of the best riders ever in any class or category.  She’s a true champion and ambassador for our sport, and Yamaha is extremely proud to have been so closely involved in her successful career.”

Yamaha rolled a big rig into Crawfordsville for the weekend displaying new ATV models, including the 2013 Raptor 700R that is now assembled in the U.S.A.  Yamaha will continue to have special giveaway items for fans throughout the weekend and display a large racer appreciation banner to solute competitors who rode blue throughout the season.  Cecco’s announcement was capped by a special autograph signing session at the Yamaha truck including all of Yamaha’s top riders.

In the men’s XC-1 Pro series, Yamaha/Ballance Racing riders Walker Fowler and Taylor Kiser came into the Ironman ranked second and third respectively.  Their consistency this year, including 12 combined podium finishes, has kept them in the top three this season.

“Yamaha congratulates our entire GNCC ATV racing team for their efforts this year,” said Luce.  “Walker and Taylor have had very strong seasons and stayed near the top of the podium all year.  We’re excited to see them finish the season strong and know they will be going for wins in these last couple of events.”

Traci turned pro in 1999 and won her first Women’s title in 2000.  Since then, she has finished in the top three every year capturing an unprecedented nine overall titles, four second places and one third.  Her career has given her international recognition as a top ATV racer, and Moves magazine named her one of its “Power Woman” in 2010 -- an award that honors “25 influential and successful women in various fields.”  Among her many career highlights, she remembers “Signing my first Yamaha Racing contract in 2006, being the first woman to win a morning ATV overall race, working with young riders at GNCC University, and traveling the country to promote women in racing,” as some of her favorites.

“Thank you to my loving husband for building championship bikes and for being so supportive in my decision to retire,” she said.  “To my Yamaha family, thank you for making my dreams come true.  Thanks to my longtime sponsors for always believing in me: GYTR, Maxxis, Hiper, Powermadd, HMF, Scott, GT Thunder, Yamalube, Works Connection, Ballance Racing, Fly Racing, Precision, Wiseco, DP Brakes and Tireballs.  And also to my newer sponsors: Rekluse, Quadtech, G4 and Big Nutz Racing.  Thanks to the greatest pit crew ever: Johnny Gallagher, Jim Wise, Stoney Livengood and Todd Moskala.  A huge thank you to my mom and family for putting up with my crazy passion of racing, and a shout out to ATVRiders.com, Quadzone, and X-Country photos for making us all famous.  And thanks especially to my fans and my GNCC family for all the hugs and love through the years!  I couldn't have achieved any of this without each and every one of you!”