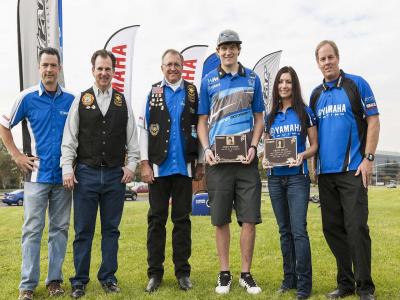 CYPRESS, Calif. – November 16, 2012 – Yamaha ATV Racing has captured 2012 season championships in motocross and cross-country, from North America to the Southern Hemisphere, all aboard the world’s most high-performance, race-dominating ATV, the YFZ450R.

Yamaha employees gathered outside of the company’s U.S. headquarters in Southern California today to celebrate their champions and make their annual Feed the Children food drop along with the Star Touring and Riding® Association.  This year Yamaha helped raise more than $27,000 through employee donations and corporate fund raising efforts that will provide food and essentials for approximately 2,000 families across the country through next year.  Today’s food drop will support 400 families in Garden Grove, Calif.

Among the champions in attendance for the Yamaha celebration and food drop were Chad Wienen and Traci Cecco-Pickens.

Chad Wienen joined Yamaha Racing just this season and raced his YFZ450R to his first ever AMA Pro Championship.  He dominated the Pro class taking six wins and 10 straight podiums before locking in his first ever season championship in August.  Thomas Brown, a Yamaha racing veteran of five years, took an impressive fifth place overall in the Pro series helping to secure the coveted AMA ATV Manufacture’s Title for Yamaha.

Following the 2012 AMA season, Wienen and Brown drove north to take the top two spots at the 2012 Montreal Supermotocross in Quebec in September.  Wienen topped the podium and Brown finished second -- both aboard their YFZ450Rs -- in what became one of North America’s most competitive races this year in front of an estimate crowd of 40,000 fans.

In Grand National Cross Country (GNCC) action, Yamaha’s Walker Fowler and Taylor Kiser battled the field consistently aboard their YFZ450Rs landing second and third XC-1 Pro class finishes respectively with 14 combined podiums.  Yamaha’s Traci Cecco-Pickens captured her historic ninth Women’s class championship a full two races before the season ended.  Known as the winningest woman in GNCC ATV racing history, Traci announced her retirement at the Ironman GNCC event October 20.  In her final season, she secured her place among the best cross country racers of all time finishing atop the podium in every race this year including seven wins.

Longtime Yamaha rider Dustin Nelson and his Nelson Racing team member Josh Row were joined by Travis Dillon and D.J. Noerr to make a winning foursome in the Baja 500 Open Pro 450 class aboard their YFZ450R this June. The Baja 500 is a world famous event and one of the toughest tests of any racer or machine.  This accomplishment was all the more impressive for Nelson coming in the middle of his QuadX Series season. Nelson, who holds a record five QuadX Series titles, battled for the 2012 championship all the way to the final moto ultimately landing second this year.

Yamaha has worked with Feed the Children for more than 10 years raising several hundred thousand dollars and feeding tens of thousands of children.  This is the sixth year Yamaha employees and Star Touring members made the ride from Yamaha to the local Feed the Children office to drop off donated supplies.  Feed the Children is an international and nonprofit relief organization that delivers food, medicine, clothing and other necessities to individuals, children and families who lack those essentials.