Yamaha Employees Give Back to the Forest

Preserving Our Riding Areas in 2010
Written By:
Corry Weller 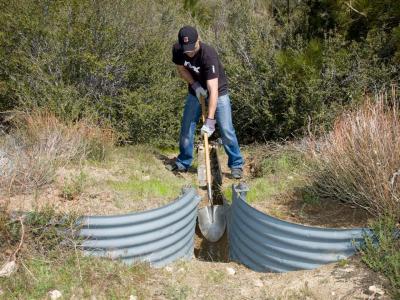 Yamaha has never been a company to sit on their laurels when it comes to being involved in the very things that ensure the motorsports industry will have a continued and stable future. After a very successful event in 2009, the employees at Yamaha Motor Corp, based in Cypress, CA, once again came together with volunteers and officials from the San Bernardino National Forest (SBNF) to do their part in helping to preserve the riding areas in this very popular recreation area just north of Los Angeles.

The SBNF is a playground to over 23 million Southern Californians, and there are over 15 million people who recreate annually in these beautiful forests located a couple of hours from Orange County. For the second year in a row, almost 100 volunteers spent their weekend involved in two separate, but equally important efforts spearheaded by Yamaha and USFS/SBNF volunteers.

Yamaha’s OHV Access Initiative program was developed as a proactive, grassroots effort that is currently supported by Yamaha dealers and their customers nationwide. This program focuses on promoting safe, responsible riding and sustainable, open riding areas. 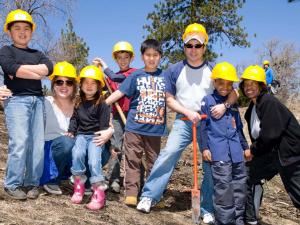 Throughout the development of their program, Yamaha has forged a strong partnership with the SBNF and the USFS (United State Forest Service), which has resulted in Yamaha not only participating in a variety of cleanups and other projects, but also adopting miles of trails and various staging area projects in the San Bernardino National Forest, as well.

Members of the media were invited to come out and experience, first hand, exactly what is involved in a program like this – a job that many of us had taken on the previous year, and were looking forward to participating in once again. Under the tutelage of SBNF volunteers, we spent an entire day clearing trails that had grown over, cleaning up adopted staging areas as well as ensuring that no new, un-approved trails were allowed to develop. Working together, SBNF volunteers and Yamaha employees armed themselves with clippers, shovels, rakes and assorted tools, as different groups tackled a list of projects that the SBNF had put on their “wish list” for this event.

As we worked throughout the day, it became quite obvious to us that the forest service volunteers are passionate about what they do, and it’s also apparent that they appreciate Yamaha’s dedication and involvement in preserving their public lands. Many heartfelt thanks were given throughout the weekend with a final thank you resulting in an award presented to Mike Martinez, Yamaha’s GM of ATV & SxS Operations, in appreciation for Yamaha’s help throughout the past several years. 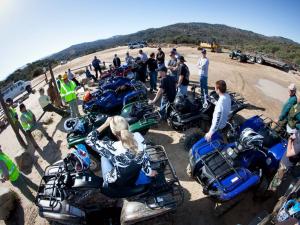 After a very successful event in 2009, Yamaha employees and families were once again invited to participate in the efforts to replant many of the burned out areas in the San Bernardino National Forest – this year, the efforts would be focused on the forest areas located near the popular vacation destination of Big Bear Lake.

After receiving a crash course on proper seedling planting methods, groups of volunteers headed out across the pre-marked areas, armed with the proper tools for planting the tender seedlings that were now in their care. Planting efforts were widely dispersed around the area near the Big Bear Discovery Center, and small groups of families and co-workers could be seen scoping out planting sites over the charred hillsides in every direction. Volunteers of all ages and sizes were busy getting their hands dirty and doing their best to space their seedlings out effectively between the skeletal remains of what was once a beautiful forest.

Returning to partner up with the tree planting efforts were members of the TreePeople, a Los Angeles based environmental non-profit group that has dedicated countless man-hours to re-planting burnt areas throughout the forests and educating volunteers on the process. With combined efforts from the Tree People, SBNF volunteers and almost 100 Yamaha employees and family members, a total of 2250 new seedlings were planted in one day, almost doubling Yamaha’s record breaking numbers from the previous year! 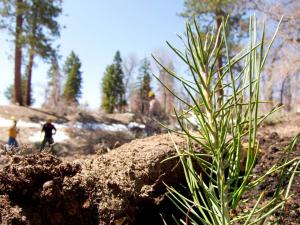 Any rider or motorsports enthusiast can help keep their public riding areas open in their own area by riding responsibly and escalating their participation in their home state by taking advantage of Yamaha’s OHV Access Initiative program, which is outlined on Yamaha’s website at www.yamaha-motor.com. By determining the particular needs in local riding areas and coming up with a well thought out plan to fill those needs, enthusiasts can take advantage of Yamaha’s funding to help improve and sustain their own riding areas.

In addition to developing and initiating a local program, every rider can do their part to contribute to the preservation of our riding areas on a regular basis by simply following the guidelines below, which have been suggested by Yamaha Motor Corp.