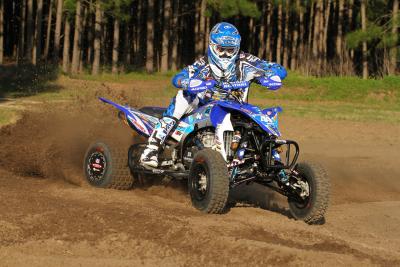 Thomas Brown, who finished a strong fourth in the national MX series last year, is back and motivated to climb the podium in 2012. Chad Wienen, a veteran AMA ATV pro and multi event winner, has joined Team Yamaha this year and is excited about his new ride and the opportunity to put another YFZ450R on the podium.

In advance of the national opener this coming weekend, Brown and Wienen discussed how they have been preparing, what the team expansion means, and what they expect this weekend …

Q: So, first, how do you feel about the team expansion this year? You guys have competed in the past. Are you buddies now that you’re both on blue?

Thomas Brown: I’m pumped to be seeing more blue out there. We have been friends for awhile and it’s still that way. It will be awesome to cover the top two spots on the box in blue. I’m just gonna have to be the one on top!

Chad Wienen: It’s great to see Yamaha pushing forward with the sport and putting in so much support. Thomas and I have always been great friends. We’ve always competed against each other, but now we are riding the same brand.

Q: What have you been up to in the off-season? How do you train to stay in shape and maintain the sharp focus necessary for the highest level of ATV MX?

Thomas Brown: Well, this off-season has been way slower than normal. I left for Florida right after Thanksgiving. Things were going good, I was getting some good seat time and had an awesome gym program going. That all went away quickly. I was riding and over jumped a jump to the flats. When I landed, I felt something pop in my ankle. Turned out I had torn my tendon in my right ankle. I got surgery later that week and it was off to the couch. I was able to keep up with some upper body work outs.

Chad Wienen: T.O.P. Performance Training along with just enough riding on the machine and having fun.

Q: You’ve both been recovering from injuries leading up to the season opener. How are you feeling, and are you ready for the gate to drop March 24?

Thomas Brown: Recovery has been going great. I won’t be 100% for the first race but I’ll be good enough to go out and compete. I’ll have been riding for just about a week when we get to the first race.

Chad Wienen: I feel great. I’ve been on the machine for a little over three months, and I am excited for the season to start so I can get back to racing.

Q: How’s the YFZ450R working for you in practice this season?

Thomas Brown: The YFZ450R has been working great. Before I got hurt, it was feeling great. I know we have made some positive improvements since then, and I’m ready to show them off.

Chad Wienen: Working great. We have been making great progress on our set up, but it has been so great that I’ve been able to ride the machine every day and do proper maintenance to the machine and it just keeps on running.

Q: What will be your biggest challenge in the AMA ATV MX series this year?

Thomas Brown: I think my biggest challenge is going be getting through this first race and making as many points as possible.

Chad Wienen: Being consistent, having good starts, and getting on the podium.

Q: The schedule has changed a bit this year including a night race at Ballance MX and a stop at High Point Raceway. Any thoughts or opinions? Do you like night races?

Thomas Brown: I’m super pumped about the Ballance night race. It could be huge. I’m bummed to see Steel City traded for High Point. I really like Steel City, but we’ll see what High Point has to offer.

Chad Wienen: I think it will be good for the sport to have a night race. I grew up racing at night, so I will be comfortable with it.

Q: What’s your favorite track and why?

Thomas Brown: It would either be Steel City or Red Bud. Steel City, because normally it’s a more technical track and you have to be able to go fast. Red Bud, because it has a great lay out and gets super rough!

Q: Take a look at the field -- who’s your biggest competition?

Thomas Brown: I’m going say Wienen. He is coming back with something to prove, and we know his bike is going be good. But the field is deep. I know Joel Hetrick and Josh Upperman are going to be super fast.

Chad Wienen: The beginning of the season is always interesting, because you can see who put all of the hard work and dedication into riding and training in the off season. Whoever has done that will always be the biggest competition.

Q: You guys are focused on the national motocross scene all season. Do you ever just want to go mudding or ride cross country in the off season?

Thomas Brown: After our season is done, I like to do some woods racing and take the Grizzly mudding with friends. More than anything though, I like to break out my YZ250F and turn some motos.

Chad Wienen: Not really, but every once in a while you may see me in the woods just out having fun.

Q: What advice do you have for new racers or people just considering racing?

Thomas Brown: Get a YFZ450R! After that go out there and have fun.

Chad Wienen: If you put enough hard work and dedication into anything, you will see the results you want.

Q: Any predictions for this season?