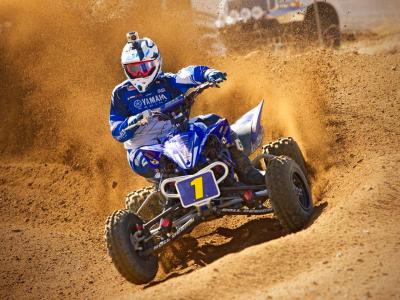 CYPRESS, Calif. – January 12, 2012 – Yamaha Motor Corp., U.S.A., has launched a first-of-its-kind promotion with GoPro, the world’s most versatile camera, to give away free HD HERO2 Motorsports Edition cameras to Yamaha ATV customers in the first half of 2012.

Through the unique promotion, anyone who buys a 400cc and above Yamaha ATV* by the end of May will receive a free GoPro HD HERO2 (a $299 value) from Yamaha. Full details are on Yamaha’s website: http://tinyurl.com/Yamaha-GoPro

“Yamaha is excited to offer a free HD HERO2 camera to ATV customers in 2012 through this new promotion with GoPro,” said Steve Nessl, Yamaha’s ATV/SxS group marketing manager. “We’ve used the HERO cameras on motocross tracks, on trail rides, in the sand dunes and even when out hunting. It’s a great camera, and we expect this will be an exciting offer for motorsports and outdoor enthusiasts alike.”

The HD HERO2 camera can be worn or mounted on just about anything utilizing GoPro’s numerous mounts and accessories. This versatility matches well with Yamaha’s wide ranging ATVs, from the highest-performance sports ATVs to the most durable and off-road capable utility 4x4 models.

Yamaha’s Dustin Nelson wore a GoPro camera while racing his YFZ450R to a record fifth championship in the 2011 motocross season (http://www.youtube.com/user/quadXracing?feature=watch), and Yamaha’s Whitetail Diaries (http://www.whitetaildiaries.com/episodes.html) hunting show on NBC Sports mounts the cameras to the best selling** big bore utility Grizzly 700 with EPS to capture dramatic action in the field.

“The versatility of the HERO cameras, and the quality that the GoPro brand represents, make this a great fit for Yamaha’s ATV customers,” Nessl said. “Yamaha produces the most high-performance, toughest and off-road capable vehicles, and is an avid supporter of the many lifestyles in which our products are used. This new GoPro promotion is another example of how Yamaha is supporting our customers’ lifestyles and exceeding their expectations.”