Minneapolis, MN – MB Quart, a high-end audio brand of Maxxsonics USA today announced a new agreement with Polaris® Industries Inc. (NYSE: PII), the leading manufacturer of off-road vehicles to offer new audio accessories for select Polaris off-road vehicles. MB Quart has been designing technologically advanced audio products for use in home, mobile and marine for more than 50 years. The entry into the Powersports market is a natural progression for the company. Audio accessories such as a jointly-developed wireless, waterproof Bluetooth audio system will be available at nationwide Polaris dealerships for select vehicles starting this September.

Baron Seals WORCS Championship with Win at Round 8

Minneapolis, September 17, 2014-Polaris Factory Racers were back in action at Glen Helen, in Devore, Calif. for WORCS Round 8. Polaris/Holz Racing’s Beau Baron would take another win to seal the WORCS Pro SxS championship for the second consecutive year. Starting in the front row, Baron would take second off the start and take the lead when Polaris Factory Racer Mitch Guthrie Jr’s car suffered an unfortunate mechanical issue. Another fellow racer, Polaris/Loan Mart/Holz Racing’s RJ Anderson would finish second moving him to fourth in the series points for the class. With one round left, Polaris Factory Racer Ryan Piplic sits in second in points with fellow Polaris Racer, Mitch Guthrie Jr. in third.“Polaris would like to congratulate Beau on another incredible season,” said Donna Beadle, Polaris Factory Racing Race Team Manager. “Beau and all of our WORCS Factory Racers, RJ, Ryan and Mitch, have done a great job keeping RZR on top of the box.”

Minneapolis, Sept 15, 2014-With summer break over, Team UXC Racing would head to GNCC’s Round 10, Unadilla, in New Berlin, NY.  Team UXC Racing had spent the break fine tuning their Scrambler XP 850 EPS which paid off with their first win on the vehicle for the season!Pro 4x4 Racer Michael Swift would start in the sixth position and fall back to seventh on a failed pass but would make up ground on the second lap passing four other contenders. With two laps to go, Swift would ride smart making up ground and with three miles to the finish, would pass the leader for his first win of the season and a second overall out of 425 racers.

Minneapolis, Sept 5, 2014 - Polaris RZR wanted to remind off-road enthusiasts of the new Camp RZR at Brimstone, in Huntsville, Tenn., on September 19-21. Known as a celebration of all things RZR, the first Camp RZR was held during the 2013 New Years weekend, in the Glamis Sand Dunes, in Calif. The event was such a success, it was repeated later that year over Halloween weekend. Polaris expanded the event internationally when the first-ever Camp RZR was held in the United Arab Emirates earlier this year.

Polaris Announces Partnership with the University of Minnesota’s Gopher Football

MINNEAPOLIS (September 2, 2014) – Polaris Industries Inc. (NYSE:PII), the leading manufacturer of off-road vehicles, today announced the company will be a 2014 corporate partner for the University of Minnesota’s Golden Gopher football program. “As a Minnesota-based company, we are excited to join Gopher fans across the state to support another favorite pastime of many of our local customers and dealers,” said Scott Wine, Chairman and CEO at Polaris. “We look forward to a successful season and partnership with Minnesota Gopher football.”

MINNEAPOLIS (Sept. 2, 2014) – Polaris Industries Inc. (NYSE:PII) today donated $10,000 to ALS after more than 100 dealers accepted an invitation from Scott Wine, Polaris chairman and CEO, to join him in taking the ALS Ice Bucket Challenge to raise awareness and funds for the disease. On Aug. 22, Polaris shared a video of Wine completing the Ice Bucket Challenge and in turn nominating Polaris’ network of dealers to do the same, noting that if 100 dealers accepted the challenge Polaris would donate an additional $10,000 towards ALS research. Within 7-days more than 100 dealers completed the challenge and in addition to submitting videos, many went above and beyond and also made personal donations.

Back in the Sand and Saddle at Camp RZR
Written By:
Staff 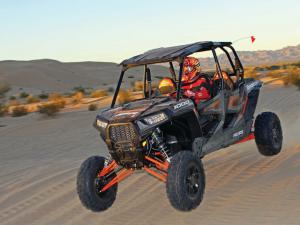 It was never a matter of if Polaris would build this model, but when, and when turned out to be a lot sooner than we imagined. Polaris has a pattern of releasing a new model, then following up with other versions within a year. As it turned out with their newest, baddest, hi-performance four seat machine, the RZR XP 4 1000 EPS, it was only a matter of months.

MINNEAPOLIS (August 22, 2014) – Today, Polaris Industries Inc.’s (NYSE:PII) Chairman and CEO, Scott Wine, completed the Ice Bucket Challenge, joining in the viral campaign to raise awareness and funds for ALS. After accepting the challenge from Dan Ariens, President and CEO of Ariens, Wine in turn nominated Bahram Akradi, Founder and CEO of Lifetime Fitness, Michael Guyette, President and CEO of Blue Cross Blue Shield MN, and the entire Polaris dealer network. Wine noted in his video that if 100 Polaris dealers accept the challenge, Polaris will donate an additional $10,000 towards ALS research.

Coastal Racing Takes Best in the Desert’s Vegas to Reno 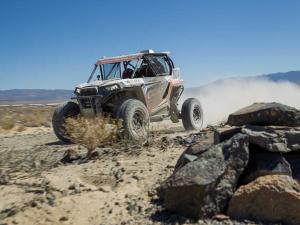 Minneapolis, Aug. 21, 2014–Vegas to Reno is known as the largest off-road race s in the U.S. spanning 534 miles. This year, 40 side-by-sides lined up, more than half being RZRs, to tackle the desert between the two cities. On the ATV side, Team UXC/Driven Powersports/Polaris Factory Racing would line up their Scrambler XP 1000 as the only 4x4 to tackle the race. Coastal/Holz Racing’s No. 1934 RZR XP 1000 would start in fifteenth with Scott Kiger and co-driver Tyler king starting the race. By Pit 6, where they’d have a driver change, Kiger had moved up to the top five giving Mark Holz and co-driver Rob Utendorfer great position to finish the race strong.