We hit the Glamis Dunes on Yamaha's Sport ATVs
Written By:
John Arens 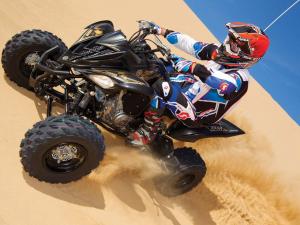 It all started as a way to escape the daily grind by playing around at the biggest sand box in the country.  Way back in 2002, the event was known as “Goons in the Dunes” and was more of an informal gathering of friends and riding buddies than an organized factory outing.  But like so many activities that take on a life of their own, the die for a tradition had been cast. 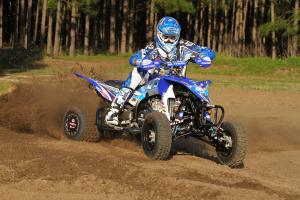 CYPRESS, Calif. – March 22, 2012 – Yamaha Motor Corp., U.S.A., is growing its support of the AMA ATV Motocross series with an expanded trackside support program and additional team rider for 2012.Yamaha has grown its AMA trackside support program to include the ATV Motocross series events this year. Pro Motorsports from Mt. Pleasant, Iowa, will lead this effort providing all Yamaha mounted racers with onsite technical assistance and Yamaha Genuine Parts & Accessories at discounted prices.Thomas Brown, who finished a strong fourth in the national MX series last year, is back and motivated to climb the podium in 2012. Chad Wienen, a veteran AMA ATV pro and multi event winner, has joined Team Yamaha this year and is excited about his new ride and the opportunity to put another YFZ450R on the podium. 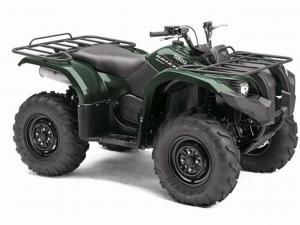 CYPRESS, Calif. – February 28, 2012 – Yamaha Motor Corp., U.S.A., the leading maker of ATV and Side-by-Side (SxS) vehicles for outdoor enthusiasts, has selected its 2011 National Hunting and Fishing (NHF) Day sweepstakes winner.As part of Yamaha’s ongoing support of NHF Day, the company will give a new Grizzly 450 Automatic 4x4 ATV to Adam Penton of Greeley, Colorado. Mr. Penton was one of more than 26,000 people who entered in the 2011 ATV sweepstakes. As an ongoing sponsor of NHF Day, Yamaha has aggressively supported the grassroots effort by donating one of its best-selling ATV models each year as a giveaway.The Grizzly 450 ATV, valued at $6,899, is assembled right here in the U.S.A. Yamaha is currently implementing a production transfer through the end of 2013 which will result in the majority of its worldwide ATV production being based in the United States. Currently, all Yamaha 4x4 ATVs are rolling off the production line in the company’s state-of-the-art facility, Yamaha Motor Manufacturing Corporation, in Newnan, Georgia.

Yamaha Gets back to Basics with their new YFZ450
Written By:
John Arens 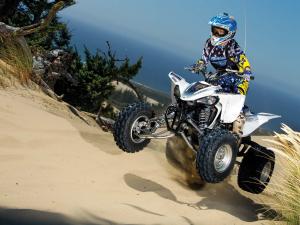 Twenty five years ago at Oregon’s Winchester Dunes, journalists got their first ride on Honda’s legend in the making, the TRX 250R. In production only 4 years, the 250R quickly became the standard for handling and performance that all sport ATVs thereafter would be judged by. By today’s standards, the TRX was narrow, had limited suspension, and put out only meager power, but as a package it worked. 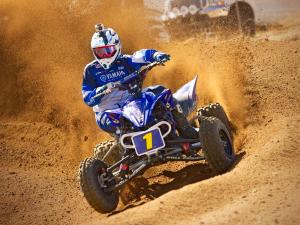 CYPRESS, Calif. – January 12, 2012 – Yamaha Motor Corp., U.S.A., has launched a first-of-its-kind promotion with GoPro, the world’s most versatile camera, to give away free HD HERO2 Motorsports Edition cameras to Yamaha ATV customers in the first half of 2012.Through the unique promotion, anyone who buys a 400cc and above Yamaha ATV* by the end of May will receive a free GoPro HD HERO2 (a $299 value) from Yamaha. Full details are on Yamaha’s website: http://tinyurl.com/Yamaha-GoPro 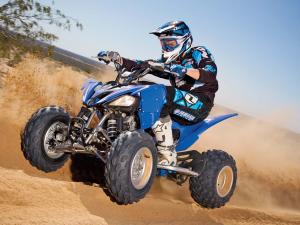 Every so often a model comes along that just does everything right. Yamaha’s Raptor 250 is one such model and without a doubt, it is the best ATV there has ever been for budding sport riders. It’s comfortable and the ergonomics are perfect for younger, smaller riders, it’s got a great, sporty look, the motor has enough zip to keep things exciting, it’s super reliable, and it’s easy to ride. 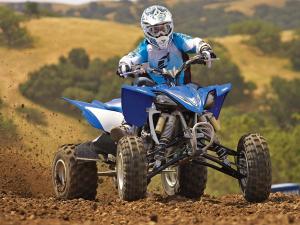 Yamaha owns the sport ATV segment. If you’re serious about your play time on the sand or the trails, you’ve got to check out any models of the Raptor lineup. If you’re looking for a championship, the awesome YFZ 450R can get you there.

The YFZ 450R is Yamaha’s high tech, race ready performance ATV that’s designed to kick dirt in the face of everything else. The YFZ 450R comes with excellent, racing quality shocks, a powerful, fuel injected motor, and a high tech, cast aluminum frame. Every part of the machine was designed with performance in mind. 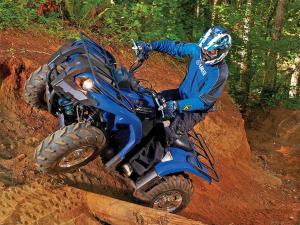 Last year Yamaha introduced the Grizzly 450 with EPS and we were impressed. The new Grizzly fit in perfectly with its larger brothers which are still sales leaders, offering many of the same features in a slightly smaller, more affordable package.

With Ruling in McTaggart vs Yamaha, Yamaha Now Victorious in all Rhino Cases that have Gone to Trial

CYPRESS, Calif. – NOVEMBER 15, 2011 – The Court of Appeals of Georgia today unanimously reversed a trial court’s May 2010 decision in favor of plaintiffs and ordered judgment for Yamaha in McTaggart vs Yamaha, a case involving an accident on a Yamaha Rhino. The Court of Appeals’ decision means that courts in all nine cases that have gone to trial have rejected plaintiffs' claims and found in favor of Yamaha.Yamaha stands firmly behind the Rhino and will continue to vigorously defend the product. The Rhino is a safe and useful off-road vehicle when driven responsibly, and has won virtually every “first in class” award and top safety ratings in independent reviews since its introduction.