CYPRESS, Calif. – December 12, 2012 – Yamaha ATV racing champ Traci Cecco-Pickens was honored this week by the city of Shamokin, Pa., for her successful ATV racing career.  At a ceremony Monday night including the city council and approximately 50 spectators including Traci’s family and friends, Mayor George S. Rozinskie, Jr., proclaimed December 10, 2012, as Traci Cecco-Pickens day in Shamokin and presented her with the key to the city honoring her as a historic competitor and role model for the city’s youth.“I’ve enjoyed 14 years of racing professionally, fought for nine championships and a created lifetime of memories,” Traci said of her career.  “I'm honored to receive this key and proud to say I'm from Shamokin – the city that provided me all the tools and resources that I needed to make my dreams come true!” 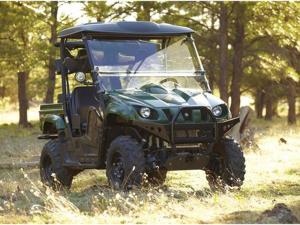 CYPRESS, Calif. – December 11, 2012 – Yamaha Motor Corp., U.S.A., the leading maker of ATV and Side-by-Side (SxS) vehicles for outdoors enthusiasts, has selected its 2012 National Hunting and Fishing (NHF) Day sweepstakes winner. As part of Yamaha’s ongoing support of NHF Day, the company announced that Nancy Watkins of Eau Claire, Wis., is the winner of the Rhino 700 FI.  Mrs. Watkins was one of more than 42,000 people who entered the sweepstakes, which is designed to help promote outdoors sports and conservation. The Rhino 700 FI donated for NHF Day – including Genuine Yamaha hunting accessories – is valued at more than $13,000.  The Rhino, along with all of Yamaha’s 4x4 products, is assembled at the company’s state-of-the-art manufacturing facility in Newnan, Georgia.

CYPRESS, Calif. – November 19, 2012 – Yamaha Motor Corp., U.S.A.’s, OHV Access Initiative – the industry leader in Guaranteeing Responsible Access to our Nation’s Trails (GRANTs) – approved new funding last month that will help seven different organizations across six states.These organizations are helping to implement Yamaha’s mission of supporting safe, responsible riding and open, sustainable riding areas through a variety of projects on the ground level.  Since its inception in 2008, the Yamaha OHV Access Initiative has funded nearly 200 such projects across the country. 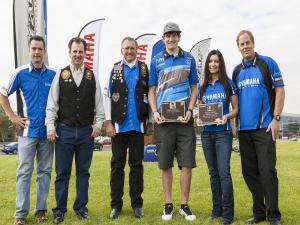 CYPRESS, Calif. – November 16, 2012 – Yamaha ATV Racing has captured 2012 season championships in motocross and cross-country, from North America to the Southern Hemisphere, all aboard the world’s most high-performance, race-dominating ATV, the YFZ450R. Yamaha employees gathered outside of the company’s U.S. headquarters in Southern California today to celebrate their champions and make their annual Feed the Children food drop along with the Star Touring and Riding® Association.  This year Yamaha helped raise more than $27,000 through employee donations and corporate fund raising efforts that will provide food and essentials for approximately 2,000 families across the country through next year.  Today’s food drop will support 400 families in Garden Grove, Calif. 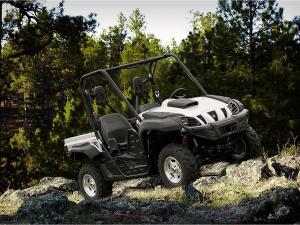 Cypress, Calif., October 31, 2012 – Yamaha Motor Corporation, U.S.A.’s, Parts and Accessories Division (YPAD) is offering a new Rhino Body Kit, giving owners yet another way to personalize their Yamaha Rhino Side-by-Side vehicles.The eight-piece collection includes a front bumper guard that mounts to the OE bumper, two-piece wraparound front overfender flares that extend the OE front fenders an additional 4.125 inches, rear overfender flares that add 3.375 inches to the rear fenders, and a shaker-style hood scoop.All components are made from double-walled and UV-resistant roto-molded linear low-density polyethylene and are designed to fit all Rhino 700, 660 and 450 models. 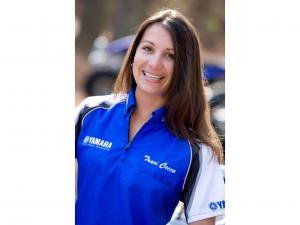 CYPRESS, Calif. – October 20, 2012 – Yamaha Motor Corp., U.S.A., is celebrating a historic weekend in Crawfordsville, Ind., at the Ironman Grand National Cross Country (GNCC) ATV racing event.  Traci Cecco-Pickens, long-time Yamaha rider and GNCC icon, has made history securing her ninth overall women’s ATV series title and announcing her retirement atop the Ironman podium.“This ninth championship is very special to me and by far will be the most memorable -- it is going to be my last championship,” Traci said.  “I am retiring from chasing championships.  With nine titles, my health, friends and memories for a lifetime, I finally feel this is the right time for me.” 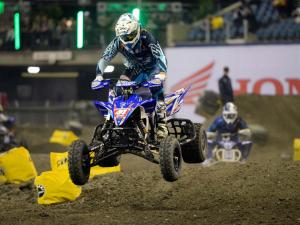 CYPRESS, Calif. – October 3, 2012 – Yamaha congratulates ATV racers Chad Wienen and Thomas Brown on taking the top two spots at the 2012 Montreal Supermotocross in Quebec this past weekend.  Wienen topped the podium and Brown finished second -- both aboard their YFZ450Rs -- in what became one of North America’s most competitive races this year in front of an estimate crowd of 40,000 fans.Four of the top five U.S. national ATV motocross racers competed along with top Canadians.  Wienen, who won his first Montreal Supermotocross back in 2009, capped a dream season after winning the AMA Pro ATV championship this year following a severe injury in 2011.

Ag Communicators of Tomorrow Can Apply for Individual and Chapter Scholarships

CYPRESS, Calif. – September 13, 2012 – Yamaha Motor Corp., U.S.A., is now accepting applications for the 2012-2013 scholarship program that provides financial assistance to members of the National Agricultural Communicators of Tomorrow (ACT).  ACT is a national college student association with more than 350 members located on 17 college and university campuses across the country.  ACT’s mission of fostering professional development is at the core of the Yamaha-ACT Scholarship Program, now in its fifth year.

The Raptor 700 Gets a Round of Updates and a New Home
Written By:
John Arens 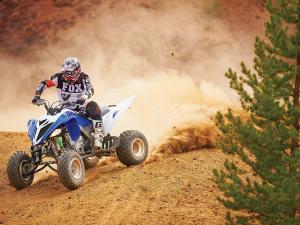 A little over a year ago Yamaha moved all production of the Grizzly ATV lineup to their Newnan, Georgia manufacturing facility.  It was a huge statement about the plant’s quality and production capacity, and it got the finished product closer to the end customer.  Now Yamaha is bringing production of their most popular sport ATV, the Raptor 700, to Georgia also, and while they’re at it they’re giving the Raptor a fresh look with a round of upgrades. 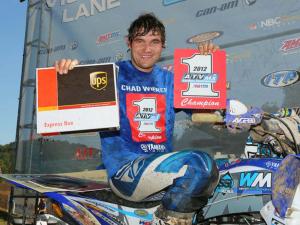 CYPRESS, Calif. – August 15, 2012 – Yamaha’s Chad Wienen secured his first AMA Pro ATV championship aboard his YFZ450R this past weekend at the 2012 season finale in Hurricane Mills, Tenn.  Thomas Brown, who finished an impressive fifth overall for the season, helped Yamaha secure the AMA Pro ATV Manufacturer’s title. Racing a Yamaha YFZ450R for his Wienen Motorsports team this year, Wienen put together a smart pair of 3-4 moto finishes on August 11 to claim the historic championship with a 31-point advantage over his nearest rival. In all, Wienen took six wins and 10 straight podiums in his first season racing for Yamaha.