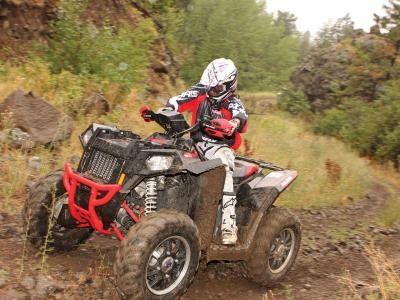 Every time other companies begin to catch up, Polaris just presses their foot on the gas a little harder.  Watching the ATV and Side x Side lineups of major manufacturers evolve over the last several years reminds us very much of a race, and in many ways it is.  Rather than on the motocross or circle track, this race plays out in the showrooms, board rooms, and accounting offices.  We do our best to stay impartial, but after a while, we almost feel a little sorry for some of the other guys.

Five years ago, Polaris made a commitment to rework every model in their lineup, and they have.  For 2013 even their beloved Ranger 800, a model we picked as best in its class, has been redesigned, and for ATV riders who linger on the sporty side, there is a new Scrambler ATV as well.

The Ranger has always been a HUGE hit with sportsmen and women.  When introduced it bridged the gap perfectly between strictly utilitarian models like Kawasaki’s Mule and John Deere’s farm loving Gator.  The Ranger offered better suspension, more power, more load capacity, and more features than anything before, and just like the Sportsman ATVs, it was equally at home working around the yard or hauling a whitetail back to the hunting camp on the weekend.  As capable as the Ranger already was though, Polaris decided to introduce an all-new design for 2013. 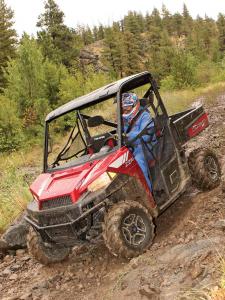 The 2013 Ranger XP 900 is based on all Polaris had learned with the existing Ranger and what so many owners had loved, but just about everything else is an all-new design.  At the heart of the Ranger XP 900 is the Pro-Star engine Polaris has been dropping in new models for more than a year, but this version has been specially tuned for the demands of the new Ranger.  Rather than racing across the desert or up huge dunes, this engine is designed for a slightly smoother power delivery but with the brute torque to tow 2000 pounds of whatever you want to hook behind it.  The 875cc dual cylinder, EFI equipped engine is rated at 60hp, considerably lower than on its racy cousins.  As with every Polaris, the engine is mated to a CVT style transmission with High, Low, Neutral, Reverse, and Park.  The “Park” position is a new feature as well, and the previous 800 models relied on a mechanical parking brake to prevent rolling.  Also unlike previous Ranger models that contain the engine under the seat, the new Ranger XP 900 has the engine located much farther back in the chassis which helps the cab area remain quiet.  Since the Ranger is also designed for plenty of hard work, Polaris increased the cooling capacity, including more efficient cooling of the belt and CVT, and they gave it their strongest belt ever.

Polaris developed an all-new platform for the Ranger XP 900, and the new chassis is designed to be stronger and stiffer with less chassis flex.  It’s also slightly larger than the 800 with overall size listed at 116.5L x 60W x 76in H.  Ground clearance is listed at 12 inches which should get you over about any obstacle on the trail.  At the front and the rear of the Ranger 900 are dual A-arms with 10 inches of travel, again slightly more than on the 800.  The standard model comes with steel wheels while cast aluminum wheels are available in option packages.  Dual piston hydraulic disc brakes are used to bring everything to a quick, controlled stop. The overall weight of the new Ranger XP 900 is listed at 1360 pounds, which is about 100 pounds more than on previous models.  We like how Polaris used common fasteners on the entire unit and grease zerks at pivot points making maintenance easier.  Oil filter access is much easier as well and you can get to the filter from the front, top side of the engine; although you’re going to want to do it when the engine is relatively cool since the filter is fairly close to an exhaust pipe.  The air filter is located behind the engine but the intake location is high enough it should stay dry unless you really get in deep.  While the chassis and engine features on the Ranger XP 900 are impressive, it’s the ergonomics that really complete the package. 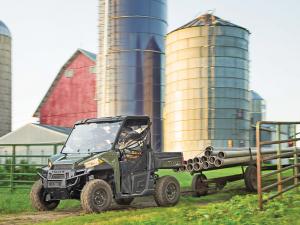 The new Ranger XP 900 gets its styling cues from the previous model Ranger, but with a little more edgy look and feel.  It portrays an all business image, ready to take on whatever work or trail you put in front of it.  Styling is more than just for looks however: body panels are designed for function as well and the occupants are well protected from mud, splashing water, and intruding branches.  Inside the crew compartment is the standard three person bench seat sculpted to hold you in place, a tilt wheel, a dash glove box, plenty of open tray storage, and a couple cup holders.  On the dash are the shift lever and the switch for the on-demand, all-wheel drive.  Leg room has been increased and steering effort reduced as well, especially with the EPS (electronic power steering) model.  Thankfully, the driver’s seat is now adjustable and the fuel fill cap has been relocated to the driver’s side also.

Polaris has always been a leader in storage and in this area the Ranger XP 900 excels.  The composite rear bed is rated for 1000 pounds, and under the seat is a second cavernous storage box that’s big enough it could double as a kiddie pool or a live well for fish.  One of the most impressive features, however, is the factory accessory integration.  Polaris is a leader in designing their vehicles to work with the factory accessories and with the Ranger 900, they took that concept to a whole new level.  Even the roll cage tubes have a channel to work as a perfect solid stop for the factory doors, and we easily installed a roof, front and rear windows, and door that fit perfectly.  It’s an extremely impressive system, and a very impressive new Ranger.  We can’t wait to get one on our turf for a complete test. 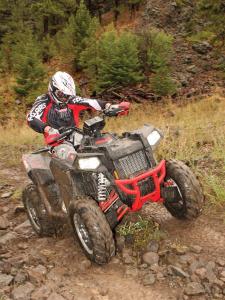 One of the most popular ATVs of all-time has finally faded into history as Polaris has retired the Scrambler 500.  For those looking for a sporty ride with 4wd capability, there is a new model ready to take its place, and this one has double the power of the Scrambler 500.

The new Scrambler XP 850 H.O. is the largest displacement sport machine Polaris has ever built and it is designed to both offer thrills and challenge Can-Am’s Renegade models for sporty 4x4 fun.  The new Scrambler is based heavily on the Sportsman 850 model, but without the racks.  Nearly every dimension and spec is identical to the Sportsman 850, and the engine is the dual cylinder, EFI equipped motor with dual counter balancers and 77 horsepower.  In our experience, the 850 engine has been extremely reliable, it has gobs of power, and it runs very smoothly.  Like all Polaris models, the new Scrambler uses a CVT style transmission, yet when the trail gets sticky - or downright flooded with mud and water – the Polaris On-Demand 4wd is ready to help pull you through. Suspension on the base model is handled by SACHS shocks, but the Limited Edition model gets Fox Podium compression adjustable shocks, Electronic Power Steering, aluminum wheels, hand guards, a custom cut sewn seat, front LED lights, and Stealth Black paint with a sportier graphics package.  Both the standard and the LE model Scrambler XP 850 H.O. come with a nifty front bumper with integrated tie-down points, an analog gauge package, and a sporty, stainless steel exhaust system.

Bodywork styling on the new Scrambler is “unique” to say the least.  To be honest, we’re not overly fond of all the styling cuts, the minimal front fenders, and the multiple angles and lines, but beauty is based on personal taste and many may love it.  Regardless of what one thinks of the bodywork though, it will be an incredible ride. 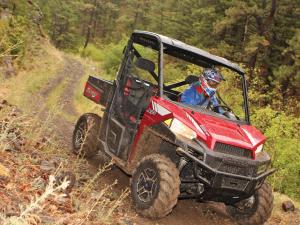 The Ranger XP 900 wasn’t the only new model in the Polaris lineup for 2013, and Polaris grabbed their powerful and reliable existing 800 engine and dropped it into the immensely popular mid-sized Ranger chassis.  The mid-sized chassis offers many of the features of the full-sized Rangers, but it also fits in the back of a full-sized pickup.  The new model is called the RANGER 800 EFI and promises to be another home-run for Polaris.

The RZR line dominates the high-performance category and for 2013, the RZRs get a round of upgrades as well.  The smallest displacement model in the lineup, the RZR 570, is now available in a Trail Limited Edition package which comes with Electronic Power Steering (EPS) and for the first time on a RZR, the electronic Engine Braking System (EBS), and Versatrack Turf Mode.  It also gets high/low headlights and finally some storage, thanks to a glove box and an under hood storage case.  The case is waterproof and can easily be removed and carried with a couple handles.  PURE Polaris will offer the case as an accessory for Model Year 2011 and 2012 800cc RZRs.  The RZR 800 gets a suspension upgrade with dual rate springs for increased ground clearance.

Hi-performance enthusiasts have loved the RZR XP 900 since it was introduced, and the 900 is now available in a Walker Evans Limited Edition version with EPS. The unit features 2.5” Walker Evans shocks, new seats, Maxxis Bighorn tires on Black Crusher rims, and a custom graphics package.  Perhaps the most important feature, however, is with the engine.  The engine is now a wet sump engine making oil changes easier and providing more cargo deck space.  All RZR models also get new, easier adjusting seat belts.

Five years ago, Polaris made a commitment to redesign every model in their lineup, to introduce new model ATVs and Side x Sides, and to never let up.  They’ve done all of that and more, and they show no sign of slowing down anytime soon.  We can’t wait for the next five years.