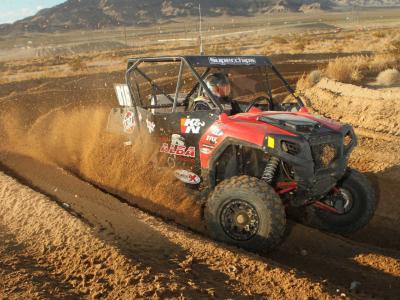 Minneapolis, Feb. 11, 2013-After the swamp-like conditions at Canyon MX Park, in Peoria,

Ariz., last month, the dry weather of Primm, Nevada for WORCS Round 2, Buffalo Bills, was a welcomed change! RZRs would, once again, take the top spot in all the side-by-side classes offered.

Polaris Racing/Holz Racing’s Beau Baron would, once again, steer his new RZR XP 900 to the win in the Pro Production class and first overall. Second would go to Ryan Piplic also in a RZR XP 900. Baron and Piplic sit one, two in the series standings after two races.

The Production 850 class had Alfredo Ramirez and Chris Willing take first and third in RZRs. The Production 600 class, once again, only had one entry, Amelia Morton, who finished the race first.

The next WORCS race is Crazy Horse, in Lake Havasu City, Arizona, March 22-24.