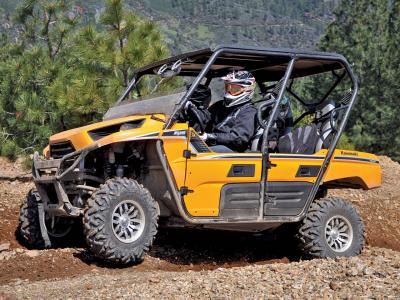 We’ve always liked the standard Teryx and it’s been practically bullet-proof.  Thankfully, the new Teryx4 750 4x4 carries many of the same design features such as a beefy frame, durable bodywork, and a strong, mid-mounted, EFI equipped, 749cc, liquid cooled, V-Twin engine designed specifically for the loads of a Side x Side.  Thanks to the torque of the smooth running engine, steep hills are no problem but the engine also provides considerable braking assistance, especially in low.  Throttle response is instant with no lag from the injection system or the clutch.  However, the throttle angle was sometimes a little awkward.

We like the styling of the TERYX4.  It’s very automotive like with a dash and center console sculpted to fit around the driver and passenger, and the seats are EXTREMELY comfortable.  They’re formed to hold you in place and are well padded, with an integrated head rest.  They also come with three point seat belts that won’t dig into your chest.  The new Kawasaki Teryx4 750 4x4 is stable, precise handling, very comfortable, and most of all fun.  For tight trails like those at practically every riding area in the East, it excels, just as it was designed to. 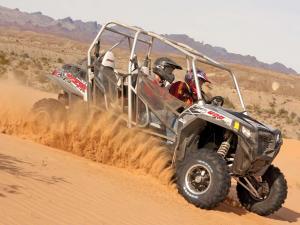 The Polaris RZR-4 XP900 gets the nod for open terrain, dunes, or anyplace you can put the go-flipper to the floor and let it run.  Because of its longer wheelbase and larger turning radius, tight woods and twisty trails are not its forte’, but it does have more than a few areas in which it excels.  The RZR-4 XP 900 is powered by the same awesome motor as the two-seat RZR XP 900 and rides on a nearly identical front and rear suspension.  In the whoops, the RZR-4 ride is outstanding - perhaps the best of any model regardless of class - thanks both to the excellent FOX shocks which are highly adjustable, and the longer wheelbase.  Inside the passenger area, virtually everything is identical to the award winning, desert conquering, two-seat XP 900, it’s just that now there are two more people you can scare.  With the engine slightly further back, the noise level is reduced even more.  When four of you head out on the trail or the dunes in the RZR-4, we guarantee you’ll have a great time.  We ALWAYS do.