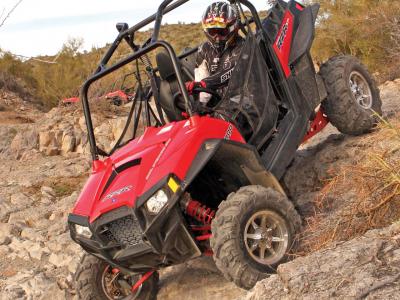 Polaris started the year off with a bang when they released the new RZR XP 900. It was a high performance Side x Side that had only been the stuff of aftermarket dreams and after one ride we were hooked. Visually it’s got the looks of a RZR on steroids with the same styling as other members of the RZR family, and most of the bodywork is the same with the exception of the long skirt that partially hides the lower chassis members and long travel suspension. It’s really the suspension and motor that makes the RZR XP 900 something special though.

The XP 900 engine is called the ProStar 900. It’s actually an 875cc, liquid cooled, DOHC, twin cylinder engine fed by Electronic Fuel Injection. Polaris claims a maximum 88 hp, 73 mph, and 29% better acceleration than anything else. Whatever the final numbers are, the new ProStar 900 has got it where it counts! Engine power is impressive and is well matched to the chassis.

Desert racers have long used a trailing arm type rear suspension for maximum wheel travel and the XP 900 comes with 14 inches of it right from the factory. At the front are a set of long, dual A-arms offering 13.5 inches of wheel travel and as a package, it works awesome. At both ends are premium quality, Fox Podium X 2.0 piggyback reservoir shocks and total width of the extra wide suspension is now 64 inches. Point the XP at the whoops, press the throttle to the floor and it floats across with ease. In the sand or in the whoops, nothing can touch it. Today the high performance category is again expanding with recent announcements for 2012, but the awesome Polaris XP 900 is our pick for High Performance Side x Side of the Year. It’s a new standard of performance. [img_assist|nid=1159|title=|desc=|link=node|align=left|width=300|height=225]