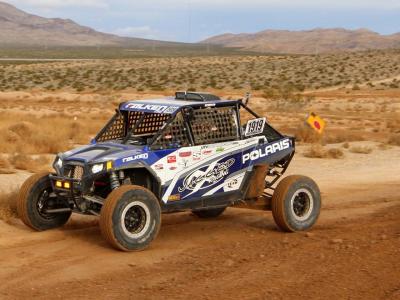 Minneapolis, Dec. 4, 2012–With the Best in the Desert Championship up for grabs, the BITD Henderson 250 would determine the fate of the teams in the running.

Scott Kiger and Mark Holz in their Coastal Racing No. 1934 RZR XP 900 came into the race trailing the leaders by a mere four points. Matt Parks and Jason Spiess in their No. 1932 RZR XP 4 900, and Brandon Schueler and Blake Van De Loo in their No. 1919 RZR XP 4, both from Team Polaris/Jagged X racing, have had an up and down year and were looking to end the season on a high note.

The race got underway at day break and Schueler and Parks started in seventh and eighth place in the side-by side-start.  Parks got the hole shot on Schueler and then set sail to catch the leaders.  By the end of lap one, Parks was in third place with Schueler within one minute of Parks in fourth.  The second lap was tough because the side-by-sides had started catching a lot of the motorcycle and ATV classes and had to work their way past the slower riders in the dust.  But, Parks and Schueler were able to catch and pass the first and second place cars and came into the pits in the physical lead at the end of lap 2.  Both Parks and Schueler stopped in the pits for fuel and then just drove the final lap conservatively on their way to the checkers and finished within a minute of each other.

“What a great way to finish the season with a 1-2 finish for Jagged X,” said Parks. “We won the first race of the season, but had some gremlins in the middle part.  But it is great to get the win here at the final race at the Henderson 250.”

Kiger and Holz of Coastal Racing were able to capture a third place finish by just 7 seconds over the fourth place finishers Justin Lambert and Justin Sheakley of Cognito Motorsports in their RZR XP 4 900.  The strong finish from Kiger and Holz gave them enough points to win the 2012 Best In The Desert Pro UTV Championship. The first place finish by Parks moved him up one spot to finish third in the championship. The top three UTV in the championship were separated by just seven points at the end of the season. Park’s RZR XP 4 900 averaged 49.29 mph during this race making this the fastest UTV race ever in the Best In The Desert series. Jagged X also would see success in the Sportsman class with Bill Schueler and Mike West in their near-stock RZR XP 4 900 taking the checkered flag.

“We would like to congratulate the Coastal Racing team on winning the championship their inaugural year,” said Donna Beadle, race team manager for Polaris. “With such an exciting end to the 2012 season, we look forward to another great season next year.”