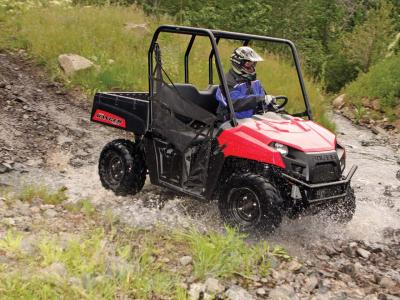 There are companies that have a knack for finding opportunities in the market and then building a product to fill it. The Disney people never build a ride without a movie, toys, and a happy-meal to go with it, and in the powersports world, Polaris has always managed to find that untapped group of potential riders that didn’t quite find what they needed with existing models. Since the Side x Side market is relatively new, it’s been the habit of most manufacturers to concentrate on their top of the line models. Polaris has done that as well, but at the same time they never forgot those left behind. By filling the needs of all types of riders, they’ve quietly become the powerhouse of the power sports world. Think of the multi-passenger RZR4, the first, true sport Side x Side RZR800, the hard working Ranger Crew, and one of their best models, the mid-sized Ranger 500 EFI.

We’ve been using the Ranger 800 XP for a couple years for everything from farm work, to hauling wood, to grounds work on the local little league diamond. Regardless of whether we’re hauling bales or bats, the Ranger 800 XP has been outstanding, always ready for whatever we ask of it. It’s a well-designed, well finished machine with excellent power, comfortable seating for three, plenty of storage, and the ride is the smoothest in the industry. We love it, but not everybody needs or even wants a full sized, high horsepower machine; there-in was the opportunity. Polaris quickly answered the call with the Ranger 400 then followed it up with the Ranger 500 EFI, but rather than being stripped down, junior versions of their top of the line models, both machines come with plenty of the features and capabilities of their bigger brothers. 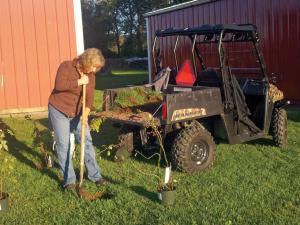 We usually list the specs and features of a machine before we give our review, but not this time. We’ll get right to it: The Ranger 500 EFI is OUTSTANDING! It’s almost a little embarrassing to sound like cheerleaders for the Blue Team, but it’s impossible not to like the Ranger 500 EFI.

The Ranger 500 EFI is built on the same sturdy, steel platform as the Ranger 400, which means it is slightly smaller than the full sized Ranger XPs. A 32 horsepower, 498cc liquid cooled, 4-stroke engine fed by Electronic Fuel Injection easily powers the Ranger 500 along, and even with huge elevation changes or steep grades, the engine carried us up and down steep trails with no problem. We were especially glad to have electronic fuel injection which pretty much guarantees easy starts regardless of temperature or elevation, and it’s a feature we normally wouldn’t expect on a value class machine like this. Top speed is 44 mph, which is actually slightly faster than some other manufacturer’s best machines. Regardless of the speed or RPM, though, the engine purrs along quietly. Just like other Ranger models, the engine is mounted under the bench seat. Polaris uses their PVT transmission on the Ranger 500 which features HI, Low, Neutral, Reverse and Park, and most of the time we ran it in High. For any heavy load hauling or steep hills, we shift it into low and it still gets up to speed quickly but with a little more torque and a lot less stress on the belt. The Ranger 500 EFI does offer another unique feature in that it can be equipped with an optional SPEED key which limits top speed to 23 mph. That should keep speed under control with work crews and less experienced riders. 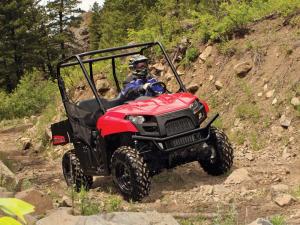 Full sized Ranger models are known for their comfort, and the Ranger 500 EFI does not disappoint in this area. We appreciate how easy it is to get in or out of the Ranger 500, and even though the bench seat is built for two, it is very comfortable. Controls are well placed, the steering wheel is at a good level, leg room is sufficient even for taller riders, and the seat belts don’t dig into your shoulders. Pedal angle on both the brake and throttle seems very good and they provide good feel and feedback to the driver without any jerky, lurching caused by incorrect throttle angle. On the dash is the gear shift lever, a closed dash box, two open storage areas, the 2wd/4wd switch, lights, and a center mounted instrument cluster that includes an odometer, fuel level indicator, and speedometer. There is even a pair of cup holders! One unfortunate thing we’ve managed to do on three different Polaris models is put a small crack in the floorboard. It happens during ordinary trail use when a thick stick flies up from the front tire and jams into the floorboard. It’s probably just a fluke, but we wanted to let you know. The most important feature on the Ranger 500 EFI is the Certified Roll-Over Protective Structure (ROPS). We’ve never had one upside down to test it, but it’s nice to know it’s there. 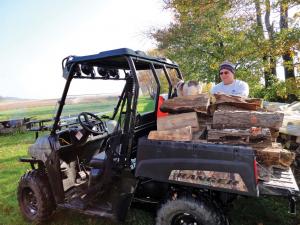 The Ranger 500 is built for work and it has no problem handling just about any job you can throw at it. Even though the Ranger 500 is a mid-sized machine, its hauling and towing capabilities are rated higher than some top end machines from other OEMs.

Just behind the seat is the super tough, tilting cargo box with gas lift assist, and the box is rated for 500 pounds. We probably exceeded that several times with fire wood, but it didn’t really seem to bother the Ranger. Another feature of the rear cargo box is Polaris’ plug and play, Lock & Ride cargo system that accommodates a ton of accessories.

Towing a trailer is no problem, thanks to the 2 inch receiver hitch, and the Ranger 500 is rated for a whopping 1250 pounds. We even used it to pull a potato digging plow and it easily popped spuds from the ground as fast as we could walk behind it. 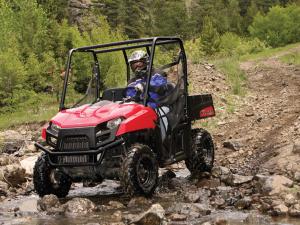 Polaris loves to talk about the ride of their Side x Sides and for good reason. The ride is extremely smooth on the top of the line Rangers, but it’s also very good on the mid-sized models. Independent Rear Suspension (IRS) with 9 inches of wheel travel and five-point adjustable shocks allow you to dial in the suspension for whatever you’re hauling. At the front the full sized XPs have an advantage with their dual A-Arm system, but the mid-sized Rangers continue the long Polaris love affair with MacPherson struts. Unfortunately, the struts don’t offer the same adjustability as a shock, but they still deliver an adequate ride. For front mounted equipment like a snow plow, it would be nice to have adjustability, however.

When the going gets tough, the Ranger 500 offers the Polaris On-Demand 4 wheel drive system which is easily engaged with a flip of the dash mounted switch. Normally we ran the Ranger in 2wd but it also features the VERSATRAC TURF MODE which unlocks the rear differential for easier, tighter turns that won't tear up your grass. We definitely appreciated the 10 inches of ground clearance which helps you clear trail obstacles as well. In whatever mode you choose, though, the suspension easily handles rock and stream crossings, rutted trails, and mud. About the only thing we would change would be the steel wheels which we’ve managed to bend lately. A nice, cast aluminum, aftermarket wheel would provide extra insurance, especially on long rides back to the deer camp or far from the truck or cabin where you don’t need any trouble. 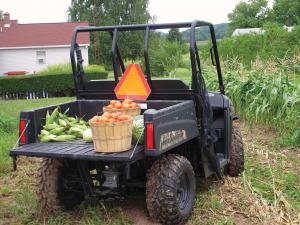 One thing we absolutely love about the Ranger 500 EFI is the handling. It is extremely easy to maneuver around obstacles. Even without power steering, it was super easy to pick our way between the rocks and trees. Steering radius is very tight, almost as tight as an ATV, and this is one Side x Side that doesn’t need power steering.

The nimble, maneuverable, highly capable Ranger 500 is capable of pretty much every task as its larger brothers, but it’s a little easier to take along since it will fit in the back of most full sized trucks. Also, because it’s slightly smaller, it also takes up a little less space in the garage. Given a choice, we’d leave the Ford outside; we like the Ranger better! We’ve also installed a few common accessories most riders choose for their Ranger, and we installed a windshield, a roof, and a front storage rack from Seizmik. The rack makes hauling all our wood cutting tools a lot easier and leaves the box open for firewood, and the roof and windshield make a huge difference in passenger comfort. For cold weather we’ve also slipped on an enclosure by Seizmik.

It’s our job to find out what every machine can and can’t do so you aren’t surprised later. We’ve used the Ranger 500 EFI day in and day out for everything from garden chores, to hauling wood, to deer hunting and there is a lot to love. The suspension easily handled everyday work chores or trail rides, power was very good and well matched to the chassis, it starts and runs great, it’s extremely maneuverable, and it steers EXCELLENT. The Ranger 500 EFI can handle practically every hard working task of its larger brothers and it offers huge value for the price.

Polaris has once again hit a home run by offering a machine in a category no other OEM was even servicing. The Ranger 500 EFI is extremely capable and it’s one of the best units on the market regardless of size. Polaris didn’t just hit a home run; they knocked it out of the park.