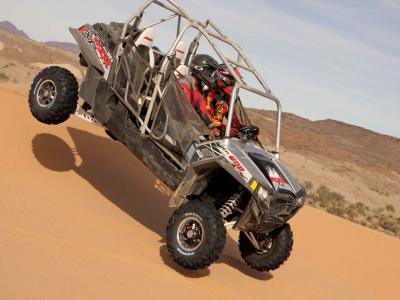 We spent the better part of last summer running around the north woods on the friend and family friendly, four seat sensation called the Polaris RZR4.  Regardless of whether we were in the driver’s seat or the back seat, it’s impossible not to have a great time on the RZR4 thanks to the long wheelbase, super stable platform, and silky smooth, stock FOX shocks.  It’s a blast to cruise down the trail on the RZR4, but we always felt it could use a little more power.  Big hills would give the RZR4 all it could handle, especially with a full load of passengers, and climbing giant sand hills at the Silver Lake dunes was an exercise in picking the best line, mashing your foot to the floor, and hoping for the best.  Sand sucks the power out of every vehicle and it definitely showed the limits of the RZR4’s engine.  Don’t get us wrong, we still loved it; but we didn’t really expect Polaris to make huge changes to the RZR4, especially since they had already released a new RZR 570 and RZR XP 900 earlier this year.  As it turns out, they were just getting warmed up. 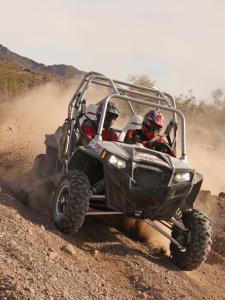 We were stunned when Polaris told us they were soon to release a third new RZR model for the year, especially when the existing RZR4 had so much going for it already.  Ever the eager ones to help out, it didn’t take us long to grab our gear when we were offered a test session with the new machine.

The design of the new RZR XP-4 900 clearly follows Polaris’s new design philosophy for sport models which is built around long travel suspension, the Pro-Star engine which was developed exclusively for Side x Sides, and a new modular transmission.  Visually, the new four-seater looks very much like a longer version of the two-seat XP900 released earlier in the year, and overall styling leaves no doubt it is a member of the RZR family.  Most of the bodywork and the interior features are identical to the two-seat version as well.

Seating position on all the RZR models has you tucked down inside the vehicle with your legs out in front of you rather than feeling as if you’re perched on an upside-down milk crate.  The RZR seats are spaced a little closer than on some competing units, but they’re still comfortable and we like the easily adjusted tilt steering.  On the dash is a combination digital/analog gauge package, and the shift lever is found between the seats.  Just ahead of the passenger is a rubber mounted hand hold which we guarantee they’ll be using often, and Polaris installed a durable, composite bushing in the handhold stem this year for vibration isolation.  We also really like the good sized, sealed glove box under the dash.  Both the front and rear seats are identical, although big guys seated in back could use a little extra knee room.  Thankfully, the rear passengers have a solid cross bar to hold onto and their seats are slightly elevated for a better view of the thrills ahead.  Side nets have done a good job of keeping us secure in the RZR 4 in the past, and Polaris is again using the net system on the new RZR XP-4 but with a new buckle.  A sturdy roll cage structure protects the occupants just in case the unthinkable happens.  With the performance the new XP-4 is capable of, you definitely want to be securely inside the vehicle.  Between the comfy, high back seats, the three point belts, and the side nets, we always felt secure inside the new XP-4 regardless of the terrain or who was driving. 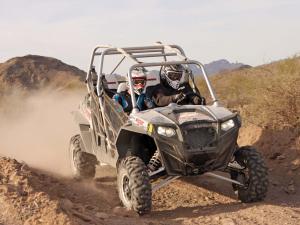 The RZR XP-4 900 shares the same high performance, 875cc, liquid cooled, twin cylinder, EFI equipped engine and transmission with its two seat brother.  We appreciate that Polaris engineers considered normal maintenance tasks when they designed the new motor and the air filter, oil filter, drain plug and dip stick are all easily accessible.  Above the left rear tire is a unique air intake system designed to duct clean air efficiently into the dual throttle bodies, and a massive plenum holds a large volume of filtered air at the ready for when you crack the throttle.  Overall distance to the throttle bodies is relatively short which makes for instant throttle response and the flat, automotive style filter with large surface area should provide excellent filtration for all day rides.  A large radiator is safely tucked under the front hood and even the bodywork has been designed to aid cooling by ducting hot air away from the vehicle.  Tucked into the front bodywork is a pair of high output, LED lights. 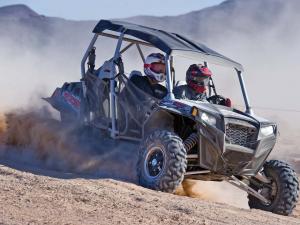 The XP-4 900 engine is paired with Polaris’ modular CVT transmission featuring Park, Reverse, Neutral, Low, and High, but it’s the design of the transmission that matters most.  Gearboxes and drive shaft angle changes rob power and the transmission was designed for efficiency by eliminating all unnecessary shaft direction changes, but it was also designed to handle the large spike loads common to Side x Sides.  The result is more power to the rear wheels and a quieter transmission.  We were especially happy to find the CVT cover is easy to remove for when it eventually comes time to change the belt.

There’s nothing like strapping yourself into a new performance machine and pointing it at the open desert.  As we fastened our camera bag down and settled into the RZR XP-4’s seats, everything felt right at home and we couldn’t wait to see what it was capable of.  We flipped on the key, let the EFI pump kick on, and a second later the 875cc, liquid cooled, twin cylinder engine sprung to life with a healthy growl.  Just like with all RZR’s, the engine is mounted behind the rear seats and this offers a couple major advantages.  The rear mounted engine allows for a lower seat height and lower center of gravity, but it also has the happy effect of reduced noise to the passengers.  When you put the go flipper to the floor and point the XP-4 at the whoops, though, you can expect the passengers to make a lot of noise on their own! 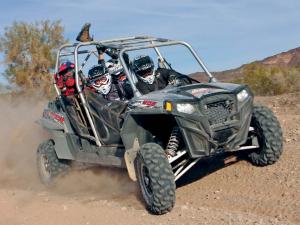 Like its two seat cousin, the new XP-4 900 comes with excellent ground clearance and long travel suspension, thanks to dual A-arms in the front and a three link, trailing arm system at the rear. Serious desert racers have long used a trailing arm type suspension for maximum rear wheel travel with minimum geometry change through the shock stroke, and rather than plastic or rubber suspension pivot bushings, Polaris went all out with spherical bearings at main pivot points.  Wheel travel is 13.5 inches front and 14 inches rear, but that wouldn’t mean much without a quality set of shocks.  Unlike the FOX shocks found on other models, Polaris outfitted the XP-4 900 with very racy, high quality Walker Evans shocks that are rebound, compression and preload adjustable.  The front units have a 2.0-inch diameter main tube, while the rears get a larger 2.5 inch body designed to carry the extra load of a couple portly back seat passengers. 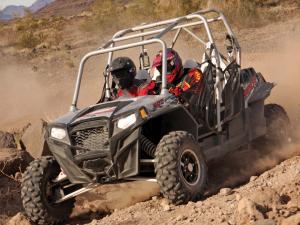 As much as we praised the RZR 800 for its smooth ride, the new RZR XP-4 900 is even better.  We pointed the XP-4 into a long whoop section that had been part of the Parker 400 race course the day before; it was hardly a smooth, drive through the country.

We blasted through the first mile of whoops with the throttle down, and the XP-4 900’s suspension soaked up any choppy, square edged whoops with ease.  In the knee deep whoops, however, we found ourselves bottoming a little too easily, but we pressed on until our first stop of the day when we could make an adjustment.  We measured the shocks all around to insure the springs were set equally, and our initial judgment was to stiffen them up three clicks on the adjuster knob.  This made a HUGE change - too much actually, and it had the effect of being too harsh and kicking us around pretty much everywhere.  At our next stop, we dropped it down one notch (two stiffer than the stock setting), and this was acceptable in the really deep and rough sections, but it was still a little harsher than needed.  Finally, at our third stop, we dropped it down one more click (only one stiffer than stock), and we really liked this setting with only two people on board.  This eliminated virtually all bottoming but still delivered a very smooth ride.  The optimum setting is probably at about 1-1/2 clicks stiffer than stock.  When it was time to haul a full load of passengers, we again clicked it up to two over stock and it delivered the same smooth ride with almost no bottoming.  Regardless of the setting, however, there is one thing we noticed about the stock shocks – they get HOT HOT HOT.  Even the adjuster knob is difficult to grab, and you could probably leave fingerprints on the main body tubes.  This will definitely cause oil breakdown and loss of performance sooner rather than later and you might as well get acquainted with a good shock builder who can freshen them up for you on a regular basis.  It will be worth it! 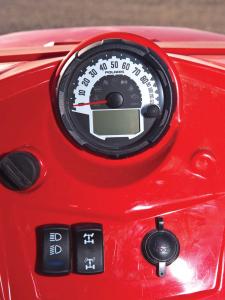 The new Pro Star 900 engine definitely gives a much bigger “kick in the pants” feel than the 800.  Stab the throttle at any point in the powerband and the engine delivers an addicting, healthy roar and an immediate reaction.  We also didn’t notice any flutter or vibration in the steering wheel as compared to the same engine in the two seat version, most likely due to the different chassis.  Under power the transmission shifts very well with no noticeable lag, even when back shifting and then jumping right back on the throttle, and the engine does offer a significant amount of engine braking.  When you need to stop in a hurry, four wheel disc brakes easily get the job done.  As we said earlier, though, sand is the real test of power, and after prowling around the desert for half a day, we managed to find some good sized dunes where we never expected.

It didn’t take us long to find our way into the sand and as we pointed the RZR XP-4 900 uphill, the extra horsepower was immediately obvious.  Where the 800 engine would lag slightly, the 900 climbs with no hesitation.  She’s got it where it counts!  Whether in the whoops, on straights, or in the sand, it works extremely well; although for full throttle conditions, we would prefer a different throttle angle.  The throttle lever makes the engine reach half throttle quickly, but then it takes a much longer throw to reach full rpms, and it can be awkward lifting your foot from the normal position to accommodate it. 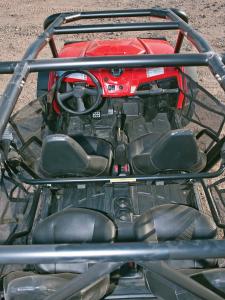 There is so much to like about the new Polaris RZR XP-4 900, we’ve only scratched the surface.  It’s not without a significant price, however, and the Limited Edition, Electronic Power Steering model is knocking on the never before broached price of 20K.  Still, for its ability to haul 4 people and scare the bejesus out of three of them, it’s an absolute blast, and it’s actually cheaper than many other options.  Considering that the price of a high horsepower, specially built sand rail can easily be north of 60K, the XP-4 could be considered a bargain.  At any price, though, we don’t think you can have any more performance or ready-made fun for the whole crew than with the Polaris RZR XP-4 900.