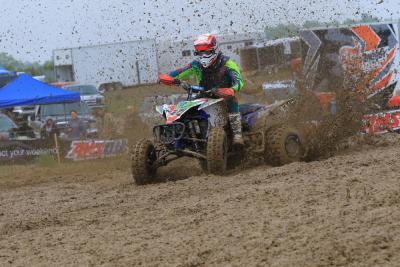 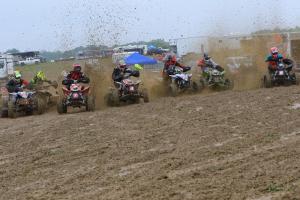 Anaheim, Calif. - May 24, 2017 - Heavy rains made for extremely muddy conditions, but that did not slow down GBC Motorsports racers at the inaugural X-Factor GNCC in Peru, IN. GBC racers set the course ablaze and secured numerous class victories, while one longtime GBC racer would end the day with a new career achievement 23-years in the making.

Following the early morning youth race, the 10am riders lined up and prepared for what was to be an extremely challenging day on the course. GBC Motorsports rider Doug Robey has been solid in 4x4 A competition this season, but took things to a new level at the X-Factor by finishing a season-best 4th place in the morning overall. Meanwhile, Ken Robey returned to winning ways with his fifth 4x4 Senior class victory of the year, earning a season-best 16th place in the morning overall along the way. 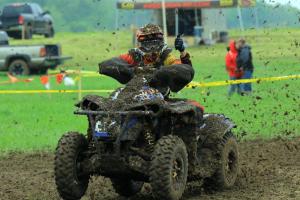 Jordan Phillips led the way in the 4x4 Pro class with a 5th place finish, good enough for 10th overall. Fellow GBC rider Rob Smith earned himself a top 20 in the overall with the 17th position. Paul Holleron added a podium with a 3rd place podium in the Silver Masters class, his fifth podium finish of the season.

After a slight weather delay, the afternoon class riders would line up to take their turn on the slick and muddy course. GBC Motorsports’ Landon Wolfe used the superior grip on his Ground Buster III tires to take the holeshot award before falling into the middle of the pack during the first lap. Meanwhile, Johnny Gallagher was pushed through the fence and forced to the back of the pack with a lot of ground to make up. By the halfway point, though, Gallagher had fought his way back and was battling with the race leader. On the final lap Gallagher spotted an opportunity to make the pass and seized it, taking the lead and going on to cross the line as the checkered flag few.

"Honestly it's still sinking in right now, I just pushed hard and had myself in good position all day,” Johnny recalled after the win. “With a few miles to go I took my shot at the lead and made it stick. My big 22" XC-Masters were hooking up like crazy in places where everyone else was struggling, that was really the key to this win today.”

This was Gallagher’s first career overall GNCC victory in 23 years of racing. Landon Wolfe would go on to finish 5th, while Marty Christofferson and Tucker Wyatt finished 7th and 8th, respectively. Matt Lindle earned his season best overall of 7th place after finishing 2nd in the XC2 Pro-Am class. 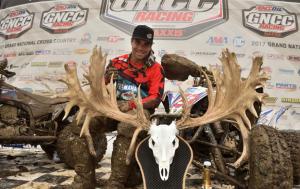 Nick Mastrangelo added a class win in the Junior A competition, cracking into the overall top 20 for the first time this season. Fellow GBC rider Zach Wright joined him on the podium in 3rd place. Jeff Pickens was on the Vet A podium again, this time with his 14th place overall finish marking his best of the year. David Kyte won the Junior B class for the first time this season, while Vet B rider John Sousa finished on the podium in 3rd place.

Round 7 of GNCC racing is set for May 27-28 at Sunday Creek Raceway in Millfield, OH. Learn more about GBC Motorsports ATV and UTV tires at www.GBCMotorsports.com, and follow us on Facebook, Instagram and Twitter for the latest updates.