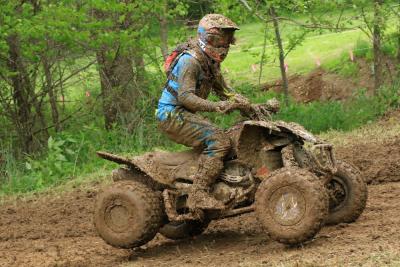 Anaheim, Calif. -  2016 - The Limestone 100 GNCC in Springville Indiana always offers a challenge for the competitors and a thrilling spectacle for the fans! This year’s edition was made especially challenging due to the several inches of rain falling the week prior and even the morning of the race. The team of GBC Motorsports supported racers pulled through the difficult conditions to grab class wins and overall podium finishes!

In the premier 4x4 Pro class it was the duo of Jordan Phillips and Rob Smith who used the superior grip of their GBC Dirt Commanders to pull them through the mud and ruts to the top two spots in their class as well as the 1-2 overall positions after 2 hours of battling! “Jordan and I were able to use lines the others couldn’t simply because we were getting such awesome traction,” Smith said about the race. “Everything went great today and I’m happy to be up here on the box.”

Spencer Modlin has been clicking off impressive finishes in the 4x4 A/B class all season. With another 2nd place finish Modlin tightens the championship points gap between himself and leader Ronald Varndell, who finished 4th on the day. We are excited to watch these GBC racers battle throughout the remaining 7 rounds! In other morning races Kara Merritt earned a solid 4th place finish in the WXC class, keeping her in the thick of the championship points battle! 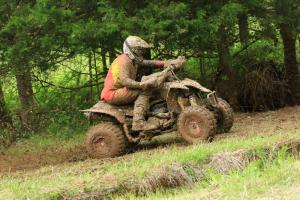 The ruts were incredibly deep and the Indiana clay was slick as ice by the time the 1pm pro race got underway. There was an intense battle between GBC’s Landon Wolfe and Johnny Gallagher that took place throughout nearly the entire race. When the mud finally stopped flying It was Gallagher who crossed the line in 7th in XC1 mere seconds ahead of Wolfe in 8th.

Marty Christofferson overcame a bad start and some mid-race struggles to rebound for a solid 4th place in XC2 and continues to keep the points chase close! The Junior A 22+ class was dominated by GBC riders, led by BNR’s Nick Mastrangelo who grabbed his first career A class win and lifetime best overall finish! “My XC Racers were amazing today,” Mastrangelo said with a big smile after the race. “I was passing guys everywhere and thinking to myself ‘man I bet they wish they had GBCs.’” Dustin Piggot had a season best performance with a 2nd place aboard his XC Master equipped Derisi Racing machine, and Jeff Miller completed the 3 rider class podium sweep with his 3rd place ride. 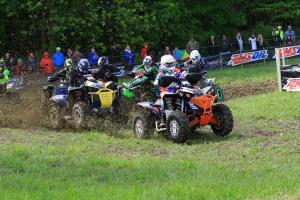 Brian Filicky pushed through the tough conditions to earn 2nd in the Junior B class. Cory Blinkiewicz topped the Vet B 28+ class for the 3rd time in 2016 with an astonishing last lap last turn pass for the win!

GNCC will make its next stop in Millfield, Ohio for the John Penton GNCC May 28-29. Learn more about GBC Motorsports ATV and UTV tires at www.GBCMotorsports.com, and follow us on Facebook, Instagram and Twitter for the latest updates.