The Most Powerful Polaris Ever - The Scrambler XP 850 H.O.
Written By:
John Arens 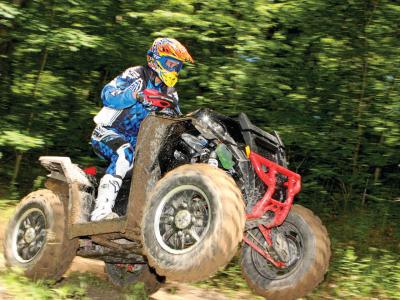 We wondered when Polaris would build this model.  After all, there has scarcely been a day in Polaris history when there has not been a Scrambler ATV in the lineup.  Through the years the Scrambler had become synonymous with a sporty ride wrapped in a 4-wheel drive, do-it-all package, yet the existing Scrambler models were based on previous generation chassis and engine packages.  While the Polaris utility ATV lineup had evolved with ever more powerful engines and advanced, better riding chassis’ the poor Scrambler 500 had seemingly fallen from favor.  That all just changed.

The new Scrambler XP 850 H.O. is the largest displacement sport machine Polaris has ever built and it’s designed to both offer thrills and challenge Can-Am’s Renegade models for sporty 4x4 fun.  It’s also designed to give Polaris a legitimate GNCC racing machine that can challenge the yellow bikes on the track where they have enjoyed a long run of championships.

The Scrambler XP 850 is based heavily on the Sportsman 850 with nearly identical chassis and engine specs.  When introduced, the Sportsman XP chassis marked a radical change to the Sportsman lineup.  Gone were the MacPherson struts and instead the new chassis came with dual A-arms front and rear, with the geometry optimized for wheel travel and minimal suspension angle changes throughout the shock stroke.  Polaris calls it “Rolled Rear Suspension” but what it equates to is a little rake in the suspension design that allows it to crawl up and over obstacles much easier than a flat mounted A-arm where the wheels basically slam into them.  It works!  The Limited Edition Scrambler 850 comes with 26-inch Carlisle AT 489 tires mounted on 14-inch matte black cast aluminum wheels, while the standard model comes with stamped steel wheels. 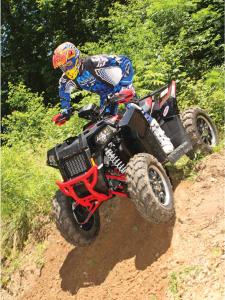 There are two other major differences between the standard Scrambler 850 and the LE model.  The LE model comes with Electronic Power Steering and high quality, Fox Podium X shocks with adjustable spring preload and compression damping.  All other specs are identical however, and both models are listed at over 30 pounds less overall weight than the Sportsman 850.

The Scrambler XP 850 H.O. engine is a dual cylinder, liquid cooled, EFI equipped motor with dual counter balancers and 77 horsepower, which is 6hp more than on the Sportsman 850.  Thanks to EFI, the engine always starts and runs beautifully, and we’ve found it to be extremely smooth.  One difference between the standard Sportsman 850 and the Scrambler 850 is the exhaust and the Scrambler gets an aggressive, sport style, stainless steel exhaust that gives a powerful, throaty rumble that hints at the power within.  While slightly louder and more aggressive sounding it’s still quiet enough that it won’t offend others on the trail.  One unique feature on all the XP style ATVs is an engine that is mounted longitudinally or “sideways” in the chassis. The advantage is better power delivery as the drive shafts protrude straight out the front and back of the engine.  A second major advantage is greatly increased belt life as the CVT cases are cast with the engine, eliminating any flex or misalignment.

We’re also happy to report maintenance is easy on the 850.  Polaris likes to commonize parts wherever possible between their different models, thereby making it more efficient for manufacturing and for dealer parts stocking.  Both the air filter and oil filter are standard Polaris parts your dealer will have on hand.  Changing the simple spin-off oil filter is a breeze, and an excellent, large, handy dipstick is found on the side of the engine.  The air filter is located in a compartment under the seat and can be removed with no tools.  Once removed the simple cartridge style filter can either be gently cleaned or replaced.  In our experience the 850 engine has been extremely reliable, it has gobs of power, and it runs very smooth. 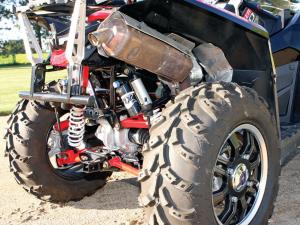 Like all Polaris models, the new Scrambler uses a CVT style transmission yet when the trail gets sticky - or downright flooded with mud and water – the Polaris On-Demand 4wd is ready to help pull you through.  Shifting between Park, Reverse, Neutral, Low and High is with a cast aluminum, straight shift gear selector found inboard of the rider’s right knee.  To be honest the lever looks like it’s something you would never want to ram your knee or any other delicate parts on but when riding we never found it obtrusive or even noticed it.

Polaris definitely went for an aggressive, “edgy” look with the styling on the new Scrambler 850XP.  It’s got so many cuts, angles, and recessed areas we wonder if they were trying to stay off radar.  We could even call it “Picasso-esque” and all that keeps it from the old masters portfolio is two headlights on the right and one on the left.  Nobody is going to mistake this for any other model.  In the saddle the Scrambler 850XP feels very natural though, and we like the seat which gets a racing inspired, raised rear section which helps hold you in place under aggressive acceleration.  Thanks to the engine being mounted sideways in the chassis it also feels narrow between the knees and feet, and it’s easy to become very comfortable on the new Scrambler 850.  After many miles we’ve even become almost fond of the styling.  We also really like the color-matched A-arms and front bumper. 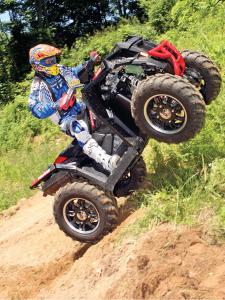 Rather than front racks like the Sportsman models, the new Scrambler 850 XP gets a front cargo deck with a couple tie-down points.  At the rear is a minimalistic, composite rack with a capacity of 25 pounds which is more than enough for a little camping gear or cooler.  It’s still a Polaris though which means a receiver hitch is found at the rear, and the machine is rated to tow 1500 pounds.

At the center of the steering column is a digital instrument cluster while to the right is the ignition key and 12v accessory outlet.  We really like the Polaris thumb throttle and housing on this model also.  Below the driver’s feet is an excellent set of floorboards with a nice, grippy, raised peg area, and with the engine mounted sideways in the chassis Polaris was able to reduce the distance between the driver’s feet and knees.  The result is an ATV that is extremely comfortable to sit on.

Nobody came back asking for more power from the Scrambler XP 850 H.O.  With all the power at your right thumb we’re very glad and a little relieved to report the handling is very predictable.  Electronic Power Steering makes handling even better and it was easy to put the big Polaris where you wanted on the trail and it would hold its line even at high speeds.  Ride quality is extremely smooth and the suspension soaks up trail chatter and bumps easily.  We did stiffen the rear suspension by one click for the bigger hits, but overall the suspension reacted very well with no kicking or swapping at medium to high speeds.  It’s comfortable, powerful, and predictable.    The engine also runs extremely smooth and every rider really likes the sound as well.  We also like the Scrambler tires which clean out well in heavy, sticky mud, but they also do an admirable job in sand or on casual trail rides. 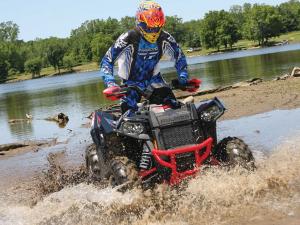 About the only thing we would really like to have on the Scrambler 850XP H.O. is independent front and rear brakes, and more aggressive rear brakes.  On a sporty machine with the kind of power the Scrambler 850 produces brakes are every bit as important as throttle, and an integral part of performance and handling.  On this model a brake on each handlebar would be a welcome feature.

The Polaris ATV lineup just wouldn’t be the same without a Scrambler model in it, and the new Scrambler XP 850 H.O. is by far the most powerful, fastest, most capable, and most expensive Scrambler yet.  In fact, with a fully equipped - full racks, a winch, sealed storage, and a 3rd headlight - Sportsman 850 costing almost $1400 less, it’s a little tough to justify the extra expense of the Scrambler XP 850 H.O.   Then again, there is nothing like it, and we expect a Scrambler XP 550 to join it in the lineup this fall.  Until then we’ll keep the thrills coming with this one.